The August Wilson Society (AWS) is thrilled to announce the September 19, 2019 launch of the August Wilson’s Ground Annual Lecture Series, a forum whose mission is to advance August Wilson Studies by facilitating cutting edge and currently relevant multidisciplinary critical perspectives on Wilson’s American Century Cycle plays and by encouraging informed discussions on the enduring relevance of his life and literary legacy. 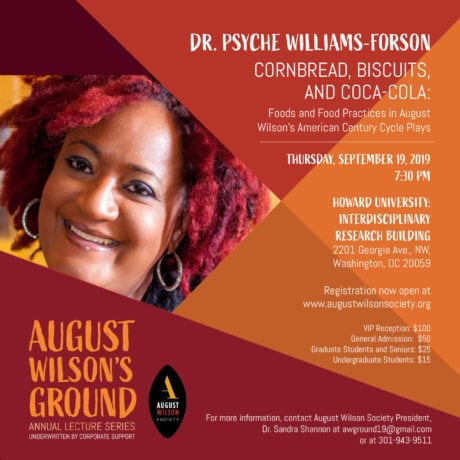 To commemorate the start of this historic lecture series in grand fashion, AWS will host, in advance of the evening’s 7:30 p.m. inaugural lecture, a VIP Reception and Fundraiser set to begin at 6 p.m. at the same location. Funds raised at this event will go toward the creation of a scholarship fund for undergraduate students in the performing and visual arts and to support the continued work of the organization. The official naming of this scholarship and the announcement of its first recipient will take place at AWS’s March 2020 Colloquium to be held at Pittsburgh’s August Wilson African American Cultural Center.

The evening’s program will include comments from dignitaries, live jazz band entertainment, an exciting auction of tickets to Ford’s Theatre’s upcoming production of Fences, a tribute to AWS Charter Members, and a performance by students from Howard University’s Theatre Arts Department—all this and more while being treated to libations and heavy hors d’oeuvres.

To register for the VIP Reception & Fundraiser and the inaugural August Wilson’s Ground lecture, visit the AWS website at www.augustwilsonsociety.org For more information, contact August Wilson Society President, Dr. Sandra G. Shannon, at awground19@gmail.com or at 301-943-9511.

Ticket prices are $100 for the VIP reception and $50 for general admission to the lecture. Prices include reduced rates for graduate and undergraduate students and for retirees.

The August Wilson Society defines itself as an interdisciplinary learning community of instructors, students, and theatre lovers who remain dedicated to commemorating August Wilson’s legacy by promoting the studying, teaching, researching, performing, and ultimately the safeguarding of the rich narrative of the African American past that Wilson has bequeathed to us in the form of 10 plays that chronicle the stories of African Americans from 1904 to 1997.