Theater – including musical theater – has long been used as a medium for analysis of societal issues and concerns in a way that is more entertaining than an essay or lecture. Miss You Like Hell, now playing at Baltimore Center Stage, follows in the tradition of works like Hair, Cabaret, and Rent, addressing its moment in history with stories that help elucidate political concerns for a wider audience. This musical with book and lyrics by Quiara Alegría Hudes and music and lyrics by Erin McKeown reaches into the zeitgeist to produce a work that could not possibly be more timely, relevant, and important. 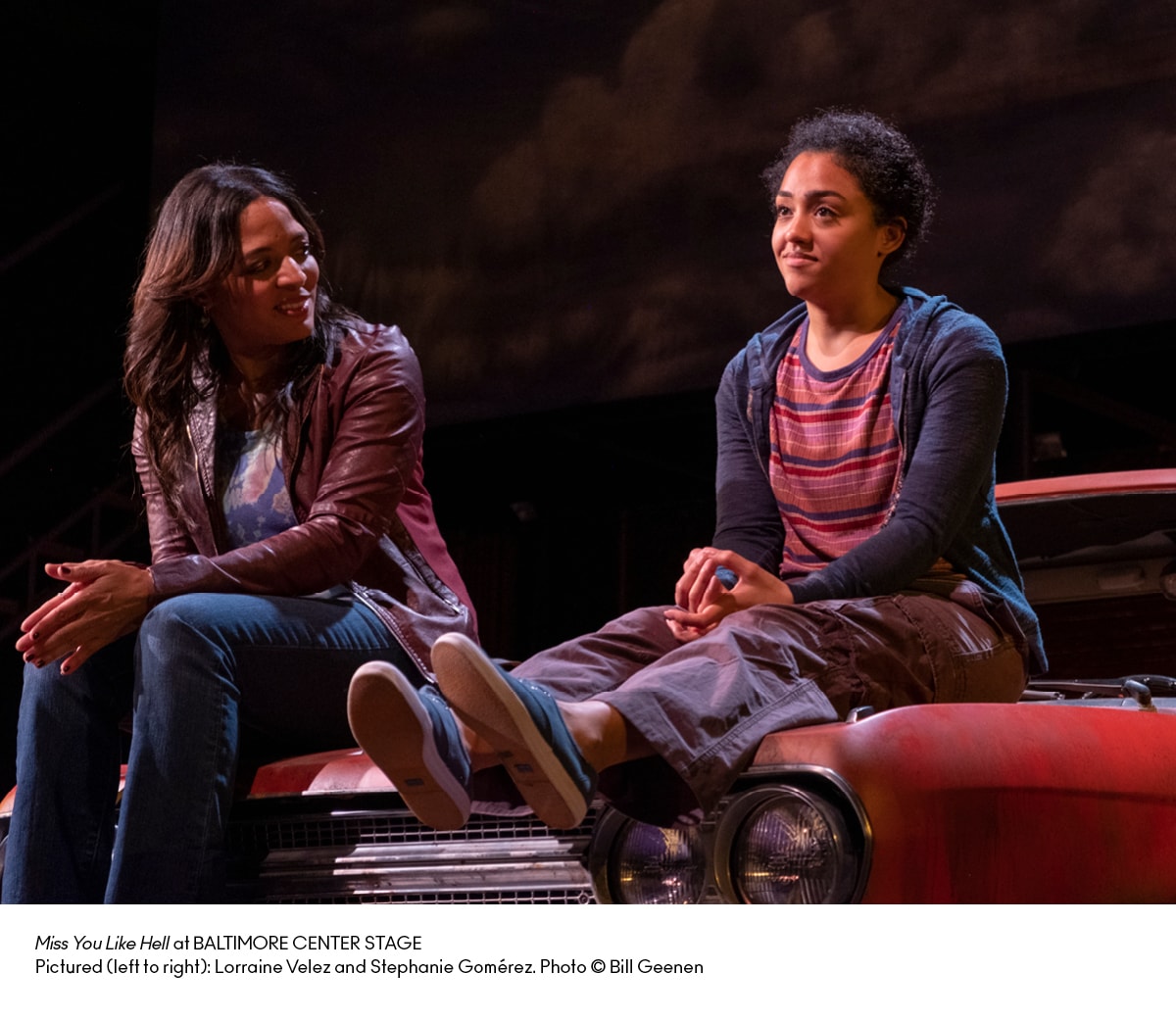 Before the show begins, a voice-over encourages the audience to react and respond to what they witness on the stage in front of them, to essentially become a part of the evening, not just a witness to it. This briefest of moments goes a long way toward hinting that a subtle revolution is happening behind and within the Baltimore Center Stage production of Miss You Like Hell.

On the most basic level, Miss You Like Hell is the story of a mother-daughter road trip across America, but its real strength is what it has to say about more complex issues. Beatriz, the mother, has rushed to her daughter’s side after reading about the girl’s suicidal thoughts on her blog. Olivia, the daughter, has written off her mother – going so far as to tell everyone that she died – because she cannot understand the years of abandonment. Meanwhile, the trek across the States comes with a deadline, because Beatriz must get to her immigration hearing, hoping that she can convince Olivia to testify and perhaps prevent possible deportation.

Director Rebecca Martínez and Musical Director Tiffany Underwood Holmes waste no time in grabbing the audience’s attention. A dark stage becomes a sea of flashlights and movement as the focus turns to the woman at the center of the stage. From the moment Lorraine Velez, as Beatriz, opens her mouth to sing the first notes of “(Prayer) Lioness,” it is clear this is going to be a powerhouse performance. The chemistry – albeit tension-filled from the start – with on-stage daughter Olivia is immediate and captivating. Stephanie Gomérez fully embodies the soul of a troubled sixteen-year-old struggling to understand her place in the world. Along with excellent skills as dramatic actresses, both of these women possess deeply affecting vocal technique, thrilling the audience with each new solo number.

Another “revolutionary” thing this production does involves the use of foreign language. Because some of the audience may not speak Spanish, when dialog or lyrics that are extremely important to the storyline are spoken/sung in Spanish, they always find a way to work in an English translation so all audience members can follow along. But there are times when non-essential Spanish phrases are not repeated in English, which in some ways makes the action on stage feel that much more authentic. 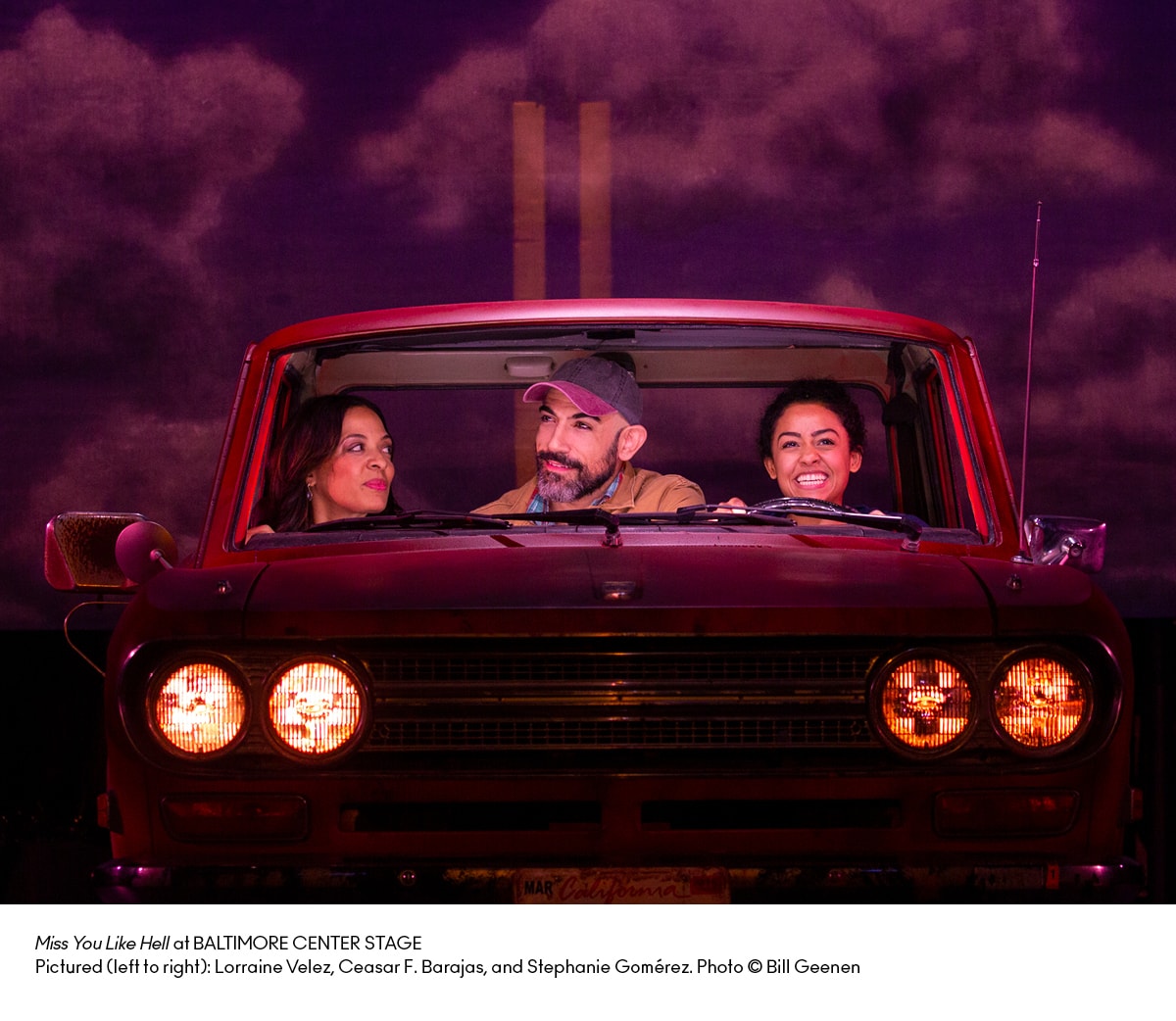 The blend of musical styles within Miss You Like Hell feels fresh and original. This show does not sound like other shows, and much of that credit goes to the onstage orchestra performing Erin McKeown’s music. This band’s members, Daphne Benichou, Zak Branch, Frank Carroll, Soojin Chang, Mary Ann Perkel, Diego Retana, and Tiffany Underwood Holmes, provide the sonic backdrop on which this story unfolds. A moment like the “Dance With Me” number late in the show could not feel as spontaneous as it does without the precise timing of this collection of musicians.

Alex Perez’s choreography at first seems a bit stylized, maybe even bordering on silly, but when the audience observes how fully-committed this ensemble is to this movement, they will easily turn themselves over to the delight and smiles the dancing inspires. This ensemble, many of whom take on other minor roles, is composed of Gisela Adisa, Anthony Alfaro, Ceasar F. Barajas, Jaela Cheeks-Lomax, Jono Eiland, Calvin McCullough, Michael Medeiros, Rachel Stern, and Raphael Nash Thompson.

Within the minor roles, there are several standouts–Ceasar F. Barajas as Manuel, the love interest for Beatriz, first and foremost. Anyone who has had a mother, grandmother, aunt, or close friend teach them how to cook will be instantly transported back to that kitchen as Manuel sings the emotional “Tamales.” Jaela Cheeks-Lomax’s memorable turn as the National Park Docent and fan of Olivia’s blog posts is punctuated by her stellar vocals, making “Yellowstone” and its reprise one of the musical highlights of the evening. As an interracial gay couple our mother/daughter duo meet on their travels, Raphael Nash Thompson and Michael Medeiros add another layer of diversity to this storyline and make the most of their all-too-brief stage time. Their love duet, “My Bell’s Been Rung” has a vintage Broadway feel, as though maybe it was a lost Cole Porter tune, but giving it to this gay couple represents another of the indirect ways Miss You Like Hell forces the audience to reconsider their long-standing views and expectations. 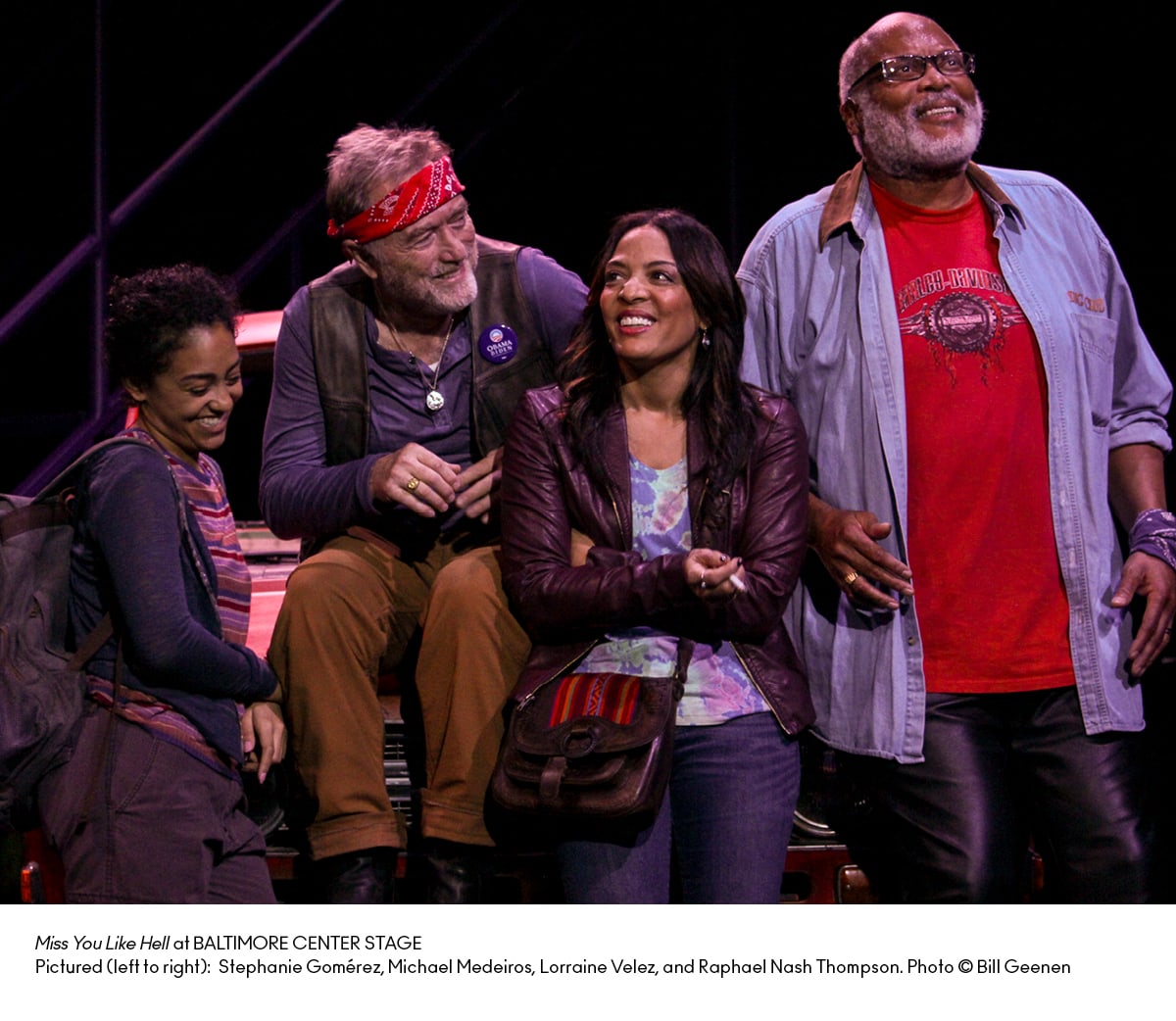 Reid Thompson’s set design, Harry Nadal’s costumes, and Elizabeth Mak’s lighting design work together seamlessly to transport the crowd. In particular, the front end and cabin of the truck are extremely impressive and used to full effect throughout the show, often combined with some beautiful scrim work and lighting effects. One of the iconic moments within the show involves a vehicle crash caused by a turtle trying to cross the road. You simply have to experience how affecting this over-the-top scene ends up being.

A song near the middle of the show called “Baggage” works well as a centerpiece theme of the piece. As Olivia and the gay couple unite to free Beatriz from jail, the various meanings of family are examined – both the family we are born with and that which we choose. But also when these actors sing the simple lyric “family is as family does” it is impossible for audience members not to think of the human family in general and how we must stand together to fight injustice.

The Baltimore Center Stage cast of Miss You Like Hell tackles a challenging subject matter in an honest and authentic manner, never offering platitudes or easy answers, but always aiming for (and hitting) the audience’s heart in order to elicit compassion and understanding. In the end, the double yellow traffic lines that have divided the stage all evening transform into a much more tangible symbol of the barriers that stand between humanity and true acceptance. Fortunately, the audience stands to fight in unity in the form of a standing ovation for this unforgettable musical journey.

Running Time: 1 hour and 45 minutes, with no intermission.