What a charmer is the fringy play Unexpected Turbulence. It’s an engaging, first-class “flight” with personable service provided by flight attendant Crystelle Desjardins (Alexander Burnett) who is on a mission to become the “Best Flight Attendant” for the 16th year in a row for Parisian Express airlines. Well, that might happen if the skies stay clear, and the passengers don’t become rowdy.

But then disorder and not-so-friendly skies develop. The more Unexpected Turbulence soared into chaos on its theatrical flight from Paris to Cincinnati with Desjardins trying to maintain good order, the more I felt in step with Desjardins as a person to spend an amiable hour with.

Unexpected Turbulence is an affectionate, multi-character performance by a sole actor, Alexander Burnett (currently training at the École Jacques Lecoq in Paris) who performs the show in drag.

Written by DC-based writer Steven Elliott and directed by Dylan Arredondo, Unexpected Turbulence begins as a straight-forward, but clearly tongue-in-cheek comedy. As the fictional flight falls into anarchy, it becomes a darkly comic piece full of high order physical slapstick with a camp sensibility. It is a glimpse into the life of Desjardins, a brassy flight attendant who is not having a good day as the First Class passengers become rather demanding.

Burnett performs as a fully-realized character and brings along a bevy of other characters in a number of short skits that flow into each other to become a whole. As Desjardins, Burnett permits “big” monologue, does interactive scenes with several passengers, and performs a delicious lip-synching, karaoke style of one those infamous airline safety addresses as a half-dozen or so characters each wanting their own spotlight.

At its true core, Unexpected Turbulence is the story of a woman at a personal and professional fork-in-the-road. She is just trying to overcome a deep well of self-doubt and fulfill her dream to be the best she can be. 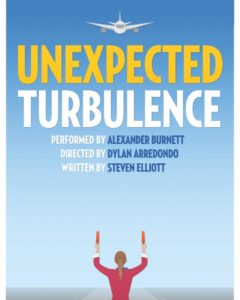 When the audience meets Desjardins, she is primly-attired in a flight attendant uniform of a well-fitted claret-colored jacket, a white blouse, a silk scarf around the neck, and indigo skirt with hem a few inches above the knees, the epitome of a class act. Add in reserved makeup including stylish mascara and lipstick for a polished look, plus black pumps with maybe 3-4 inch heels, a graceful walk, and a slight sway of the hips. As Desjardins, Burnett speaks with a crisp refined alto. When other characters appear such as other flight attendants or an old flame, Burnett gave each one their own plausible personality, whether female or male, older or younger.

Burnett is also a wizard at physical comedy. There were skills with a chair that left me in disbelief at what a body could do.

The Fridge DC is a small gallery in an alley off 8th Street SE in DC, and the simple set let the imagination fly free. There was a riser with two steps and a single chair. The 50 or so audience chairs became seats in the First Class section of an airplane. Dinner and drinks, imaginary ones, were served from a cart, with Desjardins serving. Amusing sound design by Jordan Friend added mad turmoil especially when economy class passengers had to be depicted.

Alas, Unexpected Turbulence was having only a two performance American debut. It is now closed. The production was here in the DMV, not long after its premiere at the 2019 Edinburgh Fringe.

Unexpected Turbulence was a fresh exploration into self-expression. I hope that flight attendant Desjardins returns to the DMV so more can find themselves on her next flight.

Running time: One hour with no intermission.