Now playing a limited Off-Broadway engagement at Irish Repertory Theatre, Irish playwright Conor McPherson’s Dublin Carol, which made its debut at London’s Royal Court Theatre in 2000, tells an old familiar story of a dissipated life and a family devastated by the damaging effects of alcoholism. But the present affecting production of the poignant three-hander, under the beautifully controlled direction of Ciarán O’Reilly, does it without resorting to maudlin sentimentality or over-the-top drunken brawls and shenanigans, focusing instead on the protagonist’s self-reflections, heartfelt regrets and sorrow, and newfound desire to reform. Can he?

It’s Christmas Eve in Dublin, 1999, and John Plunkett, a hard-drinking middle-aged employee and resident at a local funeral home, has just returned from a burial with the hospitalized owner’s 20-year-old nephew Mark, who ably assisted him that day. Inside, John begins to recount his painful history and the impact it had, not only on him, but on his estranged wife and daughter. The agonizing reminiscences continue after Mark’s departure, with the unexpected arrival of Mary, who hasn’t had any contact with her father for the last ten years, but has come to inform him that her mother is dying – terrible news that awakens in him even more haunting memories from their past, and an urgent need to decide how to deal with the present and future (a theme highlighted in the titular allusion to A Christmas Carol – Charles Dickens’ iconic novel of transformation and redemption).

In an award-worthy debut with Irish Rep, Jeffrey Bean turns in an unforgettable performance as John, capturing the full range of emotions and psychology of a man grappling with shame and guilt, and continuing to self-medicate with the whiskey that has only served to exacerbate his problems. His characterization is heartrending and empathetic, conveying an understated mood of loneliness and despair, punctuated with brief bouts of anger and tears, and occasional bursts of sardonic joking and laughter to mask his inner torment. Every move he makes, every inflection he employs, every mood he embodies is thoroughly believable and profoundly impactful.

Lending fine support to Bean is Cillian Hegarty as Mark, who possesses “a good listening quality” – in marked contrast with John’s traditional “Irish gift of gab.” He is at first polite, but awkward and anxious to leave, then increasingly open and ultimately sympathetic, as their drinks change from tea to the omnipresent whiskey. Rounding out the excellent cast is Sarah Street as Mary, the ambivalent daughter who expresses both love and hatred for her father, who shares with him both good memories and bad, laughter and tears, and whose cathartic visit inspires him to try to make amends, not excuses, while recognizing that “I’m sorry is not enough.”

The set design by Charlie Corcoran is modest, with a mostly monochromatic brown palette that bespeaks the drab earthiness of John’s existence, Christmas decorations and a large cross on the back wall as a reminder of the Christian tradition of sacrifice, salvation, and forgiveness, and an up-close-and-personal scale of the room that renders his distressed revelations all the more intimate. Costumes by Leon Dobkowski are equally somber and unassuming, and Ryan Rumery’s original music underscores the heartrending drama with an appropriately bittersweet note.

Irish Repertory Theatre’s superb cast, sensitive direction, and compelling artistic design make for one moving and insightful production of Dublin Carol. It’s a consummate presentation of McPherson’s stirring examination of flawed humanity and a stellar show that should not be missed. 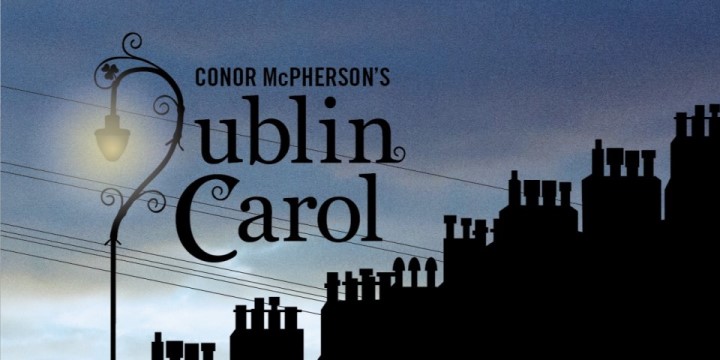