Gerald C. Wood is an author and expert on the brilliant Irish playwright and filmmaker Conor McPherson. Wood is Professor and Chair of English at Carson-Newman College in Jefferson City, Tennessee.

Barbara Mackay: When you asked McPherson in 2001 how ideas come to him, he answered, “I just kind of see it….I am attracted to the monologue, which allows the story to breathe…as the character tells it.” Can you describe the role of the monologue in Port Authority?

Gerald C. Wood: Port Authority is a relatively early play for Conor. In still earlier plays, he wanted to tell a thrilling story about people who were trying to justify themselves to the audience. With the monologue, you could see him evolving, getting more complicated. In Port Authority, he doesn’t have a single story and he doesn’t have a single narrator. He has a theme of failed relationships. Although his three characters do touch on each others’ lives here and there, they don’t tell a coherent central story.

I particularly like the way McPherson believes his early works explore the playfulness of theater, its mischievous potential.

Around the time that he wrote Port Authority, Conor experimented with all kinds of forms to let his actors talk directly to the audience. He was very curious about what you could do with the fourth wall. Sometimes he’d break it down, sometimes he’d respect it. The monologue really gave him a chance to do that.

I’d like to quote something McPherson said to you about the monologue: “Irish people are more concerned about the inner life…and the inner response. A monologue gets into what people don’t normally think, which is entertaining and exciting because people don’t normally tell us what they really think…they don’t actually express the more primal thing, which is the voice that is in there.”

After a certain point in his life, Conor told me, “I used to do a lot of monologues. I don’t do them anymore.” But I miss them. Some of them – particularly in Port Authority – are absolutely amazing. To have a character onstage alone just naturally lets you feel the loneliness that is so much a part of Conor’s work. Especially the loneliness of men, and especially of Irish men. You’ve got three different men from three different generations questioning the meaning of life. In his more recent plays, you can see that Conor is more aware of his Irishness, that he is embracing it.

I was struck by McPherson’s straightforward answer to you about his Catholicism: “I think I write a detailed response to singular experiences.”

Many critics put Conor in the tradition of Beckett. I put him in the tradition of Joyce, where he questions the reality of Christian tradition, but at the same time defines it in a more modern, more human way. He’s also saying, “What else do we have?” The Christian tradition gives us redemptive love – that’s a great theme. Or, as Conor would say, “If nothing else, the imagery is compelling.” If you’re not moved by the Pietà, you don’t understand mother love, compassion, the reality of death. In terms of human emotion, Conor finds some of the things that are in the Catholic tradition very useful to understanding the human condition.

In terms of his twenty-first-century characters acting according to moral guidelines, McPherson told you: “I think my characters always tend to find an innate sense of what’s right and wrong, or at least worry about it and usually come back to traditional moral law, which is basically utilitarian: If I don’t treat other people well, I may not get treated well myself. The characters come back to the fear of not being loved.” Were you surprised by that?

Being trained in philosophy at University College Dublin, as Conor was, of course had a hand in allowing religion and reason to play large roles in his plays. I think that it’s absolutely true that Conor uses reason as a way to make sense of the world we live in. I also think there’s a larger issue here, which is a search for order in a world that we cannot understand. Conor would say that reason is instinctive but I think he more and more says: I can’t come up with any idea that’s going to save us from ourselves. Ultimately, we have to embrace mystery.

In your book, you asked McPherson what ideally should happen to his audience during one of his plays and he said, “I think instinctively I just want to entertain them. Also communicate with them.” Does he still feel that?

I think that emotion is, if anything, even stronger. As he started to trust that the audience was on his side, he realized that he could love the audience and they would love him. That’s a statement of confidence, that he now has the audience come to his plays because they get him. He has the opportunity to have more sincere, open, transparent plays, to not play games with the audience. I think that’s part of the way he’s evolving.

I particularly like one quote from your interview, where McPherson said: “…our theatrical grown-up playing has its serious intents. Because we are reflective beings and we like neatness. We want to know what everything means.”

Conor and Beckett both deal with chaos. Beckett says: “Everything is chaos and it all leads to suffering and isn’t that funny?” Conor would say, “Yeah, I understand all that, but in my plays, one of my characters says, ‘I feel alone.’ And another character says, ‘Me too.’ That’s where my plays begin.” 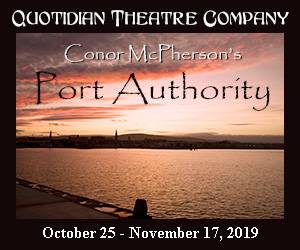