Just in time for the spooky Halloween season, Little Shop of Horrors, the cult-classic sci-fi horror rom-com rock musical by Howard Ashman (book and lyrics) and Alan Menken (music), is back in New York for a limited engagement at Off-Broadway’s Westside Theatre. And if you think that’s a mouthful of a theatrical category description, it’s nothing compared to the mouthfuls of blood and bodies fed on by the infamous talking, singing, and people-eating plant Audrey II! Based on the original low-budget flick of 1960 (directed by the undisputed “King of the B-Movies” and “Pope of Pop Cinema” Roger Corman), the stage adaptation was a huge hit when it debuted in 1982 (and enjoyed a five-year run), as was the feature film remake of 1986 (starring Rick Moranis and Ellen Greene). The present sold-out revival, with Michael Mayer directing an award-winning cast, is sure to cement the show’s already iconic status.

Set in Mushnik’s titular flower shop on New York’s Skid Row, the madcap musical parody of the fright genre tells the tale of the hapless Seymour Krelborn, a poor and geeky florist pining away for his outwardly sexy, inwardly insecure, and obviously battered co-worker Audrey, while nourishing the unusual botanical specimen he named after her. When word of the “strange and interesting plant” spreads, saves the failing business from going under, brings fame and fortune to Seymour and his boss, and offers him the opportunity to rescue Audrey II’s namesake from her brutal boyfriend Orin, will their lives improve, or will they all fall victim to the damaging effects of viciousness, greed, and the increasingly voracious appetite of the flourishing organism?

Retro-camp laughs, faux frights, and a timely (albeit twisted) moral make for a sidesplitting story, loaded with mid-century pop-culture references and set to the girl-group and doo-wop sounds of the era (music supervision, arrangements, and orchestrations by Will Van Dyke). The outlandishly entertaining narrative is advanced and the beat delivered by a hip young trio of Skid Row “Urchins” – Ari Groover as Ronnette, Salome Smith as Crystal, and Joy Woods as Chiffon – who serve as featured singers, backups to the leads, and a Greek chorus of savvy commentators, delighting us with their period-style vocals, harmonies, and moves (choreography by Ellenore Scott) and their street-smart observations and attitudes.

Under Mayer’s well-balanced direction, Jonathan Groff’s portrayal of Seymour (who will be played by Tony Award nominee Gideon Glick from November 5-11), presents a somewhat tame and understated characterization of the protagonist’s nerdy qualities, and Tammy Blanchard’s Audrey is not quite as quirky or ditzy as in other familiar stage and screen interpretations (the bleached blond hair and gum-snapping are absent, though her New York accent is still heavy). The result is a slightly less farcical view of the disadvantaged characters (a vision supported by Tom Broecker’s more restrained costumes and Tommy Kurzman’s hair and makeup design), which is still humorous, but also indicative of their underlying vulnerability and attraction – expressed in her prophetic longing to be “Somewhere That’s Green” and their blockbuster duet on the show’s moving romantic ballad “Suddenly, Seymour.”

The terrific Christian Borle turns in an over-the-top performance as the sadistic substance-snorting and woman-abusing “motorcycle dentist” Orin, striking egomaniacal poses, hatefully bullying Audrey, gleefully torturing Seymour, and eliciting laughter and cheers from the audience upon his hilarious demise and “disappearance” (It’s also fun to spot Borle in the oddball assortment of minor roles that he plays). Rounding out the amusing cast are Tom Alan Robbins as the manipulative and demanding Mr. Mushnik (his brief song-and-dance nods to Fiddler on the Roof number among the show’s many comedic highlights) and Kingsley Leggs as the commanding voice of Audrey II, who turns in powerhouse R&B solos on “Git It” and “Suppertime.”

Amazing puppetry by Monkey Boys Productions (design by Nicholas Mahon, after the original puppet design by Martin P. Robertson), brought to life by a top-notch manipulation team (Eric Wright, Teddy Yudain, Kris Roberts, and Chelsea Turbin), grows the anthropomorphized Venus fly-trap/avocado hybrid from a small and wilting potted plant to a blood-thirsty room-sized monster demanding to be fed. Julian Crouch’s scenic design evokes the rundown look and feel of Skid Row, and colorful lighting by Bradley King adds appropriately surreal touches that augment the bizarre plot, as does the explosive surprise at the end.

Whether you’re a longtime fan of the show or a newbie seeing it for the first time, the current Off-Broadway production of Little Shop of Horrors offers the perfect seasonal choice for a fantastic time at the theater and a welcome return of a ridiculously funny and wildly popular classic. 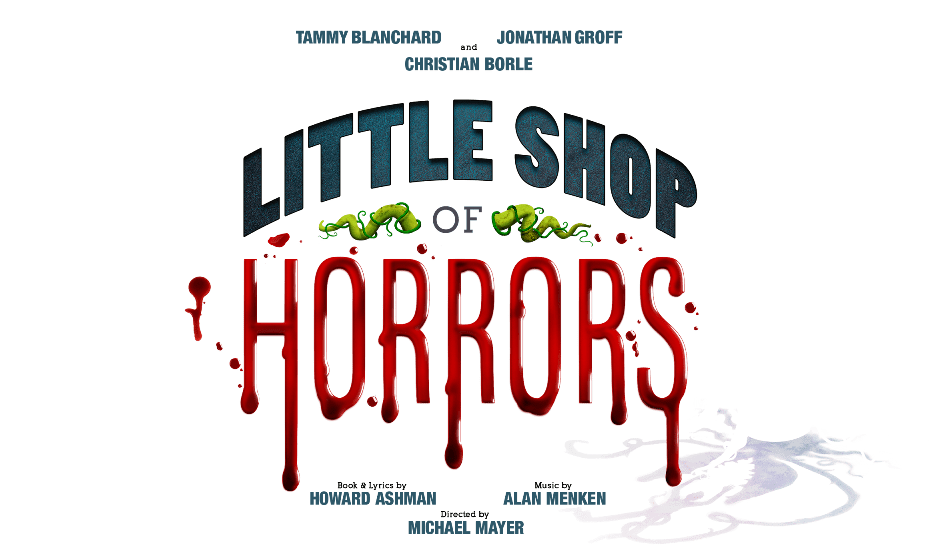