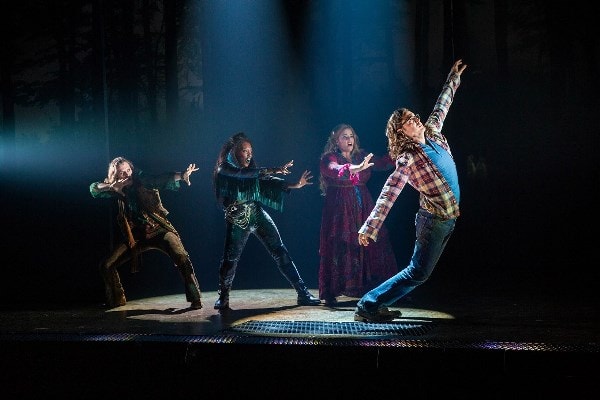 Broadway theaters to dim their lights in honor of Sidney Poitier

If you need proof of the universality of Shakespeare’s themes, Scotland, PA – a whacked-out new musical comedy adapted from the eponymous cult film (original screenplay by Billy Morrissette), based on the tragedy of Macbeth – provides it. Commissioned by Roundabout Theatre Company, the world-premiere production, with book by Michael Mitnick and music and lyrics by Adam Gwon, received a developmental reading at the American Music Theatre Project at Northwestern University in October 2018, prior to its current limited Off-Broadway run at the Laura Pels Theatre. In this altered (and by that I mean “altered-state”) contemporary spin on “that whole Shakespeare thing,” the bloody battle for the crown is transferred from the context of an 11th-century British royal’s blind ambition for the throne to a 1970s under-employed small-town Pennsylvanian’s hunger to live out the American dream as king of a worldwide burger empire, flavored by the ubiquitous taste for fast food and weed. Lots of weed.

Conceived as a mash-up of Macbeth and McDonald’s, the script and score (ranging in style from rock to country-western, romantic ballads, and show tunes, with music direction by Vadim Feichtner and orchestrations by Frank Galgano & Matt Castle) are flowing with references to both the Scottish play and the pop culture of the era that are sometimes spot-on clever, sometimes over-the-top silly, sometimes groan-inducingly obvious, but always ridiculously outrageous and darkly funny. The intrepid cast, directed by Lonny Price with full-out “kick-ass” hilarity, embraces the post-modern parody with no-holds-barred zaniness and an appropriately youthful drugged-out spirit.

Taking the lead are Ryan McCartan as the visionary Mac and Taylor Iman Jones as his determined wife Pat, the most intelligent and ambitious of the employees at Duncan’s burger-joint (double entendre intended), whose love and aspirations for each other and themselves lead the 30-somethings to want a better life than the one they’re living (expressed in Pat’s solo “What We Have”). Their featured vocals are at first tentative, then increasingly strong, as they begin to attain the wealth and power they’re convinced they are due, by any means necessary. As their ill-fated antagonist Duncan, Jeb Brown is the sardonic epitome of a hateful degrading boss, who overworks, underpays, and belittles his staff, pushes, abuses, and refuses to accept his son Malcolm for who he is and what he wants (Will Meyers, nailing the teenage rebellion, resentment, and angst), and gets his deadly comeuppance in the most deliciously apropos way – a suspicious incident investigated by crack homicide detective Peg McDuff (the terrific Megan Lawrence, assuring everyone that “Peg McDuff Is on the Case”).

Channeling Mike Myers and Dana Carvey’s characters Wayne and Garth from the popular skit series “Wayne’s World” on TV’s Saturday Night Live, Jay Armstrong Johnson as Banko – Mac’s loyal and trusting, optimistic but not too bright, best friend – draws big laughs with his clueless comments (the pre-party scene, in which he interviews himself as if he were a guest on a popular talk show, is a howl) and elicits sympathy with his heartless and unexpected demise. Also stealing the show with their bewitching presence, hippie demeanors, powerhouse vocals and harmonies, and a priceless knock-knock joke (the origins of which have been traced back to the drunken porter scene in Macbeth) are Alysha Umphress, Wonu Ogunfowora, and Kaleb Wells as the “Stoners” Jessie, Stacey, and Hector – the recurrent mystical visions in Mac’s hallucinating head who, like Macbeth’s “weird sisters,” foretell his “Destiny” by presciently recognizing that “Everybody’s Hungry” in hilarious segments of song and dance that haunt him (choreography by Josh Rhodes). Rounding out the uproarious cast are Lacretta as Mrs. Lenox and David Rossmer playing the multiple supporting roles of Doug, Andy, and Gary.

The narrative is supported by an evocative set (by Anna Louizos) and lighting (Jeanette Yew) that effectively capture the drabness of a struggling mismanaged business, the brightness of an expanding burger chain, the dark and foggy mist of a dense woods, and the mundane suburban neighborhood off an exit of the PA Turnpike. Costumes (by Tracy Christensen) and hair, wigs, and make-up (J. Jared Janas) recreate the familiar hippie look, restaurant uniforms, and disco style of Saturday Night Fever, and the sound design (Jon Weston) augments the mock-creepy tone.

If you’re up for some irreverent humor, with witty parodies of then and now, and a surprisingly smart comprehension of the essence of Shakespeare’s characters and the universal moral of his tragic tale, Scotland, PA is a lot of bloody druggy satirical fun. 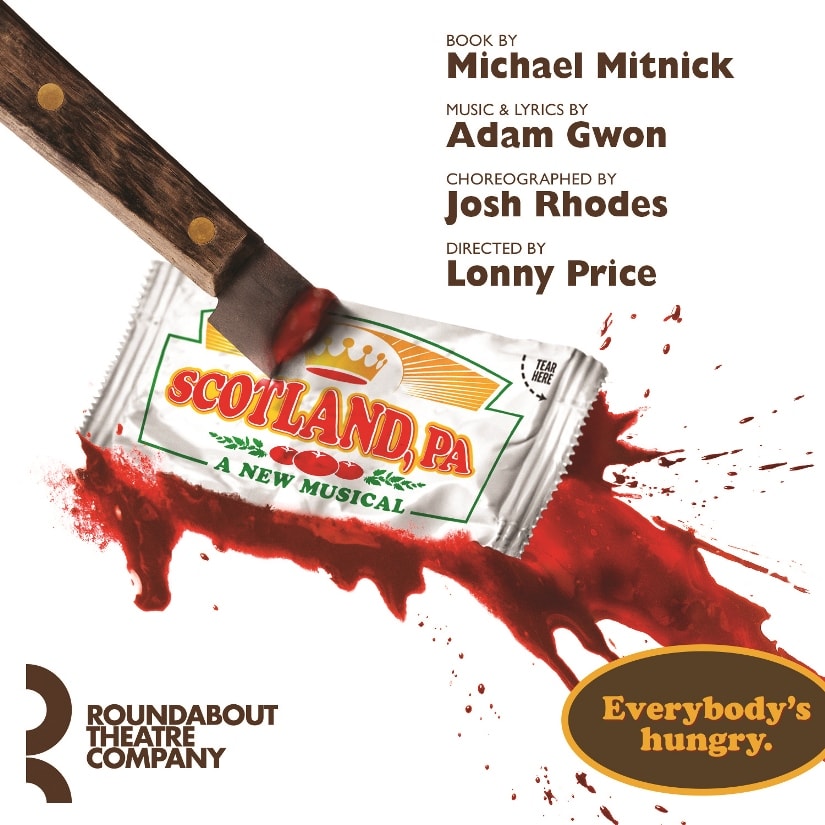