What do you do when your country has taken a wrong turn? With a corrupt government, racist policies, oppression of the marginalized, suppression of the truth and attacks on the media being commonplace these days, it seems like The Colonial Players’ production of The White Rose is speaking to us from a place of prophesy rather than history. Director Alex Brady brings us a chilling, yet inspiring, window into what can happen when people remain complacent in the face of evil—and what can happen when people fight back. 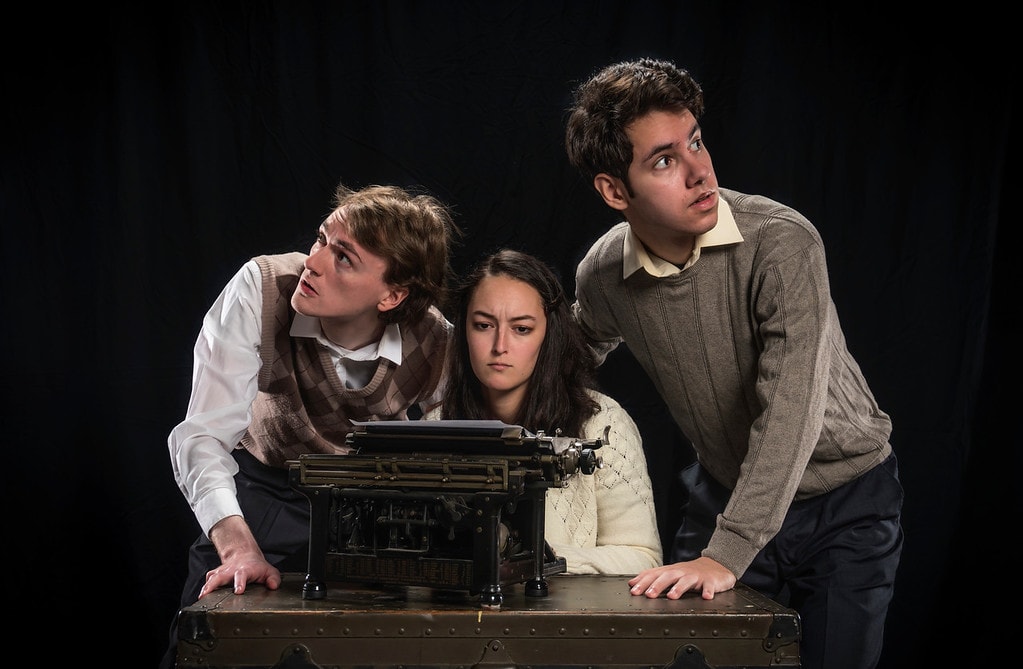 The White Rose, written by Lillian Garrett-Groag, follows a group of University of Munich students as they mount a resistance to the Third Reich through the distribution of pamphlets condemning Hitler. The action of the play revolves around the arrest and trial of Sophie Scholl (Devin Thrasher) and Hans Scholl (Nicholas Martinez), a sister and brother team whose involvement in The White Rose resistance attracts the attention of local Nazi police investigator Robert Mohr (Joe Mariano).

Investigator Robert Mohr is the “everyman” of the play. As a Nazi, he seems somewhat lukewarm towards the cause of the Third Reich. However, it becomes apparent through Mariano’s portrayal of this character that his fear keeps him stuck in the bureaucratic machinations of the government. His own survival is placed at a premium over any sense of honor, desire to protect the vulnerable, belief in God or defense of his country from corruption. While he is not technically a protagonist, Mariano’s Mohr is sympathetic enough to convict the audience and force them to examine what might lead to their own complacency in the face of oppressive regimes.

Devin Thrasher’s Sophie Scholl expresses a purity of heart and intention that grates at Mohr’s conscience. His futile attempts to save her make for some of the best scenes as Thrasher and Mariano are not afraid to engage the emotional depths of their complicated roles. Thrasher shines, especially, in moments where Sophie’s truths are most blatant. While Thrasher exudes a type of feminine delicacy in her portrayal of the young woman, she is skilled enough to allow moments of strength to take precedence. Despite her affinity for roses, Sophie Scholl was no wilting flower.

The other members of The White Rose help us to understand that these people had lives and dreams and desires outside of their repressive circumstances. Martinez is a wonderful Hans Scholl. Though not given as much of a spotlight as the willowy Sophie, his involvement is the catalyst for one of the most important decisions that Sophie makes. The intractable Alexander Schmorell, played by Sam Morton, is a beacon of light and staunch resistance to the Nazis. Christopher Probst (Tyler Heroux), with his photos of his newborn children, reminds us of the fragility of family life in times of war. The devout Wilhelm Graf (Hadlee Walker) reveals the positive aspects of a faith life which calls us to serve something higher than ourselves.

Matt Leyendecker plays the odious Nazi enforcer Anton Mahler. This role acts as a foil to Mariano’s Mahr. Mahler is a straight-laced true believer. Unlike Mahr, whose motives are more rooted in survival, Mahler protects the Reich out of fealty to its goals. Leyendecker convinces us that this faithless man is someone who would do anything to curry favor with the government, even to the detriment of his own soul. In addition to Mahr and Mahler, we have Bauer (Aaron Vonderharr) whose portrayal as a mostly mindless brownshirt proves to be more than it seems by the end of the play. With such a superb cast and relevant story, The White Rose is a must-see this theater season.

Set Designer Alex Brady and Tom Gross did an excellent job of dressing the Nazi offices, as well as using some theatrical magic to show transitions within the space as the plot advances. Lighting Designer Ernie Morton is to be commended for his work in bringing to life various settings, such an apartment during an air raid and an isolated prison cell. Costume Designer Carrie Brady put the finishing touches on the play by recreating Nazi uniforms and the popular fashions of the 1940s. All of these elements come together seamlessly to support this magnificent production.

There is a deeper philosophical question contained in The White Rose which relates to the nature of life and death. It asks us to examine our actions in light of our own mortality. Can death itself be the fulfillment of a life’s purpose? Hans Scholl mentions the idea—commonly attributed to Thomas Aquinas and further explored by Kant—that human beings should never be seen as means, but only as ends. There is a lesson here, I think, for our materialistic culture. The Colonial Players’ production of The White Rose enshrines and uplifts the human spirit, calling us to see our decisions as part of something beyond ourselves. Whether the thing beyond ourselves is truth, freedom, honor or God, we must not regard human beings as replaceable cogs in the wheel of life, but as sacred stories playing out within a universal narrative in which we are all connected.

To have hope means that all is not lost, even in the darkest times. This is the lesson of Sophie Scholl and The White Rose. We must ask ourselves what part we will play. In the words of the recently-canonized Cardinal John Henry Newman, whose writings influenced the real-life members of The White Rose, “Good is never accomplished except at the cost of those who do it, truth never breaks through except through the sacrifice of those who spread it.”

Running Time: Two hours and 45 minutes, including one 20-minute intermission.

The White Rose plays through November 16, 2019, at The Colonial Players—108 East Street, Annapolis, MD. Tickets can be purchased online.