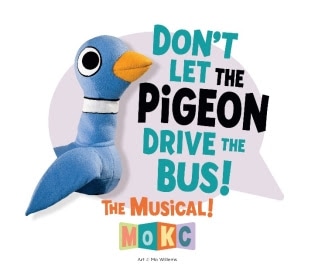 Visitors to the Kennedy Center can also take a tour of the Kennedy Center led by The Pigeon by using the “Tour the Kennedy Center” app, developed by Zappar, a leading global developer of Augmented Reality (AR) experiences and creative tools. In the app, The Pigeon acts as a personal tour guide as visitors explore the campus, scan codes placed on signs at nine points of interest in the 17–acre indoor-outdoor campus, and access interactive trivia.

In addition to Don’t Let the Pigeon Drive the Bus! (The Musical!), highlights of the first year of Willems’s two-year residency include an interactive Jazz Doodle Jam! in partnership with Artistic Director for Jazz Jason Moran, the world premiere orchestral rendition of Goldilocks and the Three Dinosaurs (a Symphonic Spectacular) with music composed by Kennedy Center Artistic Advisor Ben Folds for the National Symphony Orchestra, and this past summer’s Mo Willems & the Storytime All-Stars Present: Don’t Let the Pigeon Do Storytime!, a comedic celebration of reading. Willems also participated in the multidisciplinary 16–day Opening Festival of the REACH, the first expansion of the Kennedy Center in its 48-year history.

This production is most enjoyed by ages 5 and up.