Elizabeth von Arnim’s 1922 novel The Enchanted April, set during the devastating aftermath of World War I and a severe epidemic of the influenza that ravaged England at the time, has been the source of several popular stage and screen versions of the past. Now playing a limited engagement at Theatre Row, a new musical adaptation by Elizabeth Hansen (book and lyrics) and C. Michael Perry (music and lyrics), retitled An Enchanted April, delivers the old-fashioned story in both dialogue and song, in a nostalgic production by Utah Lyric Opera (in association with Thunder Media Group) that evokes the historic style of an operetta (a genre that enjoyed its last hurrah in the 1920s).

The narrative revolves around the transformation of four despondent British women of different ages, backgrounds, and dispositions, who share a month’s lease on a castle in sunny Italy to escape the rain and gloom of post-war London and to remove themselves from the stress of their unfulfilling relationships (as sung in their melancholic refrain “Endless Rain”). Despite the dated stereotypes of women who can’t get along with each other and can only find happiness and contentment when they’re in the good graces of a man, the story leaves us with a feel-good message about the power of love, friendship, gratitude, and communication to change people’s lives for the better.

Under the observant direction of Alice Jankell, the cast delivers the distinct personalities and accents, dry wit and despair of their characters, as well as the hallmarks of the period in their comportment. In the lead (though sometimes tentative with her lines and lyrics) is Leah Hocking, turning in an appropriately dotty and self-deprecating portrayal of the likeable and conciliatory Lotty Wilkins, who is exhausted by her wifely duties to an unappreciative and demeaning husband. She convinces Rose Arbuthnot – a brand new acquaintance at the ladies club, played with a heartrending depth of regret, guilt, and reserve by the outstanding Christiana Cole – to accompany her to Italy for some recuperative rest and relaxation. Both are nervous about telling their husbands of the plan to travel without them, and careful to observe the rules of etiquette during their conversation, keeping their hair up and crossing their ankles, not their legs, as was then proper for ladies to do.

To cover the expenses of the castle, Lotty and Rose place a notice for two other women to join them, which is answered by two completely incompatible strangers who personify the era’s transition from the rigidity of Victorian mores to the discarded inhibitions of the Jazz Age. They are Mrs. Fisher, a puckered and intolerant remnant of the old guard, risibly played with just the right touch of bitterness and disapproval by Alma Cuervo; and Lady Caroline Dester, a modern aristocrat – portrayed by Gena Sims with a haughty chill, condescending attitude of entitlement, and aloof desire to be alone – who doesn’t hesitate to cross her legs, to dress in the latest flapper fashion, or to drink massive amounts of wine and champagne, but is hesitant to accept the proposal of Lord Darlington, with whom she is not in love. But all that begins to change, as they slowly reveal their backstories and the weariness of their lonely existence (which, in this adaptation, receives more emphasis than the historical traumas of war and epidemic), opening up and warming up to one another amidst the “Wisteria and Sunshine” and the renewed prospects of romance.

The featured women are joined on stage by Jim Stanek as Lotty’s laughably demanding, degrading, overbearing, and ambitious husband Mellersh Wilkins; Aaron Phillips as Rose’s husband Frederick, a pseudonymous writer of lurid novels (much to the dismay of his decorous wife), who is dispirited by their emotional distance following a tragic loss that they don’t discuss; and Peter Reid Lambert as Thomas Briggs, proprietor of the castle he inherited from his family, who finds himself attracted to Rose (she, along with her female companions, has metaphorically let her hair down during their Italian respite). All offer illuminating counterpoints to the women, and all, like the women, display a new outlook on life and love in the rejuvenating warmth of springtime Italy. Rounding out the cast and providing comic relief is Melody Meeks Putnam as the maid Francesca, who rails in Italian against the “stupid English” guests and repeatedly annoys them in a running joke with a dinner gong.

As with the operetta tradition, the songs are performed in semi-operatic style, efficiently accompanied on-stage by musicians on piano and synthesizer (music direction by Richard Danley). Again, Cole is a standout with her exquisite tone, expressiveness, and control; her pained duet on “Everything Was Changed” with Phillips, whose rich and resonant voice is the perfect pairing with hers, is the musical highlight of Act I. But the score generally suffers from a sameness of the melodies and a redundancy of the spoken dialogue in the lyrics, resulting in an undue lengthening of the running time – until Act III. Then the mood begins to lighten with the arrival of the men, and the score incorporates the lilting measures of a waltz and the upbeat rhythms of ragtime, with the cheerful “Right as Rain!” – the show’s most memorable number – ebulliently sung by Hocking and Stanek.

The artistic design is smartly historicizing. Period-style costumes and hair by Matthew Solomon identify the ages, status, inclinations, and evolution of the characters. William Armstrong’s set and lighting effectively transition from the dark antiques and rainy skies of London to the bright furnishings and wisteria of the castle and the vibrant daylight of Italy. The fluid scene shifts are supported by Erin Bjorn’s eye-catching projections on a cluster of umbrellas over-hanging the stage that change with the different locales in the journey.

While the score and script could use some tightening and the circumstances of post-war England warrants more attention, An Enchanted April offers an engaging look at the situation of women during a transitional era in the early 20th century, with an uplifting reminder that the joys of life can overcome times of adversity. 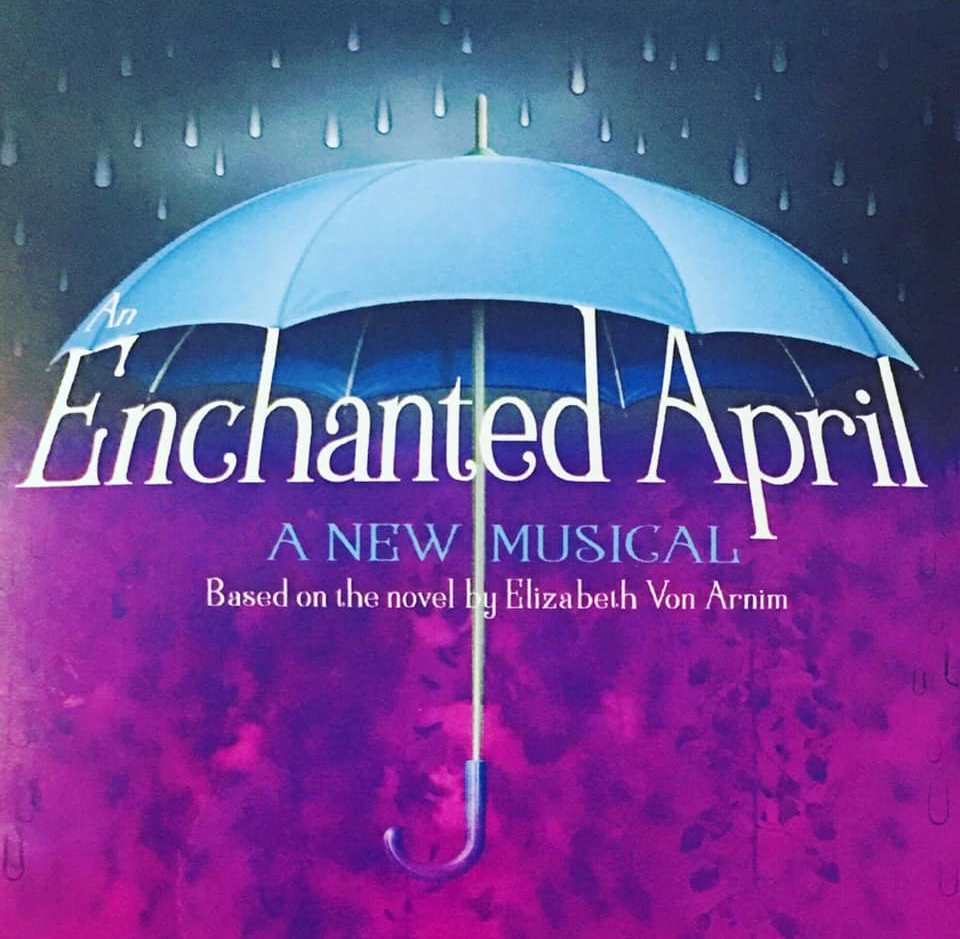