In honor of the Czech dissident, political prisoner, and playwright Václav Havel, Alliance for New Music-Theatre has served up a two-course theatrical repast in DC’s most outré new arts venue, Dupont Underground. A circular tunnel that used to be a subterranean streetcar station, this acoustically unique space is now where ANMT is theater in residence. If you haven’t been down there yet, this would be a good occasion to check it out.

First on the bill of fare is Vaněk Unleashed: An Absurd Musical Fantasy, an original work inspired by Havel and featuring Ferdinand Vaněk, a character Havel created as a wry stand-in for himself. The character Vaněk appears again in the second offering, Protest, which was actually written by Havel. The pièce de résistance of the evening is decidedly Protest.

The two productions, billed jointly as The Havel Project, mark the 30th anniversary of the Velvet Revolution, the bloodless coup led by Havel that began November 17, 1989, in what was then called Czechoslovakia. Commemorating that date and that event—which led to Havel’s election as president—ANMT commissioned the Czech artist Jan Kaláb to create a massive graffiti mural on the wall one walks by on the way to the performance.

No other playwright living or dead has so explicitly and effectively altered political history. For that reason alone, The Havel Project merits attention.

Havel’s two-hander Protest—a powerhouse of a political parable set in a repressive surveillance state—contrasts the courage of a dissident activist (Vaněk) with the accommodationist comfort of a passive sympathizer (Staněk). Because the play when written was banned, it was originally performed undercover in private apartments. What spoke then in a kind of code to audiences living under a totalitarian regime speaks with uncanny clarity to our domestic stakes today, when freedom’s fall to fascism seems no longer inconceivable and real resistance matters. The Alliance for New Music-Theatre production of Protest plays with an urgent edge of contemporary pertinency that is sharp as a knife. Plus its comedic satire is cathartically hilarious.

The play takes place in the home of Staněk (David Millstone), who once lived a politically fringy life but now, having made it big as a television writer, lives comfortably well off, keeps his radical past at a remove, and enjoys gardening and fine brandy. He could easily be pegged a bourgie sell-out except he finds himself in a situation that he knows needs an activist assist. His daughter’s boyfriend, a pop star, has been imprisoned by the authorities. In hopes of mounting a petition campaign to free the young man, Staněk has invited his still-dissident longtime friend Vaněk (Drew Valins) to come for a visit. Vaněk was once himself a political prisoner. Staněk needs his political cred but doesn’t want to take any risk of his own. Vaněk turns the tables and challenges Staněk himself to sign the petition. Will he or won’t he? Dare he or daren’t he? Vaněk’s and Staněk’s disagreement about political tactics drives the drama, and the way Millstone and Valins play out their psychological cat-and-mouse game and contest of principles is electrifying. It’s like Pinter but with purpose.

Under the brisk and witty direction of Artistic Director Susan Galbraith, Millstone leads Valins in seeming to connive, leaning over the parlor table, then crawling under it as if to avoid being surveilled. At another point Millstone takes Valins offstage into darkness down the tunnel as if to give officials the slip.

The playwright has given Staněk most of the lines, and Millstone plays them to the hilt, sometimes shouting them resoundingly into the cavernous tunnel. His performance is fantastically frenetic. Vaněk has far fewer lines, and Valins’s delivery is more deliberate, more quietly certain, less emotionally ostentatious. Clearly the audience Havel wrote for would have known what Vaněk was thinking because they like Havel were like Vaněk, so the character had less need to explain himself. Staněk’s complicit sanctimony and contempt for Vaněk’s moral superiority is where the play becomes a revelation and a truth bomb.

Whereas the tunnel venue’s acoustics serve the actors in Protest dramatically, they seriously compromise enjoyment of the part-spoken, part-sung Vaněk Unleashed, a mélange of American musical, silent screen comedy, and operatic styles. The book by Susan Galbraith (who also directs) is based loosely on Havel’s letters from prison to his wife, Olga. The music is by Maurice Saylor, who with Galbraith co-wrote the lyrics.

Havel is represented (as he was in Protest) by the character Vaněk (appealingly played again by Drew Valins), who is now a political prisoner. His wife is named Eva (Michelle Eugene). The main stage serves as a jail, with movable units of black bars, and a separate platform off stage right is the living room where Eva is at home. There are five supporting characters who come in and out of the action: Blonde Soprano, Prison Secretary, and Revolutionary (Meghan McCall); and Pavel Landovsky and Prison Foreman (Peter Boyer).

Especially when actors were singing operatically with lax diction, it was very difficult to understand what their characters were trying to say. At other times the volume of the prerecorded music overwhelmed comprehension even of speaking voices. The music was very pleasant; the orchestra sounded fine; there were many amusing visual moments such as when strobe lights simulated silent movie flicker and old-timey title slides appeared above the stage; the actors were giving it their all. But because audibility problems made the busily surreal storyline of Vaněk Unleashed impossible to follow (unless perhaps one had the libretto in one’s lap), the performance overall was energetic but vague. 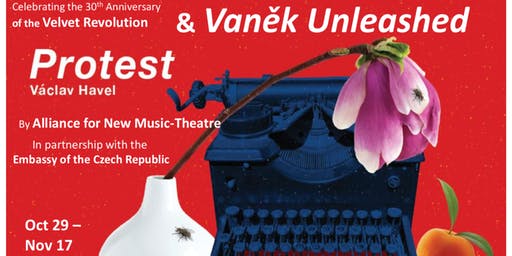 Protest and Vaněk Unleashed play through November 17, 2019, at Alliance for New Music-Theatre performing at Dupont Underground (public entrance is at 1500 19th Street NW, Washington, DC, on north side of Dupont Circle next to Starbucks and across from Dupont Hotel). Tickets may be purchased online.

Note that Dupont Underground is accessible only by a stairway only partially equipped with handrails and has no restrooms, although patrons may use facilities in the lobby of the Dupont Hotel across the street.