At its annual Gala, Shakespeare Theatre Company announced to a surprised audience that the Lansburgh Theatre at 450 7th St. NW would be rechristened as the Michael R. Klein Theatre. In addition to the renaming of the theatre in his honor, announced by Executive Director CHRIS JENNINGS, MICHAEL R. KLEIN was presented with the Sidney Harman Award for Philanthropy in the Arts by ANDREW FLORANCE, Klein’s co-founder and CEO of the CoStar Group. 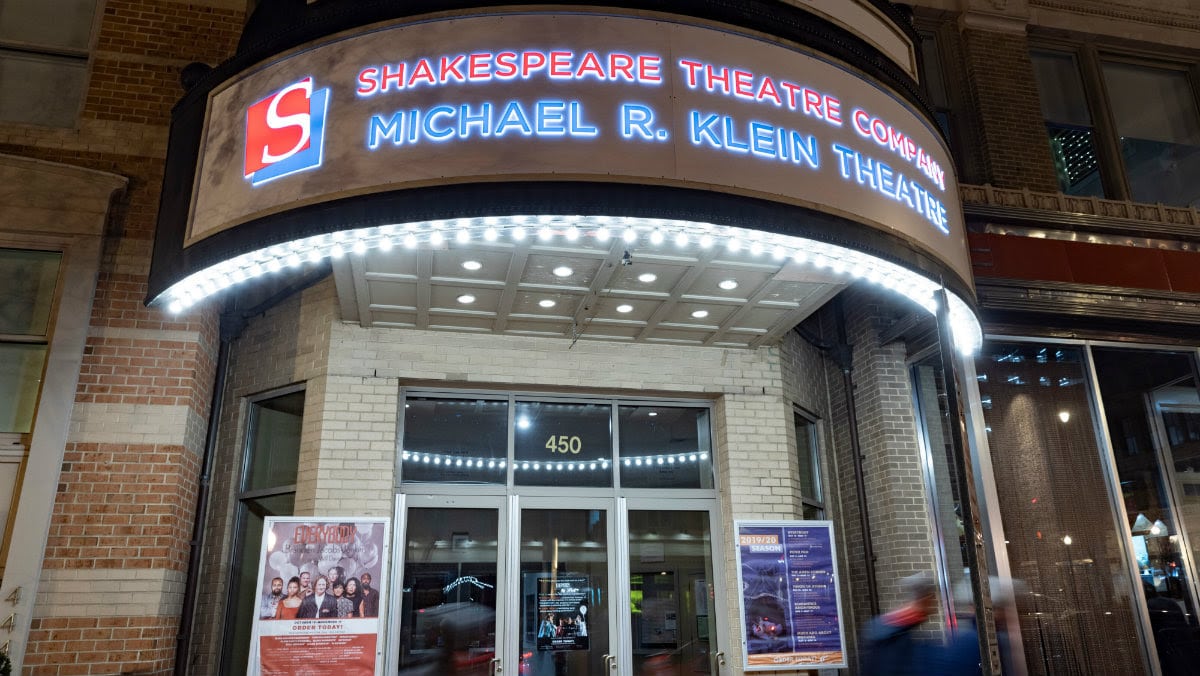 For twelve years, Michael R. Klein has served as the Chairman of the Board of Trustees for the Shakespeare Theatre Company. Klein was initially approached by STC’s former Artistic Director Michael Kahn to bring the Company’s production of A Midsummer Night’s Dream to the Aspen Institute, the two Michaels, both visionary leaders and ambitious thinkers, became fast friends. When Sidney Harman Hall opened in 2007, Klein agreed to serve as the Board Chair. With two theatre spaces operating concurrently, Klein helped with the strategic planning of programming two theatres, using the breadth of his contacts to engage internationally renowned artists and theatre companies, forging the relationships that brought in beloved productions such as King Charles III, The Secret Garden, An Inspector Calls, Waiting for Godot, and 1984, amongst others. Klein, furthermore, reinvigorated the dedication of the Board in providing new resources and support for the success of Shakespeare Theatre Company.

Klein’s company CoStar has been an essential sponsor for D.C.’s most beloved summer theatre event Free For All, a restaging of a mainstage Shakespearean play during the summer with free tickets for all theatergoers. In addition, each year, Klein sponsors one of Shakespeare Theatre Company’s mainstage productions, beginning with Christopher Marlowe’s Tamburlaine, the epic production at the grand opening of Sidney Harman Hall in 2007, all the way up to the first play of the 2019/20 Season, Everybody by D.C.-born playwright Branden Jacobs-Jenkins, under new Artistic Director SIMON GODWIN.

STC is only one part of Mike’s wide-ranging philanthropic projects, which extend as well to education, science, and the environment. In June 2018, after serving several years as its Vice Chairman, Mike was elected Chairman of the Board of Trustees of the Aspen Music Festival and School, the nation’s leading summer program for advanced education of succeeding generations of classical musicians. In the nonprofit world, Mike has been involved in a wide array of organizations, including The American Himalayan Foundation and the NAACP Legal Defense and Education Fund, Inc.

“Mike makes the world a better place for us all,” says Godwin. “I am so pleased that we can honor his transformational contribution to STC in this most fitting of ways.”

“On Opening Nights, I always see Mike,” Jennings offers. “He cares so immensely about our theatre, the plays we produce, and everyone onstage, backstage, and in the audience, and I can see it on his face.” Kahn concurs, “I will never forget the joy Mike expressed when a production fulfilled its ambition.”

“When Michael Kahn announced his retirement, Mike was an integral part of the search selecting Simon to join the company as our new artistic director,” Jennings explains.

“Mike Klein is an outstandingly generous, visionary, and pragmatic Chair. He is, and has always been, the firmest believer in Shakespeare Theatre Company’s mission,” Godwin states. “Renaming the Lansburgh Theatre the Michael R. Klein Theatre is a wonderful way to thank Mike on behalf of everyone at Shakespeare Theatre Company—staff, donors, trustees, patrons, artists, students, and the entire community.”