Making its Off-Broadway debut at the Daryl Roth Theatre, following a developmental presentation by Goodspeed Musicals in August 2018, is The New Group’s production of Cyrano – Erica Schmidt’s musical adaptation of Edmond Rostand’s 1897 masterwork Cyrano de Bergerac, featuring the star power of Game of Thrones’ four-time Emmy Award winner Peter Dinklage in the titular role. While the new self-described “raw and transporting” vision of the original French verse play retains the essence of its classic story of unrequited love and ghostwritten letters, it changes some of the details, adds a score, interpolates current language into the dialogue, eliminates the eponymous character’s infamous nose, and generally lacks his, and Dinklage’s, signature panache.

Schmidt’s current staging gets off to a lively and immersive start, with members of the cast positioned in the audience and their characters reacting from their seats to the opening scene of a play-within-a-play. But under her increasingly slow-paced direction (often to the point of plodding), the well-known tale is interspersed with anachronistic movement-based segments (choreography by Jeff and Rick Kuperman) that are more distracting than enhancing, and only serve to lengthen the drawn-out development of the narrative. Costumes (by Tom Broecker) are eye-catching, but add yet another anachronism to the historically inconsistent adaptation.

The original score, with haunting music by Aaron Dessner and Bryce Dessner, and lyrics by Matt Berninger and Carin Besser (all but Besser are members of the Cincinnati-based indie rock band The National), beautifully synthesizes the group’s alternative style with classical, pop, and show-tune inspiration (Dinklage’s deep voice even recalls that of The National’s lead singer Berninger). And though it contributes to the show’s mostly bittersweet melancholic tone – as does the dark lighting (Jeff Kroiter) and set design (by Christine Jones and Amy Rubin), which, in some scenes, oddly evokes the look of a black-box theater placed on the proscenium stage – none of the songs is particularly memorable as a stand-alone hit that you’ll be singing after you’ve left the theater.

Where the production excels is in Dinklage’s delivery of the poetic eloquence (referenced in a backdrop covered in script), noble ideals, bravery in battle, self-defeating pride, and wry wit of his character (including a distinctly post-modern “Whaaaaaaat?” and a cutting remark about “tall people” that references his height, instead of Cyrano’s nose), in the tradition of a virtuoso play (as Rostand might have written it, to highlight the talents of its lead actor). Other standouts in the cast are Ritchie Coster as the villainous De Guiche, capturing his belated development from an attitude of entitlement and thirst for vengeance to his ultimate respect for Cyrano, and Josh A. Dawson, who brings credibility to his loyal and trusted friend Le Bret.

Both Jasmine Cephas Jones as Roxanne and Blake Jenner as Christian have pleasant tuneful voices, but their characters show no believable chemistry. The ill-fated friendships, longing, and love of the central triangle should drive the story, but here never reach the heights of profound emotion, instead remaining on a superficial level, with no more depth than Roxanne’s initial attraction to Christian’s good looks. Grace McLean, in the role of Roxanne’s chaperone Marie, contributes powerful vocals and adds some touches of humor in her exasperation over her charge’s behavior and her own inordinate love of sweets, but often seems out of step with the show’s pervasive mood of gloom and heartbreak.

The New Group’s present production of Cyrano still has the look and feel of a work-in-progress, with too many disparate elements that haven’t quite gelled. But fans of Peter Dinklage will appreciate seeing his considerable talents live on stage, even in a show that isn’t fully integrated or satisfying. 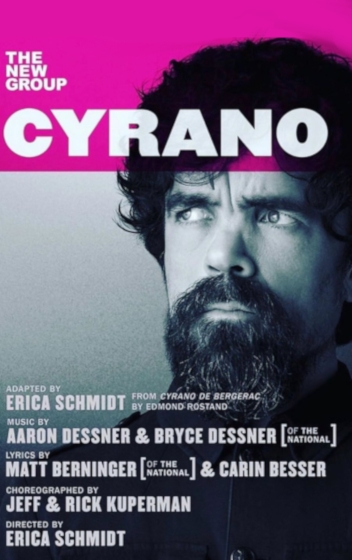