President Jimmy Carter’s farsighted and cautionary “malaise speech” on the disastrous effects of unchecked climate change on the future of our planet, and the concurrent movement to ratify the Equal Rights Amendment, provide the intertwined political themes for Susan Lambert Hatem’s CONFIDENCE (and The Speech), making its New York debut at Theatre Row. Presented by the North Carolina-based Charlotte’s Off-Broadway, following a series of regional developmental readings, the work is a well-intentioned call to action in our current American climate, but one that would be better suited to a history lecture or a political rally than the theater.

Set in the framing device of a 2019 college classroom, the show presents a fictionalized play-within-a-play account of the events surrounding the president’s famous 1979 “Crisis of Confidence” address by history professor Cynthia Cooper and “a curious” male drop-in named Jonathan. He has questions about her insider view from forty years ago, when she served as an intern at the White House and an active proponent of the ERA. So she proposes that they re-create the momentous time, from her own feminist perspective with cross-gender role-playing, in which she portrays the president and Jonathan plays her.

While it’s a nice idea to develop an understanding and empathy for the experience of the opposite sex (which here includes the wearing of pantyhose and running short of feminine hygiene products), the concept lacks clarity. How would the young man know what Cooper did or said at the time? How did the other members of the administration suddenly materialize? Were they the other students in her class? Did they get a script and rehearsal time to stage the re-enactment, or is it all ad libbed? And isn’t this a history class, not a drama class of theater majors? None of this is explained in the production, so the conceit remains utterly illogical.

Nonetheless, the play moves back and forth between the present-day classroom and 1979, with recurrent breaks through the fourth wall, including the lead actors being undressed and re-costumed on stage, direct-address audience participation in asking questions of the president at a press conference, and what Cooper should have said but didn’t say at a time when most women didn’t have a voice. They are supported by period costumes (by Vanessa Leuck) and props (by Deb Gaouette) that identify then (staid business suits and dresses, an old rotary phone) and now (more casual everyday attire and a laptop), and projections (by S. Katy Tucker) that specify dates and locales. There are also behind-the-scenes machinations and disagreements by the team of men in charge of the controversial speech, toxic male belittling of both the young intern and a female student in the professor’s 2019 class, and sardonic hindsight references to the central issues of ecology, equality, and “what makes America great” that are still unsettled today.

Despite its commendable intent of encouraging people, in the words of Jimmy Carter, to “Let your voice be heard” and “to speak up and step forward with confidence,” as spoken by Cooper (and promoted in the show’s printed program, which includes not only the quotations, but links to a list of political causes and organizations), the production, directed by Hannah Ryan, is undermined by a slow pace, long-winded diatribes, superficial characterizations, and no dramatic arc. The staging also suffers from a lack of fluidity in its loud and awkward transitions from the university to the White House and Camp David (set by Brittany Vasta), over-amplified sound design, with noisy crickets and military drumming between scenes (sound by Emma Wilk), and busy staccato breaks in lighting (by Christina Watanabe).

The cast’s performances are uneven, generally marked by a stilted delivery of dialogue that seems more rhetorical and recited than natural. In the lead role of Cooper/Carter is April Armstrong, who, at the press performance I attended, was not yet in command of her lines, though she does make a distinction between the accents and surface demeanors of her two characters. Zach Fifer as Jonathan/Cynthia successfully delivers a sympathetic portrayal of the smart and dedicated but nervous intern, and brings the respectful attitude that Jonathan has for Professor Cooper, and for the honesty, decency, and integrity of President Carter. Among the supporting players, Abigail Ludrof is a standout as Sarah Weddington, capturing the highly professional and profound conviction of the dignified lawyer who, in real life, argued and won the landmark Roe v Wade case and later served as Carter’s assistant, and Sarah Dacey Charles is pleasantly engaging as Rosalynn Carter, his wife and equal partner.

Though the socio-political agenda of CONFIDENCE (and The Speech) is timely and relevant, and its mission to inspire activism and to turn out the vote is admirable, the play too often falls flat in its lack of theatrical drama and polish. And its politically-charged partisan message to New York audiences, which concludes with a screening of President Carter’s actual speech, might just be an exercise in the proverbial “preaching to the choir.” 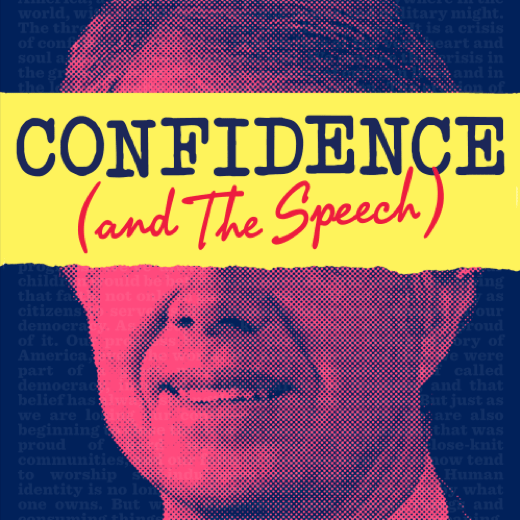