Drawing its inspiration from E.M. Forster’s 1910 masterpiece Howards End, playwright Matthew Lopez re-envisions the story of social conventions and heritage in turn-of-the-century England through the lens of three generations of gay men in 21st-century New York in his two-part Olivier Award-winning epic The Inheritance. Now making its (and Lopez’s) Broadway debut at the Ethel Barrymore Theatre, the meta-theatrical/meta-literary work, directed by Stephen Daldry, revolves around an intergenerational community of gay men, both living and dead, each with a story to tell, experiences to pass on, and a voice to be heard.

The play with music features an original cinematic-style score by composer Paul Englishby that brilliantly enriches the explosive emotional drama and heightens the tone of urgency in its message of the universal human need for love, truth, and an unbroken legacy. Employing the framework of a series of contemporary writers advised and encouraged by the ghost of Forster, the narrative’s complex interweaving of characters and issues, dramatic styles and devices, makes for a rich tapestry of individual lives and perspectives coming together to form a unified story of growing self-awareness within a stalwart gay society that lends the necessary support and inspiration to deal with self-doubt, discrimination, loss, and regret.

An empathetic and entertaining cast of fourteen, many portraying multiple roles, delivers all the heart, humor, pain, joy, and camaraderie in Lopez’s exquisitely poetic language, camp and sardonic wit, graphic descriptions, simulations, and movement-based interpretations of sexual encounters, and distinctive personalities of the array of more than two dozen characters. Transferred from the acclaimed London hit are lead actors Andrew Burnap as Toby Darling, a self-defeating writer whose outward bravado is used to hide the enduring scars of his troubled childhood, and Kyle Soller as Eric Glass, his sensitive, nurturing, and benevolent partner of seven years who is wrongly lacking in self-esteem but finds the inner strength to move forward to honor his philanthropic convictions. Their shifting and increasingly volatile relationship is at the center of the play.

Also from the London production are Paul Hilton, doubling as Morgan, the eloquent specter of Forster, whose work Eric admires above all others but whose inability to come out during his own restrictive era some find troubling, and Walter Poole, a new friend of the older generation who enlightens him on the devastating times at the beginning of the AIDS crisis and the value of compassion in helping those in need; John Benjamin Hickey as Walter’s long-time partner Henry Wilcox, a self-made billionaire, workaholic, and staunch Republican with whom Eric develops a relationship, despite the disfavor of his close circle of friends and Henry’s two sons from a previous straight marriage; and Samuel H. Levine as the look-alikes Adam and Leo, two younger men from different social classes, whom Toby and Eric meet by chance, but who ultimately play a significant part in their evolution as a couple and as exes. Each performance is thoroughly compelling and fully believable in its psychological development and insight into the character.

Rounding out the terrific ensemble and providing excellent support for the main protagonists are a chorus of close friends, family and associates, and the men’s younger selves, played with personality by Jordan Barbour, Jonathan Burke, Darryl Gene Daughtry Jr., Dylan Frederick, Kyle Harris, Carson McCalley, and Arturo Luís Soria, along with by Ryan M. Buggle and Tre Ryder alternating as The Boy. And Lois Smith turns in a scene-stealing appearance in Part Two as the feisty neighbor Margaret, who transforms from an estranged homophobic mother to one whose heartfelt repentance leads her to be an outspoken advocate, champion, and compassionate caregiver to AIDS patients and men who’ve tested positive for HIV.

Through it all, the company engages in third-person narration and first-person contributions to the writer’s story, enacts vivid scenes of physicality and sexuality, offers haunting visions of those who have passed, and presents round-table conversations and expostulations – often talking simultaneously in the heat of the moment – on such important topics as AIDS, the 2018 election, gay history, art and literature, economics and responsibility, and relationships that can be either damaging or fulfilling. The sweeping view of post-modern gay life in America is both passionate and poignant, at times funny, and always penetrating.

Part One is especially gripping and dramatic, with a powerful conclusion that will linger in your heart and mind and evoke memories and pathos, especially for those of us who lived through the height of the AIDS pandemic; it could stand alone as a fully realized play and an unforgettable experience in and of itself. Part Two, though still engaging, takes on a tone of melodrama and sentimentality that doesn’t quite hold up to the intensity of the first. And with a running time of six and a half hours, with multiple intermissions and a pause, the work could use some tightening, especially the extended bits of interpretive expressionist movement that detract from the reality of the themes and lengthen the already long show. But even without edits, it is well worth your investment of time and being there for the duration.

A minimalist set by Bob Crowley, with a platform that raises and lowers and a back curtain that occasionally opens to reveal a different locale, smartly allows us to focus on the words and actions of the characters, without unnecessary distractions (as if reading a book and using your imagination). Costumes, also designed by Crowley, effectively indicate the status and ages of the figures, most of whom are barefoot, with only the wealthiest and oldest wearing shoes (as an indication of the absence of true earthiness in their lives and times). They are augmented by dramatic lighting by Jon Clark and sound by Paul Arditti and Christopher Reid.

The Broadway premiere of The Inheritance is not only ambitious, expansive, and captivating, but also successful in its mission of keeping the gay legacy alive by honoring those who came before and informing future generations. 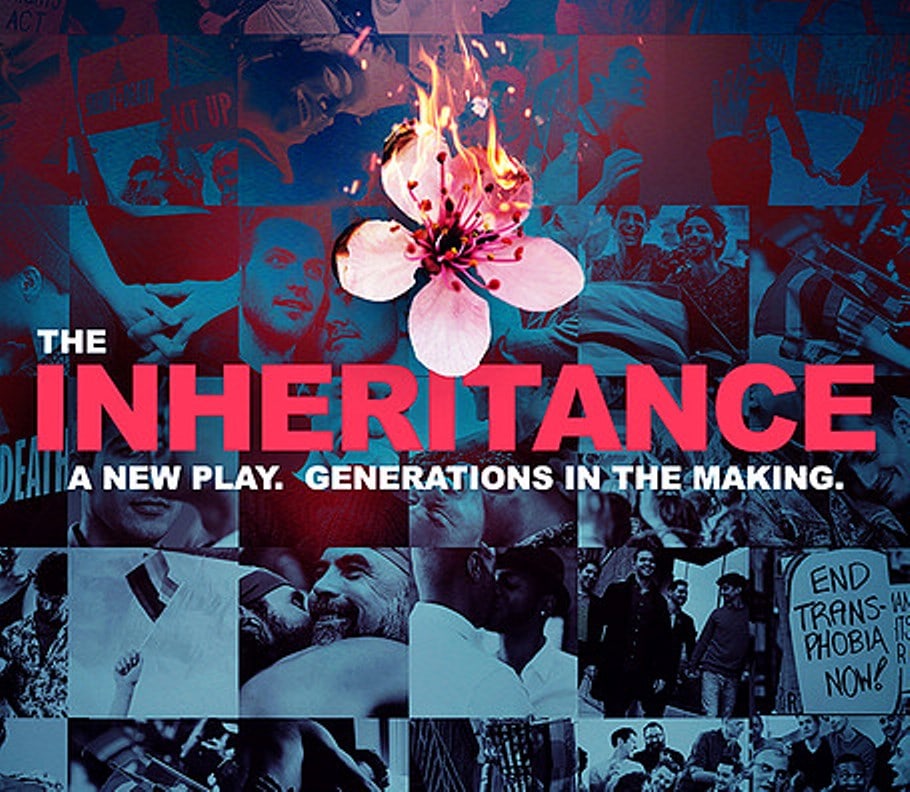