Charles Dickens’ beloved holiday classic of 1843 comes alive like never before in London’s acclaimed Old Vic production of A Christmas Carol, now on Broadway for a strictly limited eight-week engagement at the Lyceum Theatre. Envisioned by the imaginative mind of Jack Thorne (who also brought us the magic of Harry Potter and the Cursed Child), the new adaptation of the timeless tale transports us to the Victorian world of Ebenezer Scrooge and fills us with the true spirit of Christmas, as we not only witness, but also partake in, the uplifting transformation from his old ill-tempered miserly ways to a renewed life of compassion, generosity, and joy that is guaranteed to captivate and delight all ages.

From the moment we enter the theater, the inspired production, directed by Matthew Warchus, engulfs us in a sea of old-fashioned glowing lanterns that covers the ceiling, hangs high above the minimal set, and encircles the house (scenic design by Rob Howell). Villagers in period-style costumes (also by Howell) offer cookies and clementines to everyone as they stroll through the aisles and greet us. A quartet of live musicians, also clothed in 19th-century attire and top hats, and playing traditional holiday music, is soon joined by the full company singing and dancing (movement by Lizzi Gee), ringing Christmas bells, and encouraging the audience to clap along. A communal mood of jubilation permeates the theater and puts a smile on the face of even the ‘scroogiest’ among us, before the familiar tale of redemption has even begun.

Once it does, the well-known narrative is presented through alternating segments of storytelling and enactment by an enthralling cast that also performs a score of original music (by Christopher Nightingale) and a dozen popular Christmas carols, including such favorites as “God Rest Ye Merry Gentlemen,” “I Saw Three Ships,” “O Holy Night,” and “Joy to the World” (music direction by Michael Gacetta). Haunting sound (by Simon Baker), eerie lighting (Hugh Vanstone), and mysterious fog effects in the darkness heighten the drama of ghostly apparitions and ominous prognostications, and a host of surprises, from the balcony to upstage, down the aisles, overhead, and all around, keeps the audience fully involved as the story unfolds. Everything about this unique staging is designed to pull the viewer in and to hold us in rapt attention, and so it does.

Leading the mesmerizing cast is Campbell Scott in a star performance as Ebenezer Scrooge. Thorne takes liberties with some of the details of Dickens’ original text, to flesh out the background of the character and to explain the motivations for his parsimonious, misanthropic, and workaholic behavior, which Scott delivers with insight and conviction. From his iconic “Bah, humbug” and stubborn refusal to learn the lessons from the Ghosts of Christmas Past and Present – played respectively by the terrific Andrea Martin and LaChanze, who put a new spin on the specters of time, with distinctive accents and welcome touches of humor sprinkled into their dire warnings – to the eye-opening glimpses of his future and giddy awakening to the pleasures of life and the value of kindness, Scott fully embraces and masterfully develops the lonely protagonist through his cathartic journey.

A fine supporting cast contributes well to the story and songs, and to Dickens’ ever-relevant message. Especially memorable portrayals are turned in by Chris Hoch in the dual roles of Scrooge’s abusive father and the admonitory ghost of his partner Jacob Marley; Evan Harrington as his pleasant and supportive boss Fezziweg; and Sarah Hunt as Fezziweg’s daughter Belle, the forgiving woman Ebenezer loved and then lost as a result of his misguided ambition.

Also of key significance to the plot and an irresistible favorite of the audience is the character of Tiny Tim, the adorable son of his overworked clerk Bob Cratchit. Though crippled from birth, the boy remains loving, optimistic, and happy, and provides the impetus for Scrooge’s metamorphosis into a kinder man. Here the role is played (on alternate dates) by Sebastian Ortiz and Jai Ram Srinivasan, two young talents with cerebral palsy, who underscore the heartwarming moral of being caring and sympathetic to the challenges faced by others.

The Old Vic’s reimagining of A Christmas Carol is the sweetest of holiday treats for the whole family, with compelling performances, rich music, and an ingenious staging that renders the time-honored period piece immediate and inclusive. I didn’t want it to end, and I’m still smiling from the experience. Heed my advice and be sure to see it, before it becomes a ghost of Christmas past!

Running Time: Approximately one hour and 55 minutes, including an intermission. 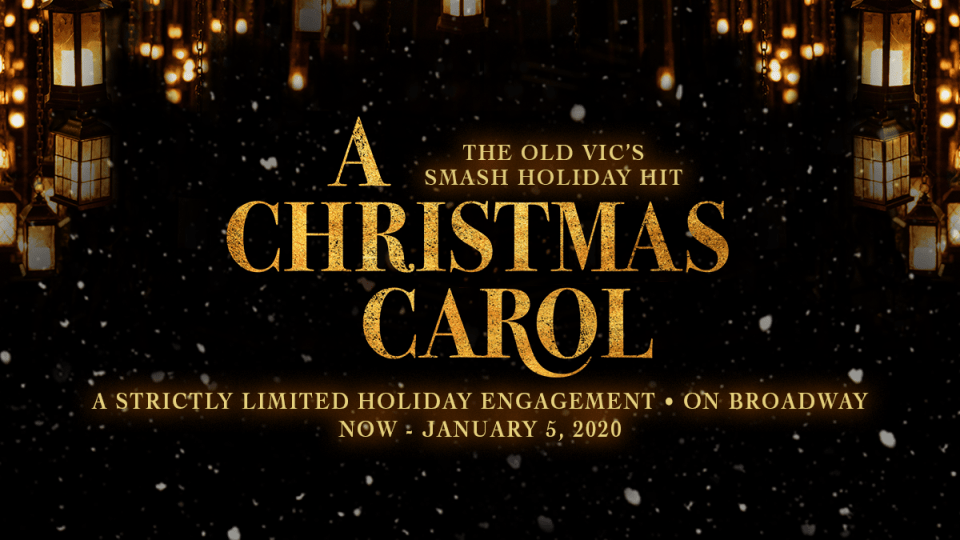