Although Lauren Gunderson has been twice recognized as our country’s most produced playwright, none of her celebrated works has made its world premiere in New York until now, with The Half-Life of Marie Curie. The new two-hander, commissioned by Audible through its Emerging Playwrights Fund to debut Off-Broadway in a limited engagement at the Minetta Lane Theatre (the company’s home venue), recounts the fictionalized history of the friendship between two pioneering women scientists of the early 20th century, Marie Curie and Hertha Ayrton, who spent a pivotal summer together in 1912.

Curie has just won her second Nobel Prize, but instead of being universally lauded for her contributions and genius, she is excluded from attending the awards ceremony because of her gender, and under attack for having an affair with a married man (though she has been widowed since 1906, and he is separated from his wife). Subsisting in a state of deteriorating health and despair in Paris, she is visited by her dear friend Ayrton, a British engineer, physicist, and suffragist, who invites Curie to stay at her seaside house in England for a much needed respite. There they discuss everything from their relationships and families to the arts, their work and careers, and the endemic discrimination against them as women in a male-dominated field and society, while giving each other the strength and support to persevere.

Written with insight, passion, and humor, Gunderson’s masterful script is richly directed by Gaye Taylor Upchurch and brilliantly brought to life by the formidable talents of Kate Mulgrew as the feisty feminist Ayrton and Francesca Faridany as the emotionally and physically pained Curie. Their distinctive accents (with spot-on dialect coaching by Kate Wilson), contrasting personalities, and profound camaraderie are palpable in the stars’ tour-de-force performances, which effectively alternate between segments of direct-address monologues and enactments of their conversations, in which they introduce themselves and their achievements, lament the treatment of women, battle over the dangerous effects of radiation, and cement their bond over whiskey and shared experiences.

Whereas Faridany’s Curie is frail and disheartened, Mulgrew’s outspoken and fiery Ayrton gives her the courage to carry on, which they both do, beyond that momentous summer and through their selfless contributions to the allied forces in World War I, as they remind us in their closing recollections. The show is well researched and vividly imagined, in its entertaining and informative examination of two extraordinary women who advanced the course of science and the struggle for equal rights and recognition.

On a par with the superb writing, direction, and acting is the production’s top-notch artistic design. Period-style costumes (by Sarah Laux), hair and wigs (by Charles G. LaPointe), and furnishings (scenic design by Rachel Hauck) evoke the era of the early 20th century and easily transition from Paris to England with the removal of a few pieces of fabric. A floor-to-ceiling backdrop of mullioned-and-transomed windows lets in the beautiful hues of the changing light (by Amith Chandrashaker), which goes dark to focus on the women’s spotlit downstage commentaries. And an evocative sound design (Darron L West) transports us from the angry crowds outside Curie’s home in Paris to the gentle waves of the English coast, captures the hissing noises of light bulbs before Ayrton’s corrective solution and the crackling radioactivity (a word invented by Curie) of the radium she discovered, and soothes with the dulcet tones of her daughter’s accomplished piano playing that comes from an adjoining room.

With its engaging biographical narrative and timely historical message, The Half-Life of Marie Curie will surely cement Gunderson’s reputation as the number one produced playwright in the US. And the stellar acting, direction, and design of Minetta Lane’s outstanding premiere definitely make it a must-see show in New York. For those who can’t get to the theater before it closes, a recording of the show, with the original cast, will also be available to listeners everywhere in Audible’s growing series of audio-plays. 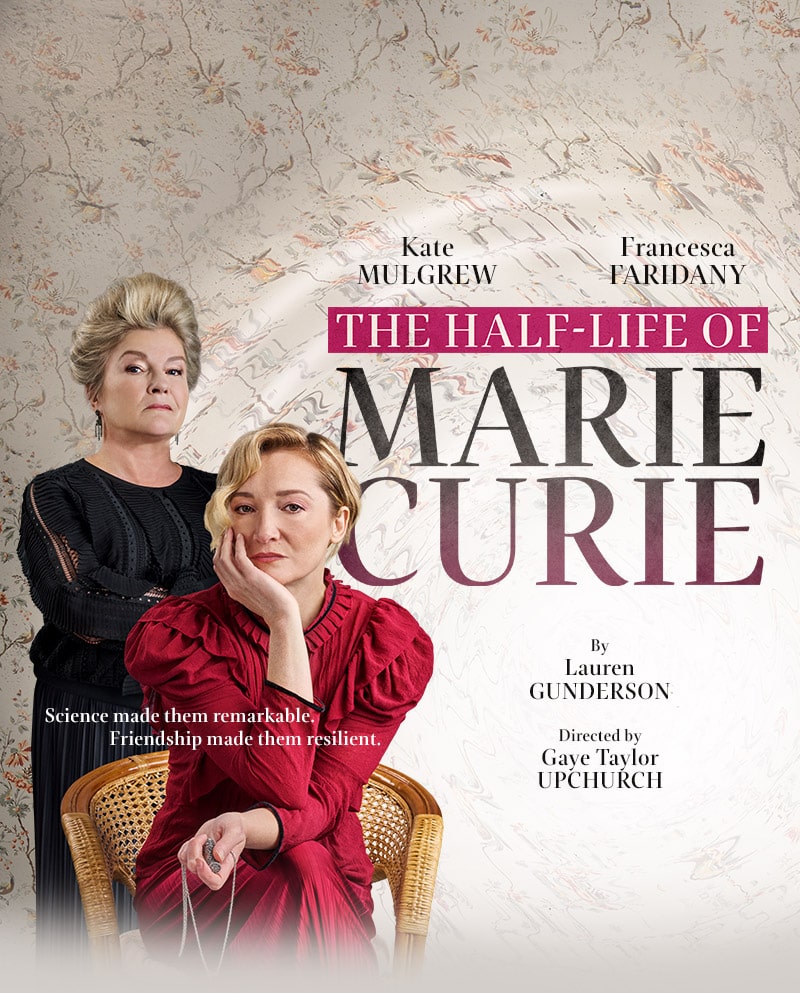