Aquila Theatre’s adaptation of Homer’s Greek epic The Odyssey, translated by Emily Wilson and directed by Desiree Sanchez, provides a sobering picture of the impact of warfare on the psyche. It’s interesting that we don’t really consider The Odyssey to be a narrative about trauma. Having seen the threads which Aquila Theatre has pulled from this classic adventure tale in this adaptation, I now believe this is an oversight.

The play opens with a poem by Amorak Huey, “We were all Odysseus in Those Days”, which provides a clever framing device: the poem’s Narrator (Michael Catlege) is a veteran who returns home from war to teach literature. He never speaks about his experiences during the war, but sublimates this trauma into his lessons about The Odyssey. This take is drawn from Aquila Theatre’s work with the veterans in The Warrior Chorus program. The Director’s Note mentions that The Warrior Chorus is a program intended to “train members of the veteran community in leading discussion groups based around ancient Greek works.” It seems like this relationship has been very fruitful, as this work is one of the most emotionally jarring productions I’ve seen relating to trauma experienced by veterans.

Six actors play all of the roles. All but one of them play multiple roles. The interesting thing about this play is that the actors don’t necessarily embody fleshed-out people, but rather the archetypes that we are familiar with in Greek literature. This provides a surface view which enhances rather than detracts from the subject matter. The play itself seems designed for audience members—specifically veterans and their loved ones—to project their experiences on and to see those experiences reflected back.

Cameron Robertson is Odysseus. Most of the production is involved with him recounting various experiences involving violence done to him or violence he has enacted upon others. His wife Penelope (Joanna Bending) floats around the sparse set like a ghost, mourning her husband’s twenty year absence. Tora Alexander, in one of her three roles, is a worried Athena trying to protect the family she is the patroness of. Daniel Cassidy, who has four parts, plays Telemachus—he is every bit the aimless young person whose absent father haunts his psyche and has him fleeing wildly from one task to the next in order to find himself.

This production also features songs and brief musical accompaniment. This can be somewhat distracting when played against dialogue. However, Reece Richardson as Demodocus provides the show with one of its highlights when singing a song about the experience of a Vietnam veteran, then singing about the Trojan Horse. This was one of those moments where the depth of this production really shines. The audience is left to sort through whether the experience of warfare is comparable to the Trojan Horse in that it rolls in quietly but triggers a thousand surprise sufferings in the participants.

The set—designed by Director Desiree Sanchez—is purposefully limited. With a netted sail, a table, chair and a couple of other small props, it looks more like a MoMA exhibit piece or something you would see in a Dwell spread. The colors used are largely neutral: black, white, beige, gray. The set, like the characters, provides even more of a canvas for the audience to project their experiences upon it.

Costume Designer Lauren Gaston also follows the abstract, postmodern trend. Most characters wear sand-colored combat boots, some variety of stripped-down military fatigues and leather biker vests sporting a Trojan helmet emblem with the word “VETERAN” beneath. Lighting Designer Steve Mackie, Technical Director Bryan Marks and Sound Engineer Lucas Cardwell are also to be commended for their creative work during the combat scenes on the Island of Cyclopes. The combinations of light and sound evoke warfare, but in a way which is incredibly sensitive to the fact the veterans who are struggling with trauma may be present at the show. As with most the design elements, this helps tie the show together as a production which is uplifts the narrative and experiences of veterans over any one particular story.

So much of Aquila Theatre’s The Odyssey is felt rather than observed. The significant strengths of the production make this a must-see for veterans and their families, with the caveat that some recovery time may be needed after due to the emotional rawness of the content. Aquila’s clever way of channeling Greek myth into a modern and relevant narrative will give anyone something to think about. If they’ve managed to apply this ancient narrative to our times, what else might we be missing in classic literature? It’s a good thing that companies like Aquila Theatre are encouraging us to dig deeper through the amplification of often-unheard voices.

Running Time: 95 minutes with no intermission. 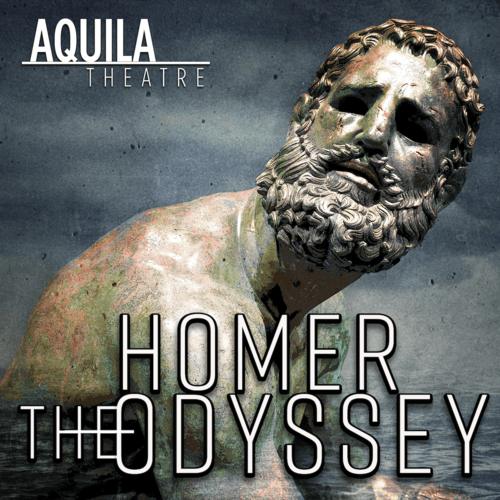