Making its Off-Broadway debut with The York Theatre Company as part of its 50th anniversary season, the new musical revue Anything Can Happen in the Theater: The Musical World of Maury Yeston, conceived and directed by Gerard Alessandrini, pays homage to the eponymous Tony Award-winning composer and lyricist with a selection of staged numbers from his rich theatrical songbook. The set list comprises 23 samplings from his Broadway hits Nine, Grand Hotel, and Titanic, Off-Broadway, regional, and international productions, as well as some independent songs not previously heard, for a performance that captures the breadth of styles and moods in his melodious repertoire.

An upbeat opening segment sets the stage for the theatrical concert, as the singers arrive from the wings and the aisles, in character, and confirm the titular message that “Anything Can Happen in the Theater” and that, despite the stress and uncertainty of auditions, “you do it for the work” you love. The delightful cast of five continues to bring personality to the fast-paced sung-through performance, transitioning from one song to the next without the need for introductions or dialogue (the songs’ titles and shows are provided in the program), relying, under the persuasive direction of Alessandrini, on their eloquent voices, expressive faces, and emotive body language, and the lively choreography of Gerry McIntyre, to impart the themes and feelings inherent in Yeston’s music and lyrics.

Accompanied by Music Director Greg Jarrett on piano, the talented vocalists – Benjamin Eakeley, Jovan E’Sean, Alex Getlin, Justin Keyes, and Mamie Parris – impress with their well-suited solos and well-matched harmonies. From romantic ballads to vibrant show tunes and comical parodies, they never fail to get to the humor and the heart of the songs, be they saucy and flirtatious (Parris’s “Shimmy Like They Do in Paree” and “Call from the Vatican” and Eakeley’s “Only with You”), silly and cynical (Parris and Getlin griping about “No Women in the Bible”), or earnest and heartfelt (Eakeley’s touching solo on “New Words,” the simpatico duet by E’Sean and Keyes on “You’re There Too,” and Getlin’s rich and resonant vibrato in her profoundly moving renditions of “Danglin’” and Strange,” which number among the highlights of the show).

Other memorable moments include the high-spirited group performances of “Feet,” with ebullient nods to tap dancing and the chorus line; the cookin’ “Salt n’ Pepper,” featuring a hilarious Keyes on lead vocal; the ragtime stylings of “The Mardi Gras Ball;” the fun-loving blockbuster “Cinema Italiano;” and the witty “I Don’t Want to Rock ‘n’ Roll,” in which E’Sean, Getlin, and Keyes, in Baroque-style attire, laud their love of classical composers, but sing and move to a mid-century rock beat. The harmonies are terrific, the energy is off the charts, and the enthusiasm is contagious.

A minimal but meaningful artistic design enhances the themes and feelings of the diverse collection of songs and the enjoyable homage to their creator. James Morgan’s attractive set features downstage walls papered with images of Yeston’s musical scores and manuscripts and a series of receding round-headed arches that recalls the iconic stage of Radio City Music Hall. Vivid lighting by Jacob Zedek creates a rainbow of hues on the steps at both sides of the central grand piano and a backdrop of changing colors that are matched to the numbers’ shifting moods. And Melinda Hare’s costumes are smart, simple, and eye-catching, and also lend effective visual support to the musical stories and characters in Yeston’s narrative compositions.

The entertaining songs and staged performances in Anything Can Happen in the Theater: The Musical World of Maury Yeston make for an engaging evening that flies by quickly and leaves you wanting more. If you’re not already a fan of Yeston’s work, this high-spirited revue will surely make you one; it will also whet your appetite for experiencing the numbers in the greater context of the shows they represent. 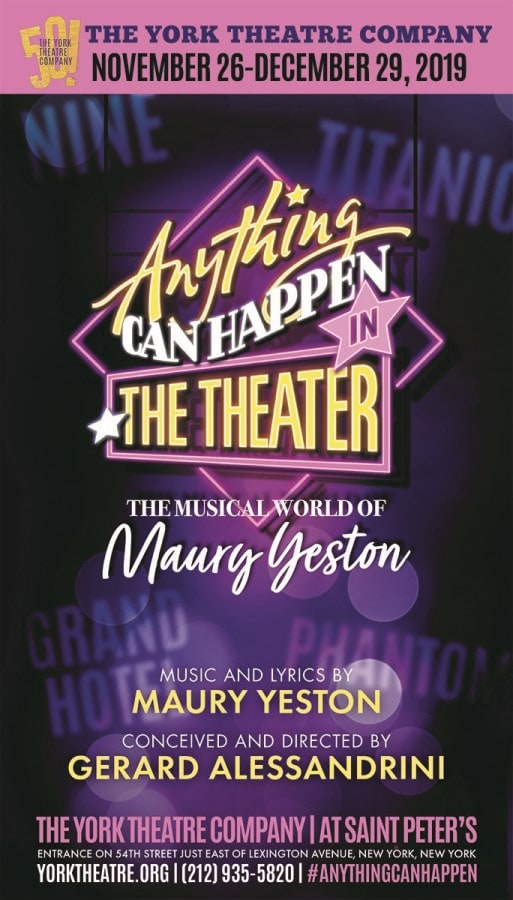 Anything Can Happen in the Theater: The Musical World of Maury Yeston plays through Sunday, December 29, 2019, at The York Theatre Company (in the lower level of Saint Peter’s Church) – 619 Lexington Avenue, New York City. For tickets, call (212) 935-5820, or purchase them online.