Oh, that pigeon! Always causing trouble. He never wants to take a bath. He stays up past his bedtime. And now he wants to drive… a bus?!

Children’s author Mo Willems continues his tenure as inaugural Education Artist-in-Residence at the Kennedy Center this month with the world premiere musical adaptation of his book Don’t Let the Pigeon Drive the Bus! 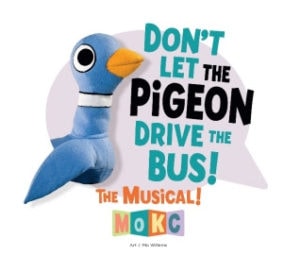 Judging from the brisk ticket sales, this is one bus ride people are eager to take.

Willems, a New York Times bestselling author who earned six Emmy Awards as a writer and animator for Sesame Street, is a staple in many a child’s book collection. In addition to a series of books featuring the Pigeon, Willems is the author of the Knuffle Bunny books and the Elephant and Piggie series for early readers.

Don’t Let the Pigeon Drive the Bus: The Musical! centers on the rather naughty pigeon who thinks he should be able to do just as he pleases.

The cast of Pigeon is a veritable who’s who of DC talent led by Helen Hayes Award-nominee Christopher Michael Richardson (The Wiz, Ford’s Theatre) as the Pigeon and Helen Hayes Award-winner Felicia Curry (Sheila & Co, Factory 449) as the Bus Driver. Here is what Richardson and Curry have to say about this kid-tastic production.

What character do you play in this show?
Felicia: The Bus Driving Bus Driver!
Christopher: I play The Pigeon!

What made you want to be a part of this project?
Felicia: The chance to bring Pigeon to life and the chance to work with this incredible team.
Christopher: I’ve loved Mo and Debbie’s (composer Deborah Wicks La Puma) work ever since I played Elephant Gerald on the second National tour of Elephant and Piggie’s We Are In a Play. Their shows really allow you to go on a journey with these characters, and when I heard that they were working on a new show starring The Pigeon, I knew I wanted in!

What’s the best part about working with Mo Willems?
Felicia: He is the most fun. A true collaborator.
Christopher: Mo is so open to collaboration. It’s rare that you work with such well-established characters and get a chance to put your own spin on them, but Mo really champions that. He champions what everyone brings into the room.

What’s it like to adapt an iconic character from a book into a musical?
Felicia: You just hope you live up to the expectations (though I think as soon as they see my Bus Driver they know she is a little different from the one in the book).
Christopher: To be honest it’s been a little scary! The Pigeon is such a bold character, and I’ve been trying to do justice to his sassy brassy spirit. It helps that most of us have collaborated on projects before, so we aren’t trying to make it happen alone. There’s an entire team helping us and making sure that we’re living in Mo’s world.

What is the secret to performing for young audiences?
Felicia: To not treat them like a young audience. Tell the story as honestly as possible. They are eager to hear it, especially this one. They love the Pigeon.
Christopher: Joy! A lot of our audience members will experience theatre for the very first time with this show, and their joy is contagious. Once that’s in the room, the rest of it becomes easy.

Are you aware that this cast is an intimidating group of DC superstar performers? (Hasani Allen, Evan Casey, Tracey Lynn Olivera, and Erika Rose round out the cast.)
Felicia: You better believe it! I’m just trying to figure out how I convinced them to include me. So honored to be working with this group of superstar friends.
Christopher: You’re telling me!! It’s been a dream to be surrounded by such an amazingly talented and supportive cast. I wouldn’t be able to do this without them and the love that they bring to our show every. single. day.

What’s your favorite kid-tastic special effect in the show? (I’ve heard about feathers, puppets, etc.)
Felicia: My favorite effect is one Mo wrote into the show. And without giving too much away, it’s the magic of the life of the bus.
Christopher: I have to say the doors are my favorite. You never know when someone will pop in or some fun prop will burst out. It really adds to the show.

Ok, last question. Why shouldn’t we let the pigeon drive the bus?
Felicia: Because he doesn’t have a Bus Driver’s license and he didn’t attend Bus University School!
Christopher: Well. To be quite honest. There really is no good reason! Where there’s a will, there’s a way!