High-voltage energy, powerhouse vocals, acerbic humor, and a dynamic design come together to express the urgency of youth and the raw emotions of dealing with social, political, and familial dysfunction in the Broadway premiere of Jagged Little Pill at the Broadhurst Theatre. Inspired by singer-songwriter Alanis Morissette’s eponymous Grammy Award-winning alt-rock concept album of 1995 (one of the best-selling of all time, with more than 33 million copies sold worldwide), the new jukebox musical, with an original book by Oscar-winner Diablo Cody, lyrics by Morissette, and music by Morissette and Glen Ballard, passionately delivers the sensory overload that comes with coming of age and attaining female empowerment in our troubled post-modern culture.

That is, undeniably, a lot to pack into two acts and an inordinate amount of trauma to strike one mother, daughter, father, and son, and that’s exactly the point. There is a lot to deal with in present-day life, so under Tony-winner Diane Paulus’s ardent direction and Sidi Larbi Cherkaoui’s fervid choreography, the pace is frenetic, the intensity is high, and the message, as conveyed by Morissette’s rock anthems and Cody’s operatic suburban archetypes, is crucial: see, feel, act, change, heal, listen, and learn, don’t just sit back, internalize your pain, and maintain the status quo.

A fully committed lead cast and a terrific young ensemble, many making their impressive Broadway debuts, bring full-out vitality and significance to the characters and their struggles, laugh-out-loud impudence to their confrontational quips, powerful voices to their songs, and unbridled expressiveness to their explosive moves. It is an across-the-board triumph in casting and performance, in a female-centric show that also shows some positive growth and understanding on the part of the two male members of the family.

Elizabeth Stanley is increasingly agonized as the competitive perfectionist mother Mary Jane Healy, who, on the surface, seems happy and fulfilled, but has suppressed a harrowing assault from her past, is growing ever distant from her workaholic husband Steve, with whom she shares a sexless marriage, and manages her pain with pills, both legal and not (though two movement-based segments, of Mary Jane walking backwards in time and battling with her inner self on a sofa, seem too self-consciously trendy, even in a show that’s so intentionally expressionist). As the couple’s adopted daughter Frankie, Celia Rose Gooding embraces all of the growing pains of a rebellious teenage outsider who isn’t fully accepted at home or at school – a bisexual African-American budding activist and writer (in one of the show’s funniest self-referencing scenes, she presents “Ironic” to her high-school writing class, and is criticized for its titular malapropism, as was Morissette at the time of the song’s release), exploring her sexuality, trying to change society for the better, clashing with her parents, and not wanting to fit in, but owning who she is and what makes her different.

Both Sean Allen Krill as the Healy dad and husband Steve and Derek Klena as the over-achieving son Nick (accepted at Harvard and, according to his proud mother, “the only thing I’ve done correctly”), capture the stress and frustration of their characters, who come to recognize their mistakes, own up to them, and ultimately do the right thing (it is a musical after all, so a happy ending is to be expected). And Kathryn Gallagher and Logan Hart as the high-school students and party-goers Bella and Andrew epitomize the toxic culture of misogyny, date rape, and victim-blaming, as she transitions from fun-loving to devastated and he remains entitled, privileged, and remorseless (though we can still hope for at least a semi-happy ending, when he goes to trial).

Rounding out the featured cast are Antonio Cipriano as Frankie’s sweet new non-committal love interest Phoenix (who, along with Steve and Mary Jane, perform an affecting rendition of “Head Over Feet”) and Lauren Patten as her forsaken girlfriend Jo. She turns in an outstanding performance, as well as the production’s show-stopping blockbuster vocal on “You Oughta Know,” which garnered a well-deserved standing ovation on the night I attended (and likely does every time she sings it).

The show’s youthful tone is supported by a vibrant artistic design. Sliding upstage platforms move the live band (under the rousing music direction of Bryan Perri) in and out of view from both wings, quick spinning gabled panels (set by Riccardo Hernández) with changing video projections (design by Lucy Mackinnon) identify the shifting locales, and aggressive colorful spotlights and neon (lighting by Justin Townsend) add to the overall mood of in-your-face fervency. Costumes (by Emily Rebholz), and hair, wigs, and make-up (by J. Jared Janas) capture the uninhibited look and style of contemporary teens, in contrast with Steve Healy’s staid business suit and the middle-class middle-aged attire of Mary Jane and her circle of suburban housewives.

Although many of the central songs and scenes impart the voice of youth and the struggles of women, Jagged Little Pill is a show that holds cross-generational and cross-gender appeal – for fans of Morissette’s progressive and prescient work of the 1990s, those who weren’t born yet but are that age now, everyone who’s ever faced any of the dramatic challenges that confront the characters, and anyone who wants to understand the perspective of the other. You will be wildly entertained while, in the words of the show’s promising finale, “You Learn.”

Running Time: Approximately two hours and 35 minutes, including an intermission. 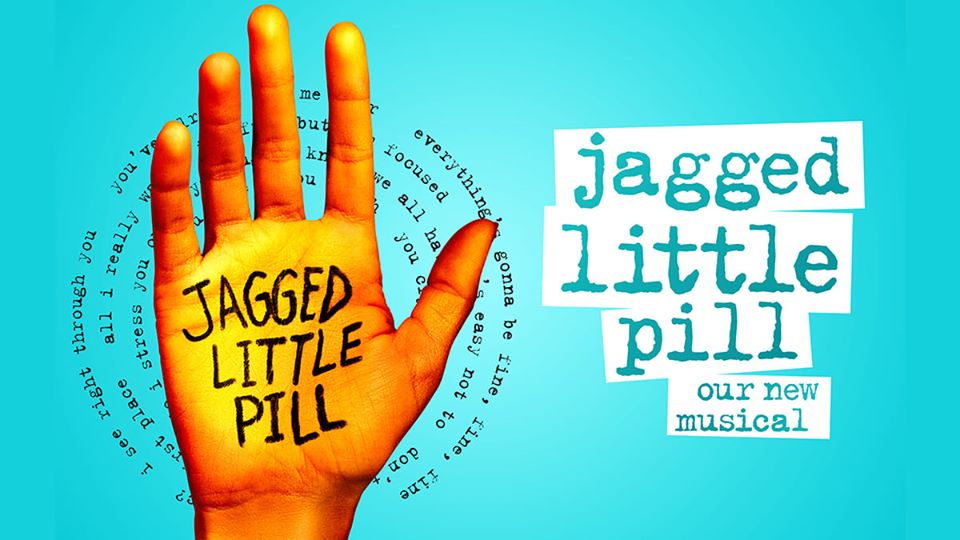