Playwright Donja R. Love, prompted by the tenth anniversary of his own diagnosis, explores what it’s like to be Black, queer, and HIV+ in one in two, now playing at The Pershing Square Signature Center in a resounding world-premiere production with The New Group. The title refers to the shocking statistic that one out of every two gay and bisexual Black men will contract the virus, though the infection rate has decreased dramatically or stabilized among other communities and identifying groups.

That inconceivable fact, along with director Stevie Walker-Webb’s comment that “Being Black in America is absurd,” inspired Love’s use of the theatrical style of absurdism for his highly inventive and profoundly impactful new three-hander. In keeping with the genre, he injects unexpected humor and a tone of surreality into his unique reflection on the staggering issue and his personal response to having “to navigate the world to survive.” The result is a deeply meaningful absurdity that brings both laughter and tears, along with increased awareness.

Throughout the meta-theatrical show, there are breaks through the fourth wall to address the audience directly and to involve us in the critical reality of the theme, and the trauma, of being the one. It could be any of the three actors – Jamyl Dobson, Leland Fowler, or Edward Mawere – so each must be prepared to assume the lead, or the supporting roles, at every performance. Their main characters are identified first as person on the left, middle, and right, then as the numbers 1, 2, and 3, and the others as the generic figures they represent (e.g., Nurse, Bartender, Mom, Trade, Kinda Ex-Boyfriend), to underscore the urgent necessity to see them not just as statistics or stereotypes, but as real human beings with individual names and identities, despite their shared situation.

Eventually we do hear the name of Donté, the titular “one” that Mawere, making his impressive Off-Broadway debut, was selected to play on the date I attended. Under Walker-Webb’s direction, he and his superb cast mates relay all of the inherent (and often fragmented) thoughts and feelings with natural empathy and flawless comic timing, unleashing a floodgate of raw emotion, from heartrending pain, outbursts of rage, and the stigma of secrecy and shame, to the saving humor, grace, and joy of thriving and finding a community. None of it seems forced, cloying, or gratuitous; each of the actors offers distinctive characterizations in the roles they play (including their adorable prescient role-playing as children discovering their bodies) and in the adult situations of simulated sex and nudity that fit the theme and experiences, with engaging performances that are perfectly suited to Love’s creative intent.

A minimalist white set (scenic design by Arnulfo Maldonado) engenders a dreamlike sensibility of the play taking place “Nowhere, everywhere (or, a waiting room),” to signify the absence of attention given the widespread infection, and the men awaiting their results and for the epidemic to end. Barefoot and shirtless in neutral-toned pants, they represent Everyman in their community, then make quick changes into their supporting roles with the addition of a telling prop or an item of clothing (costumes by Andy Jean). Sudden staccato shifts in lighting (by Cha See) and sound (Justin Ellington) from scene to scene contribute to the show’s fractured tone of abstraction, and a running count of the number of gay and bisexual Black men infected with HIV on projection screens set into the back wall (video design by Alex Basco Koch) provides an inescapable and chilling jolt back to reality.

The New Group’s production of one in two is a powerful exploration of an ongoing crisis that’s funny and touching, provocative and disturbing. But most importantly, it’s a fervent call for responsibility and action to make this raging pandemic stop. See the show and heed the call. 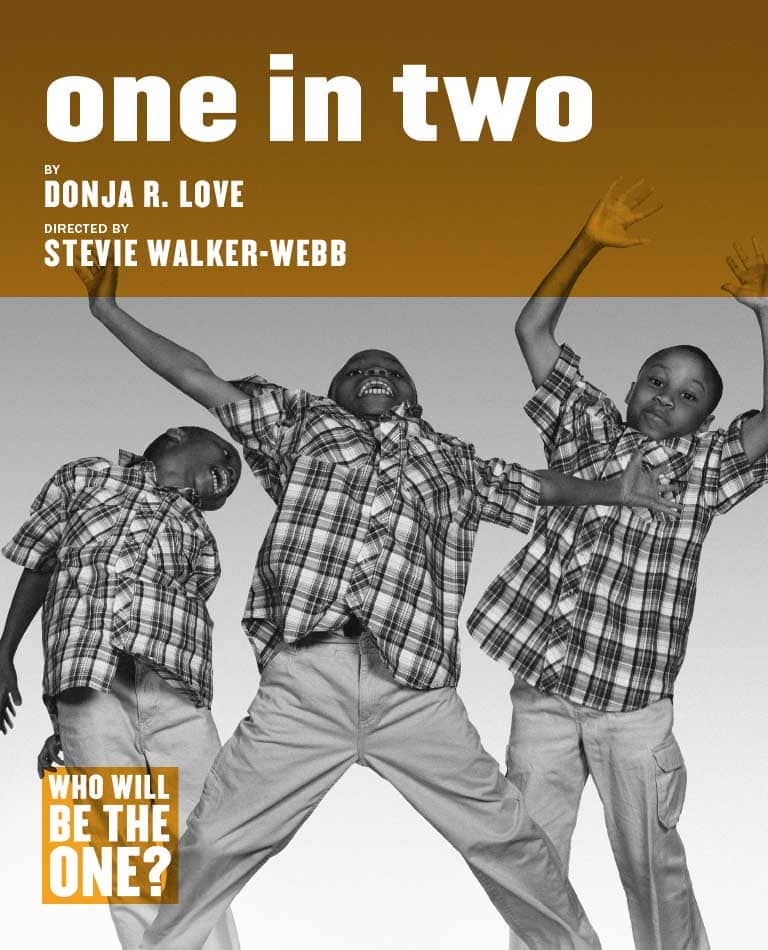