As the year draws to a close, we asked DCMTA writers to think back on the productions that left an indelible impression on them in 2019. 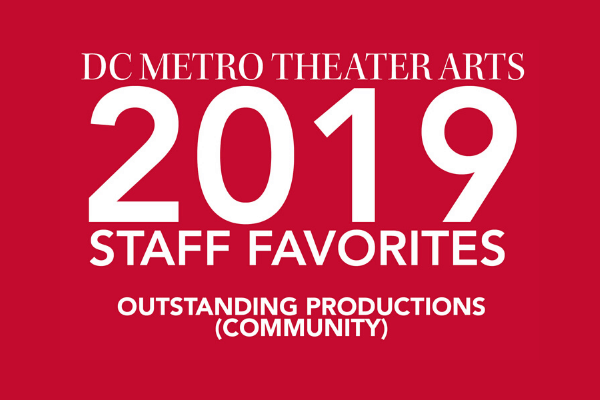 Here are the community theater productions that left the biggest impression on our writers this year.

A Gentleman’s Guide to Love and Murder at Reston Community Players
This production was fantastic in every aspect. I laughed until I cried and then laughed some more. A Gentleman’s Guide is a hilarious show and RCP executed it fantastically: the vocals, lead performances, comic timing, choreography, set design. A complete success – Kendall Mostafavi
Bob Ashby’s Review

A New Brain at the Colonial Players of Annapolis
It’s an unusual musical, based on composer and lyricist William Finn’s real-life near-fatal medical emergency and treatment. Colonial staged it perfectly, with eminently watchable physicality. The tango dance to the song “Brain Dead”, between actors Ron Giddings and Shane Conrad, in particular, was just amazingly complex and precise, and they pulled it off beautifully. – Charles Green
William Powell’s Review

Annie at Prince William Little Theatre
From toe-tapping numbers to adorable orphans, there are few things as purely wonderful for the soul as a production of Annie, and Prince William Little Theatre delivers a production like no other. Director Melissa Jo York-Tilley takes a much-beloved story and makes it feel fresh. – Leandra Lynn
Leandra Lynn’s Review

Appropriate at Silver Spring Stage
Silver Spring Stage is known for producing professional-level community theater, garnering more WATCH nominations and awards than any other company in Maryland. The Obie-award winner Appropriate by Branden Jacobs-Jenkins is the kind of play they do best: contemporary, topical, hard-hitting (one could almost say harrowing) but with touches of black humor, and stuffed full of roles that actors can sink their teeth into. – Jennifer Georgia
Jennifer Georgia’s Review

Curtains at The Arlington Players
The Arlington Players’ new production of Curtains brings all that musical theater promises an audience: gorgeous sets, outsized talent, big production numbers, and memorable musical pearls strung along an engaging plotline. As with any good crime scene, there are many fingerprints on this murder mystery, with music by John Kander, lyrics by Fred Ebb, and book by Rupert Holmes, all adapted from an original book and concept by Peter Stone. – Jim Pearson
Jim Pearson’s Review

Equivocation at Silver Spring Stage
Equivocation by Bill Cain takes place in 1606, in the wake of the failed Gunpowder Plot. James’s devious counselor, Robert Cecil, feels he has found the perfect person to educate the public about the crisis. The vehicle will be a play, and the author will be none other than…William Shakespeare! Equivocation has many pleasures, from the witty script, to the appealing performances, to some unusual directorial touches by director Madeleine Smith which keep the audience laughing. There is an underlying theme which resonates particularly for audiences of today: What does it mean to tell the truth in a difficult time? – Sophia Howes
Sophia Howes’ Review

Last Summer at Bluefish Cove at Dominion Stage
Life has never been easy for women who love other women. Last Summer at Bluefish Cove—written by Jane Chambers and widely regarded as the first production to portray lesbians in a positive light—takes a crack at illuminating the complexity of these women’s lives in the 70s and 80s. Directed by Sharon Veselic, this production at Dominion Stage is helping to remind audiences of the important role that women have played in queer theater history. – Darby DeJarnette
Darby Dejarnette’s Review

Little Red’s Most Unusual Day by the Victorian Lyric Opera Company at the Kentlands Arts Barn
Offenbach and Rossini are not names that roll easily off most children’s tongues. Luckily for parents looking for a fun way to introduce their children to classical music, the work of these venerable composers became delightfully accessible in the Victorian Lyric Opera Company’s production of Little Red’s Most Unusual Day. A sprightly cast of four brought the story to life with operatic vocals and comedic timing. Mary Frances Dini’s direction featured nimble set changes and a clever sequence and Stevie Miller’s music direction resulted in a fast-paced production that clipped through some of classical music’s most memorable melodies (Figaro! Figaro! Figaro!), trimmed to match a child’s attention span. – Nicole Hertvik
Nicole Hertvik’s Review

Oliver! at Kensington Arts Theatre
The question when reviving a classic musical is always how much to preserve and how much to adapt. The KAT production goes for a bit of both. The first impressions promise something new: on entering the theater, one sees a stage with bare platforms and brick walls, but in between is a large screen with projections of brass and iron cogs and gears – this is a Steampunk Oliver! It works well in this case, freeing the production from the constraints of any particular historical period, while imbuing it with both the sense of romance and adventure inherent in Steampunk (think mad scientists, genius inventors, intrepid explorers), with a hint of the oppressive atmosphere of the industrial revolution.
– Jennifer Georgia
Jennifer Georgia’s Review

The Drowsy Chaperone, Goddard Music and Drama Club
If you are looking for some enjoyable entertainment before the holiday rush sets in, see The Drowsy Chaperone by the Goddard Music and Drama Club at the Barney & Bea Recreation Center. This production is pure fun with all elements working together to make this production fun and enjoyable. – Andy Arnold
Andy Arnold’s Review

The Producers at Little Theatre of Alexandria
You can’t lose with this show: the book for this musical is by Mel Brooks and Thomas Meehan, and Brooks wrote the music and lyrics. Colin Taylor provided music direction and conduction, and Stefan Sittig choreographed. Director Kristina Friedgen has directed a show that’s fun from start to finish. – William Powell
William Powell’s Review