As the year draws to a close, we asked DCMTA writers to think back on the shows that left an indelible impression on them in 2019. Here are the community theater performances that made the biggest impact on DCMTA writers this year. Performers are listed in alphabetical order by last name. 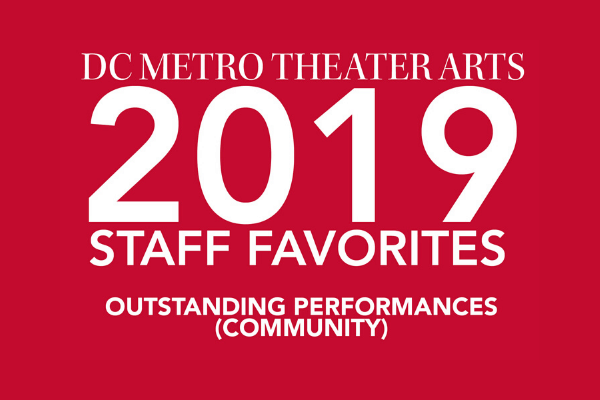 Cole Edelstein as The Artful Dodger
Oliver! at Kensington Arts Theatre
The show really kicks into high gear with the appearance of Cole Edelstein (who, although only a high school sophomore, is an Equity actor who has appeared on Broadway) as The Artful Dodger. His energy singing a rousing “Consider Yourself” while bounding a foot in the air with every step lifts the entire cast. – Jennifer Georgia
Jennifer Georgia’s Review

Ensemble (full list of names in review)
Curtains at Arlington Players
The ensemble is the ebullient heart of this show. Filled with talented actors, singers, and dancers, their high energy and musical ability shines joyously throughout. Their ease with one another in the drops, dives, tosses, and high kicks that pepper each big number leaves the audience knowing that this is musical theater at its most beloved. The final round of “In the Same Boat” is a masterly crescendo to a magical evening. – Jim Pearson
Jim Pearson’s Review

Ensemble (Kevin Dykstra, Katie Kramer, and Adam Ressa)
The (curious case of the) Watson Intelligence at the City of Fairfax Theatre Company
In a show that covers multiple characters over four different timelines, this three-person cast did an incredible job keeping each story-line and character distinguishable in a fascinating and complicated show about the evolving relationship that people have with electronics and the ways in which live human connection has been eroded as a result. – Kendall Mostafavi
Kendall Mostafavi’s Review

Ensemble (Matt Calvert, Sean Garcia, Tobin Moss, Michael Omohundro, Aaron Talley, Dylan Toms, Anthony Williams)
The Full Monty at Workhouse Arts Center
The Full Monty is an adult production filled with a wide spectrum of characters that all get their moment in the spotlight. Each featured actor was a joy to watch and the show was stacked with show stoppers upon show stoppers. – Kendall Mostafavi
Kendall Mostafavi’s Review

Lexi Haddad as Lucy Harris
Jekyll and Hyde at Wolf Pack Theatre Company
Lucy Harris, a down-and-out sex worker who has the misfortune of crossing paths with Dr. Jekyll, is played by Lexi Haddad. Haddad provides a sultry contrast to Haines’ airy soprano. Together, they make “In His Eyes” one of the best numbers in this production. Haddad, on her own, transforms the heartbreaking Lucy into the underdog that you just can’t help rooting for. This is most apparent in her incredible rendition of “Someone Like You”—easily the strongest song from this musical and a show-stopper in the Wolf Pack production due to Haddad’s warm vocals. – Darby DeJarnette
Darby DeJarnette’s Review

Maura Claire Harford
Appropriate at Silver Spring Stage
But the real core of the play is Maura Claire Harford’s wrenching performance as the oldest sister, the one who stayed home, took care of their father and her drug-addicted brother, and pickled herself in alcohol and vitriol. Her bitterness, suspicion and resentment poison everything they touch. Having shown us in the first act that she is an irredeemably awful excuse for a human being, in the second act she manages to make us feel sorry for her, before turning around and starting a melee that leaves everyone battered, bruised and bloody. Harford’s portrayal of this complex character is a tour-de-force.- Jennifer Georgia
Jennifer Georgia’s Review

Elizabeth Hester as Miss Adelaide
Guys and Dolls at Kensington Arts Theatre
“You promise me this. You promise me that. You promise me anything under the sun…” belts out a swell Elizabeth Hester as Miss Adelaide, the cherry on top of a high-energy revival of Frank Loesser’s classic Broadway musical of 1940s era New York City high rollers meets holy rollers at the Kensington Arts Theatre. I promise you that it is worth seeing this audience-pleasing production just for her. A former WATCH winner for Outstanding Lead Actress in a Musical, Hester shows why she is the winner in this production—and why she should be a top contender for future musical comedy roles. – Caroline Bock
Caroline Bock’s Review

Christa Kronser as Janet Vad de Graff
The Drowsy Chaperone at Goddard Music and Drama Club
As Janet Van der Graaff, Kronser’s voice shifted between a Nell Fenwick silliness to a poor girl’s North East vernacular as she embodied her character brilliantly. When Janet shook her hips dancing during “Show Off,” the audience could practically see men falling at Feldzieg’s Follies. The song and dance revealed the character’s love for performing. – Andy Arnold
Andy Arnold’s Review

Matt Leyendecker as Falstaff
The Merry Wives of Windsor at Colonial Players of Annapolis
Matt Leyendecker is pure comedy as Falstaff. He constantly moves around the stage, whether swaying his hips in lust or sliding behind a platform to evade a husband, always getting laughs. You would never suspect that he took the part only five days before opening night, due to cast changes from a medical emergency, as he speaks Shakespeare’s lines naturally and easily, giving a fantastic performance. – Charlie Green
Charlie Green’s Review

Brian Lyons-Burke as Fagin
Oliver! at Kensington Arts Theatre
Brian Lyons-Burke excels as Fagin, who delivers his patter songs “You’ve Got to Pick a Pocket or Two,” “Be Back Soon” and “Reviewing the Situation” with perfect precision and a full range of emotion. He makes a part that has sometimes descended into caricature into a well-rounded, sympathetic character. – Jennifer Georgia
Jennifer Georgia’s Review

Natalie McManus as Martha Brewster
Arsenic and Old Lace at Rockville Little Theatre
She gave an outstanding performance as Martha Brewster by embodying the character of an elderly – and murderous – aunt with her delivery, voice, and movements. – Andy Arnold
Andy Arnold’s Review

Alia Robinson as Tracy Lord
The Philadelphia Story at The Sterling Playmakers
Alia Robinson’s portrayal of Tracy Lord perfectly captures the character’s restraint, elegance, and high ideals. We see her change during the course of the story, as she absorbs the criticisms of those around her. She comes to understand that she has “everything it takes to make a lovely woman except the one essential: an understanding heart.” Through her interactions with Mike Connor, Dexter, her father and her mother (played with grace and quiet dignity by Beth Bollerer), she learns about her own human frailties and becomes a better person for them. – Pam O’Reilly
Pam O’Reilly’s Review

Michelle Stein as Annie
Annie at Prince William Little Theatre
Michelle Stein puts a completely different spin on the iconic role of Annie. She is equal parts kind and sassy, with a beautifully emotive voice that shines during “Maybe.” “Tomorrow,” possibly the best-known song from the musical, is sung teeming with optimism so infectious, it’s hard not to smile and even harder not to sing along. – Leandra Lynn
Leandra Lynn’s Review

Bailey Wolf as Veronica
Heathers at Rockville Musical Theatre
The focus of the show, Veronica is offstage a total of about 4 minutes and 45 seconds. She has to veer from scared sheep to queen bee to drunken vixen to murderous to remorseful. Bailey Wolf pulls off all of these and more while maintaining a core sweetness that was lacking in both the movie and original musical incarnations. You come away believing that she can restore the innocence of her damaged peers by the force of her personality alone. Her voice is pure and powerful, well suited to the pop pyrotechnics of the role. One of the many highlights of the show is the look on Bailey’s face when she realizes the murders have unleashed a flood of tolerance and goodwill among the homophobic bigots of the town. She and J.D. share some truly gorgeous harmonic duets, especially “Seventeen,” when they hope against hope that they can just go back to being normal teenagers again. – Jennifer Georgia
Jennifer Georgia’s Review