Ah, yes, it’s that most wonderful time of the year: The tingle of frozen breath on the air, the sparkle of lights on the trees, the warmth of spiced cider, and the sublime silliness of Panto. 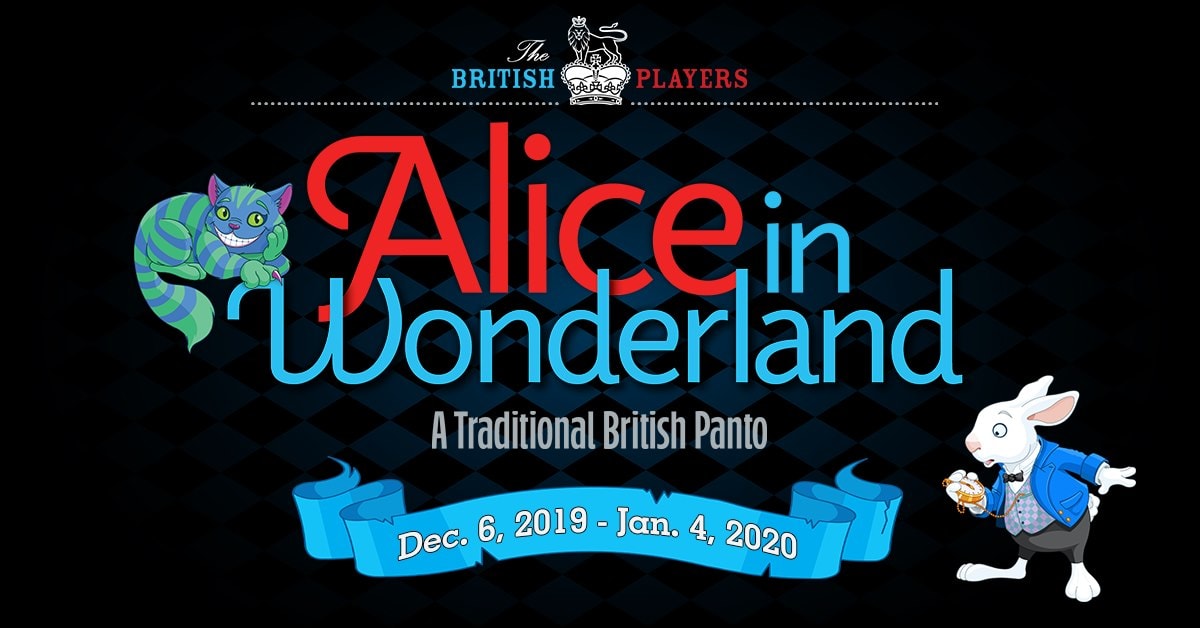 Panto lights up the holiday season in the U.K. in hundreds of village halls, where everyone on stage is a neighbor or a family member of someone in the audience. And that, above all, is the feeling one gets from the British Players’ Alice in Wonderland at the Kensington Town Hall.

The whole production is a labor of love, and it shows. There are far more people working behind the scenes than in front, and often whole families, it seems, do both. Director and Co-Producer Pauline Griller-Mitchell and her Co-Producer Lauren Pacuit have channeled all this talent and effort into a delightful whole.

The set (designed by Mike Lewis and Robert Leembruggen) is a sweet summer fantasy with a large screen in the back where different locations (such as the Palace Garden) are displayed (projections and sound by Matt Mills), and a Tea Party table with pastel cups and a huge teapot off to one side. The costumes, designed by Justine Crimans, and the makeup, by Cathy Dunn, are suitably fantastical, especially for iconic characters like Tweedle Dum and Tweedle Dee, the very elegant Caterpillar, the White Rabbit, the Mad Hatter (who wears not one but two hats), and especially the Queen of Hearts, who is as conical and bedecked as a Christmas tree. They resemble the original Tenniel drawings from Lewis Carroll, but with an extra dash of goofiness.

The characters, too, are taken from the book, and then some. There are the familiar faces, but then others that the Panto form requires, such as the “Dame” always played by a man in drag (the extremely personable and funny Chuck Hoag), in this iteration sporting a very funny Russian accent. (Why? Why not!) There is also the Principal Boy, Jack, who is always played by a female in breeches (the sweet-voiced Emilia O’Connor). There must be villains for the audience to boo and hiss, and here we have a new one, Ms. Hackett, an evil orphanage owner. (Why? Why not!)

The cast is fine, with several standouts. Alice (Amanda Dullin-Jones) is plucky, especially when singing “Don’t Rain On My Parade” in a dungeon. (Why? Why not!) The White Rabbit (Derbyshire native Clare Palace) is funny and charming in the traditional role of comic sidekick to the Dame. The Hatter (Francesca Pisano) has a deadpan naturalistic delivery that contrasts comically with her outlandish appearance. Tweedle Dee and Tweedle Dum (Kathy Suydam and Meghan Williams Elkins) are sublimely silly clowns. And, as was well and fitting, the Queen of Hearts (Laura Andruski) is majestic in her nutty wickedness. As the Bard said, “though she be but little, she is fierce,” and in this case, with the murderous monarch scooting around in a hoop skirt that makes her wider than she is tall, gleefully ordering beheadings and alternately shouting and pouting, the result is hysterically funny.

The music, capably directed by Arielle Bayer from the piano with John-Marc Diner/Benjamin Rikhoff on bass and Mayumi Griffie on drums, fits Panto tradition — songs are plucked from all over, with a few words changed here or there to fit the story. Although this year’s selections are taken primarily from musicals — the opening number is from Pippin, the first-act finale is from Oliver, Tweedle Dum and Tweedle Dee’s party piece is from Gypsy — there are pop numbers sprinkled amusingly throughout. The Act 2 opening number is Pharrell’s “Happy” done as an ensemble tap number (choreography by Nancy Scales Harry), the big number that the Dame and the White Rabbit lead the children of the audience in singing (another Panto tradition) is “Baby Shark,” and the big happily-ever-after finale is, of course, “Celebration!”

All Panto protocols are preserved. The audience is encouraged to gleefully boo the villain and yell “OH NO YOU WON’T!!” every time she says, “Oh, yes I will!!!!!”  and scream “IT’S BEHIND YOU!” whenever a character is being snuck up on. All of this is openly silly and unabashedly corny, and therein lies the fun. In the season when we sing about red-nosed reindeer and animated snowmen, there’s comfort in tried-and-true nonsense. And these days, who couldn’t use a little light-hearted, friendly fun? Why not!