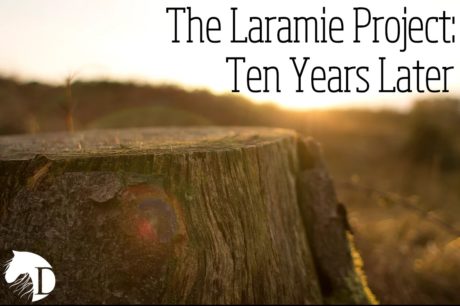 Dark Horse extends theatreWashington membership into Fauquier County, Virginia and adds another professional theatre company to Fairfax County. Dark Horse is in residence at Grace in The Plains and also performs at ArtSpace Herndon.

For those less familiar with the play The Laramie Project: Ten Years Later, it is a sequel to the original The Laramie Project about the murder of gay University of Wyoming student Matthew Shepard. He had left a local bar with Aaron McKinney and Russell Henderson. The following day he was discovered on a prairie at the edge of town, tied to a fence. Shepard later died in a hospital in Colorado. Members of Tectonic Theatre Project traveled to Laramie, Wyoming, and conducted interviews with the people of the town. These texts became the basis for the play The Laramie Project. Ten years later, five members of Tectonic returned to Laramie for interviews following the trial and convictions of Aaron McKinney and Russell Henderson for the murder of Shepard to try to understand the legacy of Shepard’s murder in Laramie and beyond. The Laramie Project: Ten Years Later is the result of those interviews and other research.

The Laramie Project: Ten Years Later was last seen in the local DMV area as a reading hosted by Arena Stage in October 2013. The Dark Horse production of The Laramie Project: Ten Years Later comes at a time when federal data indicates that hate crimes aimed at the LGBTQ community have increased in the past few years. And October 2019 marked the 10th anniversary of the Matthew Shepard and James Byrd Jr. Hate Crimes Prevention Act signed into law in 2009.

With its documentary style, Parnian continued, “in my opinion, The Laramie Project: Ten Years Later is challenging in that it is not as emotionally driven [as the original The Laramie Project]. It comes from a much more objective place…This play is more of a sociological study after the dust settled; it may not be every theatre group’s cup of tea.”

Audra Jacobs and Sarah Akers are assisting Parnian in directing the production. “Theater is all about connecting audiences. What connects audiences more than hearing the words from a town just like theirs? The scars and healing process of Laramie will reach into the hearts of whoever sees the play, whether they agree with the message or not,” said Jacobs.

For Akers, “The Laramie Project: Ten Years Later is an important and relevant story to today’s times. Even beyond the specific event and subject matter, the exploration of how differing beliefs along any given idea spectrum, tangibly affects individuals and a community as a whole is something that currently feels very important to explore and try to understand as a community.”

Matt Thomas noted that The Laramie Project: Ten Years Later is a show that will lead to hard conversations by audiences. “I would say for them to come into this show with an open mind. Come ready to be challenged and to think. Don’t be afraid of the questions it poses. This show does a wonderful job of showing many different perspectives, and I believe that as a result there is something here for all who will come to see it.”

For Kimberly Kemp, the production has a very personal connection. “As a high school theatre educator, I have had many heartfelt and tear-filled discussions with kids over the years who were afraid to come out because they knew they would not be accepted by parents, friends or their community.  It hurts my heart to admit, I’ve had students who were sent to therapy because their parents thought it was just a phase or threatened with conversion therapy because it’s not moral. Mothers have confessed to me that they knew, but were worried for the safety of their child if they acknowledged it to their spouse. There is more work to be done and being a part of this play is just one way to demonstrate that we still need to advocate for everyone’s equality and safety, no matter who they love.”

Concluding our conversation, Parnian said this; “There is always more to learn.”

Note: For some productions, Dark Horse Theater produces at both its residence at ArtSpace Herndon and at Grace. For The Laramie Project: Ten Years Later all performances will be at Grace. With winter weather, Dark Horse Theatre indicated that in the event of inclement weather causing show cancellation, you may reschedule your tickets for another performance (space permitting). Please call the box office at 703-537-1071 or visit or check Facebook or Instagram @darkhorseva for weather cancellations.

Note: If interested in laws and policies related to hate crime legislation at the federal and state levels, visit the U.S. Department of Justice.