As the year draws to a close, we asked DCMTA writers to think back on the shows that left an indelible impression on them in 2019. In this category, outstanding professional design, we recognize: 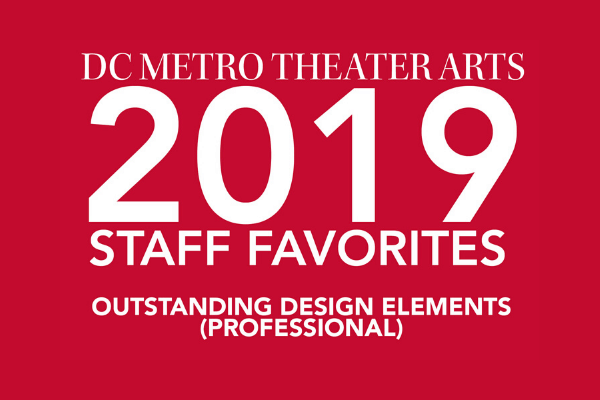 Here are the professional theater designers that left the biggest impression on our writers in 2019. Recipients are listed in alphabetical order by last name.

Nephelie Andonvadis, Set Design
Topdog/Underdog by Avant Bard
To take a seat at Gunston’s Theatre II, I walked into another world, a dingy urban world full of outside noises. A 2×4 framed structure covered with makeshift cardboard becomes home for Topdog/Underdog as fabricated by scenic designer Nephelie Andonyadis and her team of carpenters, painters, and electricians. – David Siegel
David Siegel’s Review

Mariah Anzaldo Hale, Costume Design
Amadeus at the Folger Theatre
When you’re dealing with a place as rich and decadent as Vienna, in the Holy Roman Empire’s 18th-century heyday, it pays to have a designer who knows how to evoke the delicacy and opulence of Emperor Josef’s court, when he hosted the rival composers Antonio Salieri and Wolfgang Amadeus Mozart. The needlework devoted to the male costumes, for example, the sleek lines of the coats from the late 1700s was exquisite—the bright, pastel shades of Mozart’s duds (with matching wigs!) were also in constant contrast with the darker tones of Salieri’s suits. – Andrew Walker White
Ravelle Brickman’s Review
David Siegel’s Column

Randy Baker, Direction
She Kills Monsters at Rorschach Theatre
Through uncommon uses of environment and intimate passionate performances, Rorschach Theatre seeks to lure its audiences beyond the limits of ordinary theatrical experience. Director Randy Baker went above and beyond this mission with his astounding direction of Qui Nguyen’s She Kills Monsters. This was a massive undertaking, requiring multiple performance spaces, precision timing, dancing, fighting, multi-layered tech, and an ensemble cast that was a single well-oiled machine. This was direction at its finest. – Julie Janson
Julie Janson’s Review

Charlie Barnett (Composer), Doug Bradshaw and Jennifer Schwed (Book and Lyrics)
19 the Musical by Through the 4th Wall Productions
The three creators, who are also co-producers, took the unusual route of staging workshop performances of their work-in-development throughout the DC area before staging the complete work at the National Museum for Women in the Arts in November. 19 the Musical aims to popularize the much-ignored story of the courageous women who fought for decades to get women the right to vote. It tells the story of Alice Paul, Lucy Burns, Ida B. Wells and others through a series of rousing musical numbers and a book that highlights the long and arduous struggle the women endured. – Nicole Hertvik
John Stoltenberg’s Review
Nicole Hertvik’s Interview with Creators Doug Bradshaw and Jennifer Schwed

Chris Cotterman, Direction
Hamlet at Baltimore Shakespeare Factory
Housed in a community room in St. Mary’s Church in Baltimore, Baltimore Shakespeare Factory converted a chapel into a stage with a permanent set, complete with archways, masking and functional curtains, and a second floor with a Juliet-style balcony. Director Chris Cotterman uses the space in every way, including the floor space in front of the audience, which becomes important during the course of the show as the actors go into the pews and break the fourth wall. Cotterman provides a detailed description of the reasoning behind his directorial choices in what is the best program this writer has seen in local theatre. – Mara Bayewitz
Mara Bayewitz’ Review

Misha Kachman, Set Design
Kleptocracy at Arena Stage
One of the scariest moments in Kleptocracy – Kenneth Lin’s drama about the struggle for power in post-Soviet Russia – occurs when the shadow of a tiger prowls the length of an elevated cage. The cage, with or without the tiger, is the work of Misha Kachman, a Helen Hayes Award-winning set designer who left Russia 20 years ago, just as many of the events in the play are believed to have taken place. Kachman captures the sense of menace that accompanies Putin’s rise to power. – Ian Thal
Ian Thal’s Review
Ravelle Brickman’s interview with Misha Kachman

Casey Kaleba, Fight Choreography
She Kills Monsters at Rorschach Theatre
The entire team at Rorschach has created something truly special and unique with their production of She Kills Monsters. But in a crowded field of accomplished performances and technical execution, special honors must be given to fight choreographer Casey Kaleba. This show had about as much fighting as it did normal blocking, not to mention that the action took place with multiple weapons mere inches from the audience. Kaleba wasn’t deterred for a second. Every fight was varied, complex, and balanced. This was an epic undertaking, expertly executed. – Julie Janson
Julie Janson’s Review

Chris Lee, Lighting Designer, and James Kronzer, Scenic Designer
Assassins at Signature Theatre
Lee and Kronzer worked flawlessly together to bring Signature Theatre’s production of Sondheim’s difficult and quirky play to life visually. Kronzer’s rough-surfaced doors and panels accentuated the inherent callousness of the drama while they also accommodated swift entrances of the characters and the occasional prop. The famous balcony at Ford’s Theater, draped with faded bunting, reminds us throughout the production of Booth’s primacy among the gallery of misfits. Lee’s dramatic lighting is perfectly pitched to move this revue-like show from its zany heights to its dark and sinister lows. – Amy Kotkin
Amy Kotkin’s Review

Robert McNamara, Artistic Director
Beckett Trio, Part Two by Scena Theatre
Beckett Trio, Part Two, “Come and Go” is a choreographed dream of precision, small movement, and a few deftly placed words among three women: one dressed in deep blue/black (Ellie Nicoll), another in sharp red (Jen Bevarelli), and the third in spring green (Lewshá-Camille Simboura). They wear hats that obscure their eyes and foreheads. The three sit close together on a bench. At first, they interact silently, then with deliberate whispers and reactions such as sucking in their breath and one-word exclamations. At times, one woman removes herself from the bench as if sleepwalking in an angular manner. But each of the three has a turn disappearing, then reappearing. – David Siegel
David Siegel’s Review

Matt Reckeweg, Direction; Michael Winc, Sound Design; Alex Vernon, Puppet Design; Frank Labovitz, Costume Design
Visions of Love at Pointless Theatre Company
Director Matt Reckeweg has done a brilliant job capturing the feel and flow of Charlie Chaplin’s style. With the help of Sound Designer Michael Winch, the show moves as one continuous dance with various interludes, marking significant moments in the story.
Alex Vernon’s puppet designs are gorgeous works that add another layer of artistry and accentuate the dance-like movement of the actors, who must manipulate the puppets in sync with each other and the music. – Kendall Mostafavi
Kendall Mostafavi’s Review

Robert Richmond, Direction
Nell Gwynn at The Folger Theatre
Although Nell Gwynn was a runaway hit in London, where it opened in 2016, Director Robert Richmond has added a number of elements to the show, including a procession down the aisle and a cascade of oranges thrown from the balcony, transforming the Folger into a 17th-century theater. Richmond describes the play as “a love letter to Shakespeare and a tale of romance between a kind and a commoner that lasted longer than most marriages. – Ravelle Brickman
Sophia Howes’ Review
Ravelle Brickman’s Interview with Director Robert Richmond

Luis Salgado, Choreography and Direction
Fame! at GALA Hispanic Theatre
As director and choreographer, Luis Salgado is the heart and soul of this production. Fame! marks Salgado’s triumphant return to DC after winning last year’s Helen Hayes Award for directing GALA’s In the Heights. “There are many directors with talent,” one audience member said to me after seeing the show the other night. “But Luis directs from the heart.” That effort resulted in one of the most compelling theatrical productions I saw in 2019, with choreography so crisp, so vivid and alive, that the excitement pulsates off the stage and straight into your heart. – Nicole Hertvik
Nicole Hertvik’s review

Jason Sherwood, Scenic Design
How To Catch Creation at Baltimore Center Stage
Outside and concentric to the Golden Gate Bridge set piece’s circle, there was an approximately three-foot-wide ring/track that rotated counterclockwise, that the actors walked on to get from place to place. The ring/track would magically transport additional set pieces on and off stage by appearing and disappearing behind a circular, black curtain. An overhead scrim represented a cloudy sky. Scenic Designer Jason Sherwood did astounding work here. – William Powell
William Powell’s Review

Anastasia R. Simes, Set and Costume Design; Genevieve Dornemann, Production Stage Manager; Irina Tsikurishvili, Choreography
The Tempest at Synetic Theater
The overall technical design elements for The Tempest included dancing through the air and then in ankle-deep water (in a striking on-stage lake), with the extra weight of the water against everyone. Such athletic skills had me in awe. This production is one of rousing movement and athleticism with set and costume design by Anastasia R. Simes, production stage manager Genevieve Dornemann, choreography by Irina Tsikurishvili and all those who made the watery production such a success. – David Siegel
David Siegel’s Review

Ivania Stack, Costume Design
The Heiress at Arena Stage
The Heiress’ rich but painful life is adorned by a period wardrobe of beautiful, heavy satin and embroidered fabrics, lavish, wide-hooped skirts and elegantly detailed morning coats and top hats worn by the rich and famous women and men of the day. – Ramona Harper
Ramona Harper’s Review

Stage Managers: All of you!
Being a stage manager of a theater production brings challenging, yet too often unheralded responsibilities that begin long before an audience steps into a theater to take a seat. As the production journeys to opening night, a stage manager can work 60-75 hours per week during rehearsals, tech, and previews. No show is simple or on auto-pilot. Once a show opens, the stage manager is in a booth with headsets on, following the script line by line, setting up and releasing sometimes hundreds of cues. The stage manager is responsible for the safety of the actors and all concerned. – David Siegel
Stage Managers work long hours for rich rewards by David Siegel