When Dion Boucicault’s premiere farce London Assurance made its debut at Covent Garden in 1841, the 20-year-old Irish actor and playwright became an instant success in England, garnering immediate fame and fortune. Irish Repertory Theatre’s current revival of Boucicault’s madcap comedy of manners delivers the vintage humor and social commentary that launched his illustrious career (and presciently lampooned episodes of his own scandalous life in London and New York, as summarized in the program’s biographical notes). Centered on the inextricably intertwined romantic and financial wheeling and dealing of 19th-century British society, the play provides a silly send-up of arranged marriages and dowries, in a story filled with deception and mistaken identity, dishonor and dueling, and the upper class generally behaving badly and getting away with it.

Directed by Charlotte Moore with a fast pace, rapid-fire banter, and expressive physicality, the story follows the grossly mismatched but fiscally advantageous betrothal of the 60-something Sir Harcourt Courtly to eighteen-year-old Grace Harkaway, whose dowry provides a £15,000/year income, along with the inheritance of her late father’s estate (should she refuse the marriage, it will go to Courtly’s son Charles, and Grace will be left indigent). But a series of outlandish encounters and mishaps ensue with the arrival of the ill-suited fiancé, and a supporting cast of characters from his townhouse in London, at Oak Hall – her uncle Max’s country residence in Gloucestershire – which set the couple’s first meeting and intended nuptials into a zany tailspin.

The production’s immersive staging includes direct-address asides to the audience and entries of the actors from the lobby and down the aisle of the IRT’s intimate theater space, which serve to involve us fully in the parodic proceedings. And a spirited cast of ten embraces the eccentric characters, their exaggerated personalities, indicative names, and wacky hijinks with full-out gusto (despite some long-winded expositions and redundancies that could use some editing, to pack more punch into the lengthy running time).

Taking the lead of the vain, lecherous, and covetous Courtly is the terrific Colin McPhillamy, who denies his age, rouges his cheeks, and deludes himself (though not the others) with his misperceived belief in his own attractiveness as “a man of fashion.” Caroline Strang brings a proto-feminist intelligence to the beautiful, self-possessed, and cynical Grace; she wisely sees through the men and outsmarts them in their games of mercenary bargaining and duplicity, while nonetheless falling for Courtly’s drunken and debt-ridden son Charles (played by the versatile Ian Holcomb), who assumes a false identity of “Augustus Hamilton” to fool his father. But Harcourt barely notices their blossoming love, since he is smitten with (and played by) Grace’s friend Lady Gay Spanker (the outstanding Rachel Pickup), a vibrant and flirtatious equestrian with a lust for life and an elderly husband (Robert Zukerman, at first doddering, then explosive) who allows her certain liberties.

Also lending great support are Brian Keane as Max Harkaway, the pragmatic uncle in charge; Craig Wesley Divino, who is appropriately conniving as the mysterious ne’er-do-well Dazzle (no one is exactly sure who he is); and the hilarious Evan Zes as Mark Meddle, a meddlesome eavesdropping lawyer driven by greed, not justice, whose readily legible facial expressions, postures, and gestures are consummately suited to his character’s questionable ethics. Rounding out the fine ensemble are Elliot Joseph and Meg Hennessy as the aptly named servants Pert and Cool.

As engaging as the cast is the lavish design that effectively transports us to the aristocratic lifestyle of 19th-century Britain. James Noone’s revolving set efficiently transitions from the foyer of Courtly’s tastefully appointed London townhouse to the courtyard of Max’s Gloucestershire estate, then opens up to its luxurious antique-filled parlor. Period-style costumes by Sara Jean Tosetti and hair and wig design by Robert Charles Vallance capture the look of the era and the status and special interests of the characters. They are well augmented by Michael Gottlieb’s lighting, props by Sven Henry Nelson, sound by M. Florian Staab, and original music and sound by Ryan Rumery.

Though London Assurance is a period piece and, consequently, some of it seems laughably dated, overly talky, and ridiculously contrived, there is enough in it that is still risible and recognizable in the entitled shenanigans of the wealthy and privileged. And while it might not keep you laughing out loud, it offers an amusing diversion with some top-notch comedic performances that will leave you thinking about long-held conventions of “sex and station” that are still in need of some updating in our present times. 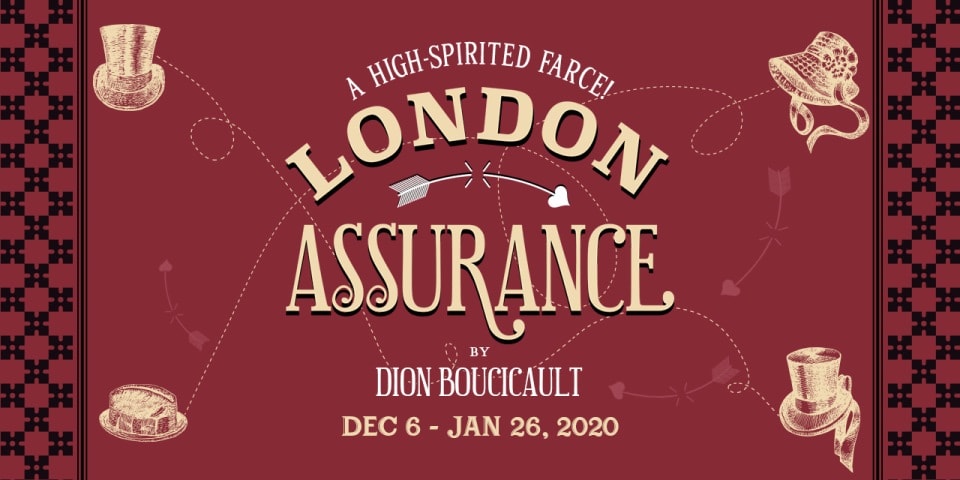