Imagine you’ve got tickets to the theater and the star attraction gets stage fright and sends a note that she’s not coming. But the house is full and the show must go on, so if you’re creator/performer Peter Michael Marino, you enlist the aid of the audience to invent one. That’s the premise of Show Up, Kids!, a high-energy high-decibel participatory comedy designed for ages 3-10, now back at The Kraine Theater following acclaimed sold-out runs at the 2018 Edinburgh Fringe, The Complex Hollywood, and other regional venues in the US.

Staged in the ramshackle East Village venue and employing a makeshift colorful set and props, the fast-paced show, directed by Michole Biancosino, highlights the importance of using your imagination to make the best of any situation you’ve been handed. Marino does just that, captivating the kids with his silly voices and wacky movements, natural repartee and hilarious ad libs (some that go over the heads of the young ones but elicit guffaws from their accompanying adults), musical segments (music by Michael Andrew), and engaging appeal for help from anyone willing to give it (no one is forced to take part, only volunteers are selected).

The rambunctious crowd at the performance I attended participated enthusiastically, while largely disregarding Pete’s stated rules of staying seated and raising your hand if you have something to say (which the parents did little to enforce, even during his request for a “silent night”). Instead, they became increasingly active and vocal, responding with full-out exuberance to Marino’s calls for suggestions and assistance in zany semi-improvised bits with a tee-shirt, a simple cardboard box, a rubber chicken (or is it a bunny?), brightly hued wigs, post-it notes, and more, as they developed the story with obvious elation and assurance.

Along with the delights of its wild comedy and interactive experiences, Show Up, Kids! teaches young audiences some valuable lessons about honoring your commitments, being creative, expressing your ideas with confidence, and being true to yourself – important takeaways from a fun-filled introduction to the joys of live performance. 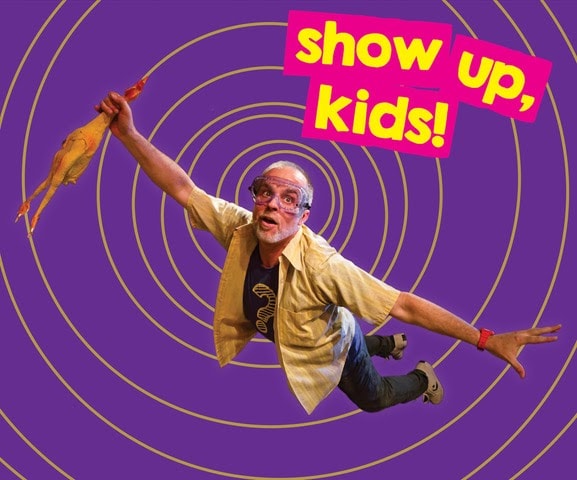