Conceived, written, and directed by Gerard Alessandrini, Forbidden Broadway: The Next Generation, the latest installment in his outrageous parodies of the shows and stars of the Great White Way, returns to The York Theatre Company for a limited engagement, straight from its critically acclaimed smash-hit run at The Triad – and it’s already been extended a week by popular demand. In this hilarious all-new edition, the Tony-winning writer takes aim at the current trends in New York theater, from jukebox musicals to re-envisionings of familiar classics, in a rapid-fire spoof that leaves no one spared and no shot thrown away.

When a family can’t agree on which Broadway show they want to see, Hadestown’s André De Shields – or his devilishly funny doppelgänger – takes them on a wild train ride through the 2019 season, with irreverent stops at a variety of famous scenes and songs lampooned by a riotous cast of five. Accompanied by Fred Barton on piano , the top-notch triple-threats – Chris Collins-Pisano, Immanuel Houston, Aline Mayagoitia, Jenny Lee Stern, and thirteen-year-old Joshua Turchin – deliver Gerry McIntyre’s uproarious choreography and Alessandrini’s new laugh-out-loud lyrics, set to a score of favorite show tunes, with perfect comic timing, masterful moves and vocals, spot-on impersonations, and a tongue-in-cheek awareness that, for appearing in this, “You’ll Never Work Again” (sung to the melody of Carousel’s “You’ll Never Walk Alone”).

Fortunately for them, and for Forbidden Broadway’s enthusiastic audiences of the past 38 years (the original Off-Broadway revue opened in 1982), this is an industry that can take a joke, laugh at itself, and accept the old maxim that “imitation is the sincerest form of flattery.” And so the show happily skewers everything from the “skimpy costumes” and “vulgar . . . kitschy” sexploitation of “Moulin Rude” and the “angry” social consciousness of the now politically-correct “Woke-lahoma!” to the exorbitant production costs and sensory overload of Frozen’s “Overblown” design (in an over-the-top powerhouse send-up of “Let It Go” by Mayagoitia) and double ticketing for the two-part Harry Potter and the Cursed Child (with “Magic for Two” that makes your money disappear, twice).

The non-stop numbers are filled with witty observations and biting insights into the direction Broadway has taken, including the recognition that “Everything’s Got to Be a Musical” and “Everything Now Is Inclusive,” featuring impeccable sidesplitting emulations of Beetlejuice firebrand Alex Brightman, Hamilton sensation Lin-Manuel Miranda (two highlights by the outstanding Collins-Pisano), Tootsie’s cross-dressing Santino Fontana (by the young Turchin in drag) and the ever-flamboyant Billy Porter (by the terrific Houston, who also plays De Shields). There are hysterical take-offs on the ubiquitous violence and drunkenness of The Ferryman (asking “How Are Things in Irish Drama” to the tune of “How Are Things in Glocca Mora” from Finian’s Rainbow), the replacement of the “Younger than ever!” lead actor in Dear Evan Hanson (“Evan Has-Been”), and the gimmick of Fiddler in Yiddish (changing the iconic “Tradition” to “Translation”), all of which kept me howling.

Along with the satires of the stage are skits that poke fun at the screen’s theatrically themed Fosse/Verdon and Judy, with brilliantly executed parodies of dancing and sparring by Stern and Collins-Pisano in the former, and Stern’s show-stopping portrayals of both Judy Garland and Renée Zellweger in the latter. And, in another memorable segment (“There’s Gotta Be Something Better Than This”), Mayagoitia nails the “Kewpie doll” look and voice of Broadway legend Bernadette Peters. The priceless performances are enhanced throughout by a dazzling array of costumes (Dustin Cross) and wigs (Conor Donnelly) that unerringly replicate those of the originals.

Avid theater-goers will take delight in the clever burlesques of their favorite Broadway performers and shows, and in recalling the ones on which they’re based. But even if you haven’t seen everything, The York’s production of Forbidden Broadway: The Next Generation will give you a fast and funny look at what you’ve missed and what to catch next in the 2019-20 season, through Alessandrini’s rollicking comical lens. 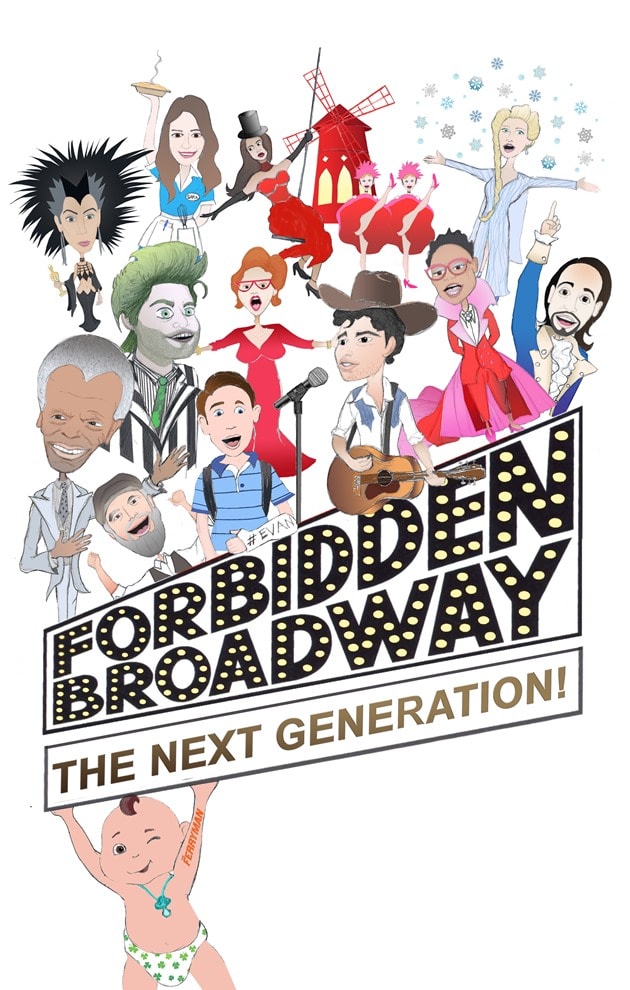 Forbidden Broadway: The Next Generation plays through Sunday, February 16, 2020, at The York Theatre Company (in the lower level of Saint Peter’s Church) – 619 Lexington Avenue, New York City. For tickets, call (212) 935-5820, or purchase them online.

15 Questions in 15 Minutes with the legendary Marilyn Maye