To coincide with the celebration of the Lunar New Year this weekend, Pan Asian Repertory Theatre, now in its 43rd season, has presented a remount of The Emperor’s Nightingale (which made its debut four years ago) for a limited January engagement at Theatre Row. Damon Chua’s commissioned adaptation of Hans Christian Andersen’s beloved 1843 fairytale “The Nightingale,” inspired by key elements and characters from the original story, incorporates important facts from Chinese history and time-honored Chinese art forms, along with some post-modern expressions and rap, for an entertaining and educational show that will delight young audiences and adults alike!

Set in 18th-century China, during a time of European incursion and poverty throughout the land, the didactic story follows the competition between two sibling Princes, to determine who will succeed their father (played by David Hunyh) as Emperor. While Hongshi (Keit Tai Cao) is aided and abetted by the diabolical Minister Wu (Dinh James Doan), Bao (Jonathan Frye) is instructed by his mother, the Empress (Xiaoqing Zhang), to seek the help of a magical and knowledgeable Nightingale (Leanne Cabrera), who will inform him of what is happening in his country and what he can do to help the suffering people. Through her, he comes to understand the importance of putting the interests of others first, and the moral lesson that a “great leader leads by example.”

Directed by Chongren Fan with an eye on both clarity and fun, the production is well timed, at under an hour, to hold the attention of children aged twelve and under. It’s also guaranteed to dazzle, filled with colorful costumes (by Karen Boyer) and lighting (Leslie Smith), a cut-out set design and engaging puppetry (You-Shin Chen) that combine tradition and innovation, and will instill in them a love of beauty while inspiring their imaginations.

The cast of six portrays not only the human characters and eponymous Nightingale, but also the anthropomorphic animals they encounter on their journey, from adorable pandas and mechanical birds to the hungry roaring tigers (sound design by Joseph Wolfslau) they battle (fight movement by Michael G. Chin), who come off the stage to interact with the audience. They also deliver segments of song, dance, and shadow puppetry interspersed throughout the narrative, and some words and passages in the Chinese language that identify the scenes and summarize the message of the story.

Pan Asian Rep’s mission of “promoting stories seldom told and voices seldom heard,” and providing opportunities for Asian-American theater artists, is well represented by The Emperor’s Nightingale, and it’s a great way to welcome in the New Year. You have one more opportunity to catch this charming production before it flies away! 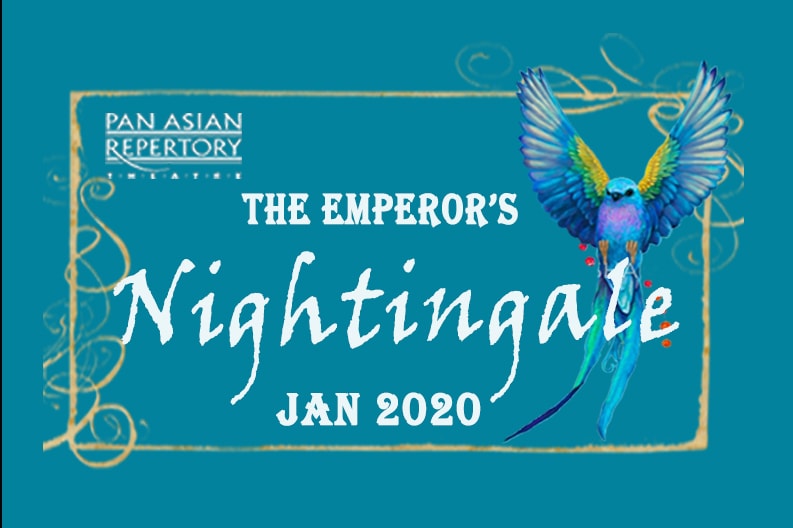