After 50 years of marriage and their move to a retirement community, Nancy and Bill want a divorce and their adult sons Ben and Brian want to do anything they can to prevent it. Amidst the unexpected transition, all are forced to examine their family history, the nature of love and commitment, and the need to communicate before it’s too late in Bess Wohl’s new old-school comedy Grand Horizons, making its Broadway debut with Second Stage at the Helen Hayes Theater.

Directed by Leigh Silverman with sit-com-style pacing and a ‘70s-style sensibility, the dysfunctional figures sling a barrage of biting quips at each other, about aging, death, and relationships – along with way TMI about sex – in a script updated for our current times with a little diversity in the cast of characters and a lot of raunchy juvenile humor and foul language. They navigate the crisis from their different stereotyped perspectives, with differing degrees of emotion, and through a stockpile of dated clichés, all mostly going for the obvious adolescent laughs.

Award-winning actors Jane Alexander and James Cromwell star as the uncommunicative near-octogenarians Nancy and Bill, who have always kept their cool and moved in synch, barely speaking or registering any feelings towards each other – even in their newly expressed desire to part ways. But that well-played reserve is broken when she, a retired librarian, decides “I will be a whole person” and he takes a class in stand-up comedy at the community recreation center, after decades of dedicated work as a pharmacist. The results are uncharacteristic over-the-top outbursts of explicit talk, dirty jokes, and disclosed secrets, which leave their sons in shock, questioning if their aging parents are suffering from senior dementia, and wondering if their whole lives have been a sham.

As Ben and Brian, Ben McKenzie and Michael Urie deliver the childish bickering and sibling rivalry that have persisted into the adulthood of the antithetical brothers. The elder Ben, a straight married lawyer and expectant father, is take-charge and dependable, but also controlling, resentful, and stressed by the responsibilities he has assumed. The younger Brian, gay and single, is self-centered, overtly emotional, and melodramatic (his priceless ongoing reactions to Nancy’s intimate revelations are the most hilarious segments of the show), in keeping with his status as the baby of the family and his position at school as a theater teacher.

Ashley Park is also terrific as Ben’s pregnant wife Jess, the epitome of a touchy-feely therapist who stands up for Nancy but needs to heal herself and the direction she fears her own marriage is taking. Her facial expressions and double-takes speak as clearly, and more honestly, than her laughably familiar psycho-babble. Rounding out the great cast are Maulik Pancholy as Tommy, Brian’s role-playing but straight-shooting pick-up, who calls out his immature behavior and selfish attitude toward his parents; and Priscilla Lopez as the “floozy” Carla, a friendly former receptionist in a dentist’s office, now living in a neighboring retirement complex, who has an awkward encounter with Nancy following the outrageously far-fetched conclusion of Act I (with rip-roaring sound effects by Palmer Hefferan) and plays a pivotal role in her unsettled marriage to Bill.

The generic white-bread set of the look-alike retirement housing (by Clint Ramos), projections of the titular suburban community (Bryce Cutler), recurrent shifts in lighting from day to night (Jen Schriever), and everyday costumes (Linda Cho) are designed to reflect the uninspired quotidian experience of maintaining the status quo on the surface despite the malaise it fosters within, and ultimately manifests on the outside.

In spite of fully committed personality-defining portrayals by its excellent star-studded cast, the basic story of Grand Horizons is a formulaic and lackluster look at the institution of marriage, with unbelievable contrivances that fail to hit the heights of true insight, wit, or originality. It’s just two plus hours of the same old, same old, which the stock characters (and audiences from the 1970s) have experienced for half a century. 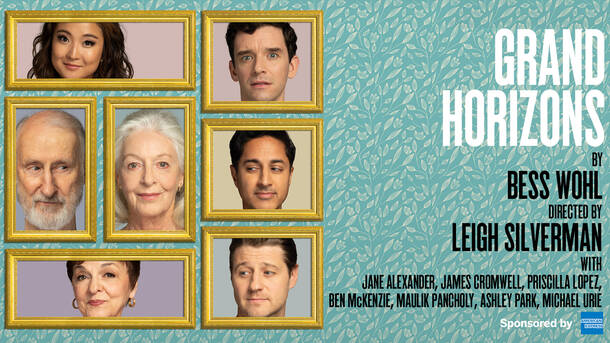