In May 1955, when Howard University staged James Baldwin’s play, The Amen Corner, Washington Post reviewer Richard L. Coe deemed it a “fine play that merits not only your attention but also future productions.” He wrongly concluded that “here is a manuscript play with the makings of a real future and since New York is our theatrical capital, it merits a stage there.” 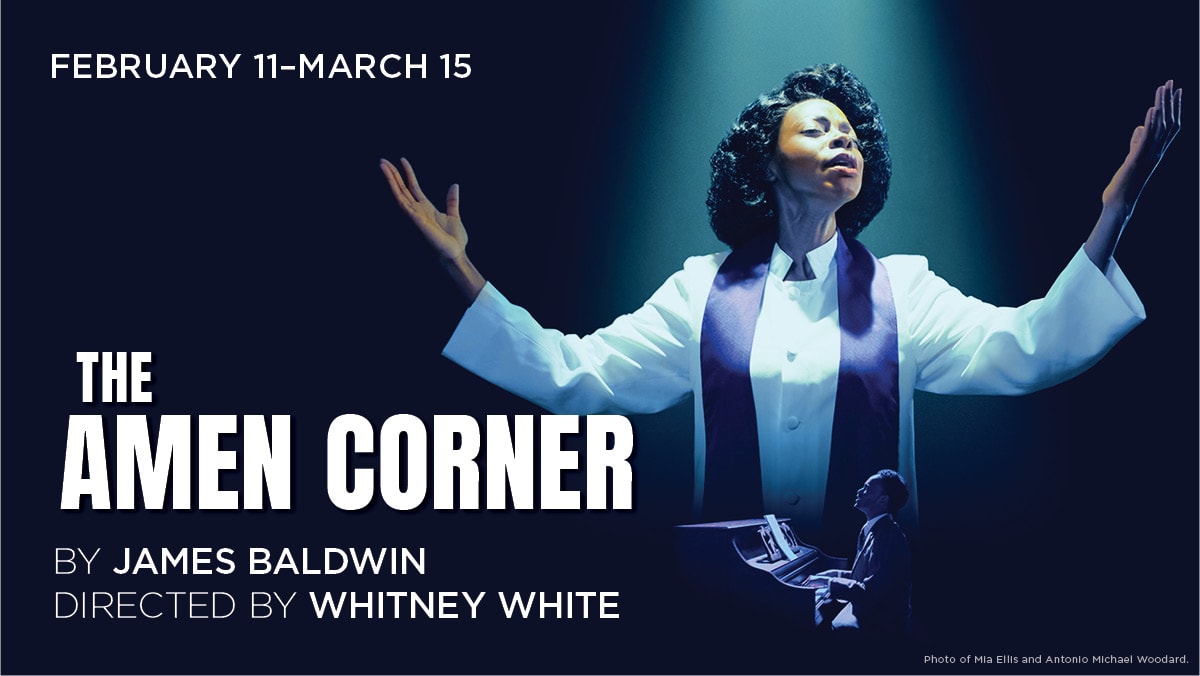 It was not until a decade later that The Amen Corner had a New York opening at the Ethel Barrymore Theatre on Broadway. “The theater landscape at the time was so drastically different than what it is today,” states Soyica Colbert, the dramaturg on the artistic team for the Shakespeare Theatre Company’s production of the play, which opens on February 11 at Sidney Harman Hall in Washington, DC.

Plays about Black life with an all-Black or predominately Black cast were rare in the 1950s theater world. Colbert reflects that during this pre-Civil Rights Movement era, Baldwin’s options for getting his play staged were limited because of the paucity of regional theaters. It took the success of Lorraine Hansberry’s tour de force play A Raisin in the Sun, in 1959, to break the color line that relegated Black plays from being staged on Broadway and perhaps provide a path for the 1965 Broadway production of The Amen Corner.

Although Baldwin is an iconic figure today, he was not so in the 1950s, having only published a handful of book reviews, short essays and the partially autobiographical novel Go Tell it on the Mountain. Today, despite the prominence of Baldwin as not only a writer but also as a cultural arbiter whose quotes appear daily in social media, his plays remain mostly unrecognized beyond academia, actors and Baldwin scholars.

The Shakespeare Theatre Company has hauled this play from the vault and scheduled a month-long series of events titled “Amen, Baldwin!: A Living Celebration” to “honor the legacy of James Baldwin and his history within Washington, DC and to provide opportunities to connect with STC’s production of The Amen Corner both at Sidney Harman Hall and throughout the city.”

Timing is everything when it comes to theater. Either the play marches in lock step with the times or it unveils a shift in the culture that often only the artists see and ask people to bear witness to. The Amen Corner depicts a woman pastor, Margaret Anderson, which was provocative in the 1950s, at the helm of a congregation in Harlem who is wrestling with personal choices that sully the perception of her ability to lead. The play also emerges before the second wave of feminism, making it challenging, perhaps, for audiences to imagine a woman heading a church, and a Black woman, to boot.

Baldwin’s timing in 1955 appears to be premature, and Colbert believes had the play been staged “properly” as a family drama, it may have had more impact. When the play was staged on Broadway in 1965, the nation’s political climate had shifted toward civil rights. And the play was still “not a good fit in the mid-1960s when we are moving toward Black power and the different questions that are being asked about art, culture and politics,” states Colbert.

Tristan André Parks, who plays Brother Washington in the STC production of the play, believes that “for Jimmy [Baldwin] to use a Black woman in the 1950s, there’s a deeper conversation that he is having here. He asks of us to participate, to bear witness, to enter into the world of this Black leader, a woman.”

Colbert points out that throughout Baldwin’s nonfiction essays, he references his mother, Emma Berdis. This attention to his mother’s life and the social and economic strictures that confined it may have informed his construction of Margaret Anderson, emphasizing Colbert’s point that as much as this play is about leadership and the Christian church, it is ultimately a family drama.

There have been a handful of productions of the play in Washington, DC since 1955, including a 1983 musical adaptation at Ford’s Theater and the African Continuum Theatre Company’s 2002 production.

Perhaps the timing for the play is finally right. According to Colbert, the 1950s represented a fractured time in history similar to the fractured time we currently are experiencing, making the staging of The Amen Corner apropos for this historical moment.

What Parks wants us to recognize and remember is that “Jimmy’s play is a classic,” and this is one of the reasons why the STC has taken it on. Classics stand the test of time and weather the storms, and often wait for audiences to catch up.