The creative team of Jonathan Marc Sherman (book), Duncan Sheik (music and lyrics), and Amanda Green (lyrics) takes a look back at the sexual revolution of the ‘Swinging Sixties’ through the lens of two 30-something couples, each with a child and a mid-life crisis, navigating the era’s changing attitudes towards love, marriage, and commitment in The New Group’s world-premiere production of Bob & Carol & Ted & Alice, a musical rom-com based on the eponymous 1969 hit movie by Paul Mazursky and Larry Tucker, playing a limited run at The Pershing Square Signature Center.

Unfortunately, what was a hot topic with a timely message then, seems like little more than a grossly outdated and enervated period piece now, as the four titular friends experience the ennui of their successful but conventional lives amidst the encroaching hip culture of sexual liberation and experimentation, open-mindedness and open marriage, only to find that ‘free love’ comes at a cost. Not exactly a news flash, especially for anyone who has seen the publicity poster (for both the show and the original movie), which offers an unmitigated visual spoiler of the moralizing finale that can be read clearly in the situation, and on the faces, of the cast.

Scott Elliott nonetheless directs at a plodding pace through the familiar clichés to the foregone conclusion. There are long-winded group therapy sessions, trendy exercises in primal scream and tai chi, touchy-feely interactions that advocate feeling over thinking, including overly long segments with front-row audience members dragged into the performance; recurrent scenes of the characters taking articles of their clothing off and putting them back on; and a slow and deliberate delivery (wink, wink) of such old-time references as the defunct Pan Am airlines and the passé practice of allowing smoking on flights (after the characters have already been smoking, and filling the theater with smoke, throughout the show). All are intended to be funny, but are mostly just obvious, juvenile, and stilted.

The lethargic tempo is made even slower by shifts from the uninspired dialogue into forgettable songs that are more redundant than illuminating to the plot or characters (with the actors often walking over to sing or to play with the on-stage band), setting a drowsy tone that evokes some of the more downbeat pop groups of the 1960s (music direction by Jason Hart; music coordination by Antoine Silverman; musical staging/choreography by Kelly Devine). A highlight of the music, and the show, is Grammy Award-winner Suzanne Vega, who appears as the singing band leader and narrator, and in multiple voiceover roles of assorted figures espousing hilarious tidbits of idiotic pop psychology – a perfectly played perfect fit for her soft, smooth, hypnotic voice and calm, self-assured presence.

Jennifer Damiano, Joél Pérez, Ana Nogueira, and Michael Zegen star as the couples coming to terms with the social climate and sexual mores of California circa 1969. Damiano’s Carol and Pérez’s Bob lack any believable chemistry or thought process, jumping too quickly on the counter-culture bandwagon of extra-marital sex, pot smoking, and self-indulgence, easily accepting, and even loving, each other’s adolescent behavior. Nogueira and Zegen make for a more hesitant and conflicted Ted and Alice, laughably neurotic, distressed, and resistant to the new attitudes of Bob and Carol, until he isn’t, and she launches them all into the cathartic climax.

A period-style artistic design also contributes to the show’s lack of fluidity. Derek McLane’s set (with a beaded curtain backdrop, white plastic table and chairs, and velvet-cushioned metal-framed sectional sofa bed) and costumes by Jeff Mahshie (Ted’s increasingly wild and colorful attire, and the women’s vintage underwear, are especially notable) accurately recreate the look of the ‘60s, but require the cast to make frequent disruptive shifts, moving the furniture, making and unmaking the bed, and changing their clothes or partially disrobing (without being too revealing), which add more minutes to the already monotonous timing.

In general, the new musical adaptation of Bob & Carol & Ted & Alice presents nothing new or insightful, with hackneyed characterizations of the ‘60s that are not energetic enough to qualify as full-blown over-the-top parody, tedious staging and music that does nothing to advance the narrative but to lengthen it, and characters that aren’t likeable enough for us to care what happens to them or their marriages. It’s a “bittersweet comedy” that offers more disappointments than laughs. 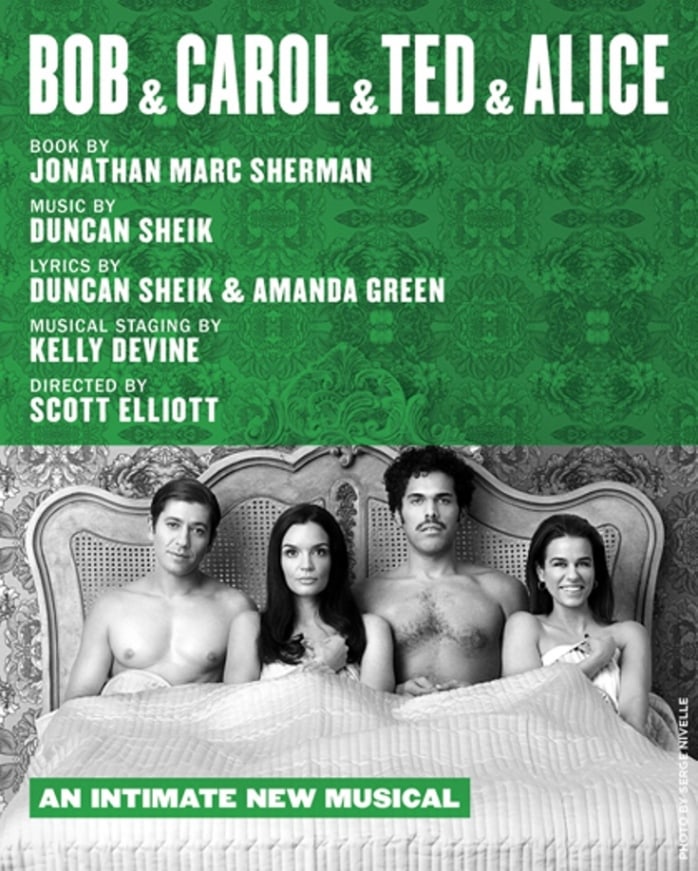