Shakespeare Theatre Company’s Artistic Director Simon Godwin announced the Company’s 2020/21 Season to a gathering of dedicated theatergoers at the Michael R. Klein Theatre at the Lansburgh on February 4, 2020. The upcoming season is one of “epic spectacles, classical masterpieces, and mighty collaborations,” explains Godwin. 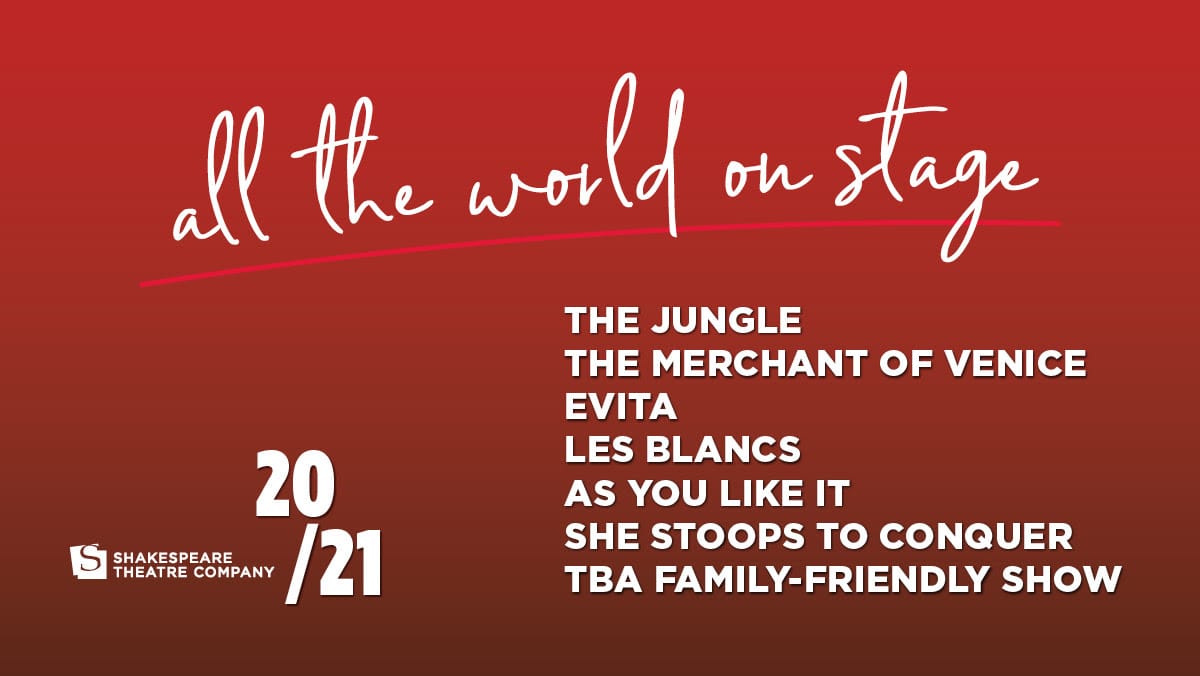 “Our motto for this season is, ‘All the world on stage,’ to paraphrase Shakespeare’s line. We will explore dynamic works set in Latin America, Africa and amongst refugees in Calais,” continues Godwin. “This selection of plays reflects our global consciousness.”

The season opens with a thrilling collaboration with Woolly Mammoth Theatre Company, in the first-ever partnership between the two DC stalwarts:The Jungle. Developed from interviews and stories of refugees by Joe Murphy and Joe Robertson of Good Chance Theatre, and directed by Stephen Daldry (An Inspector Calls, The Crown) and Justin Martin, this spectacular production will transform Sidney Harman Hall into a detailed recreation of the now-bulldozed refugee camp that sprang up in Calais in 2015.

In the Afghan Flag Café, which sat at the center of the camp’s complex, makeshift society, patrons will break bread and sip tea together while experiencing powerful accounts of conflict, community, and empathy. Earning 5-star reviews from Time Out London, The Sunday Times, and The Observer, the St. Ann’s Warehouse and Good Chance touring production of the Good Chance/Young Vic/National Theatre co-production The Jungle is not only DC’s most significant theatrical event of next year, but is also a one-of-a-kind opportunity to connect with stories at the center of a global crisis—a vital experience for DC audiences. Due to limited capacity, priority will be given to 2020/21 Season subscribers of STC or Woolly Mammoth Theatre Company.

For the holidays, Sidney Harman Hall will feature an exhilarating reimagining of Andrew Lloyd Webber and Tim Rice’s musical Evita. “This may be a surprising choice, at first, for a classical theatre company,” concedes Godwin. “But Evita has all the trappings of a modern history play: an ambitious upstart, a couple determined to grab the seat of power, a Chorus figure commenting on the action, crises of faith and purpose, and a revolution. It also features some of Webber and Rice’s most unforgettable songs.”

“We were so excited to bring James Baldwin’s The Amen Corner to Washington audiences this year, and next season, we welcome another great writer of the American canon to our stage: Lorraine Hansberry,” Godwin states. “In the tradition of Shakespeare Theatre Company’s dedication to rediscovering the hidden gems of theatre history, we are not staging A Raisin in the Sun, but reviving Les Blancs, a work left unfinished at Hansberry’s premature death, but lovingly completed by her husband. We are ecstatic to welcome back Yaël Farber (Salomé) for a reimagining of her epic production at the National Theatre that wowed audiences and critics alike.”

“We are bringing the best of the UK theatre to DC next year, but we are also committed to producing our own world-class productions,” states Godwin. “This includes three exhilarating new productions for the upcoming season of The Merchant of Venice, As You Like It, and She Stoops to Conquer.”

“The Merchant of Venice remains one of Shakespeare’s most problematic plays, depicting anti-Semitism, racism, and xenophobia,” states Godwin. “But it’s also a parable about justice and mercy, and thanks to Shakespeare’s unanswered, probing questions about humanity, community, belonging, and loss, every new production allows us to consider these themes in new and profound ways.”

Artistic Director Simon Godwin (Timon of Athens) will direct Shakespeare’s beloved and playful comedy As You Like It. Oliver Goldsmith’s charming She Stoops to Conquer, an
18th-century comedy of misplaced marriage plans, controlling parents, and nighttime hijinks, will be directed by STC’s Associate Artistic Director Alan Paul (Camelot, Peter Pan and Wendy).

Finally, after the success of last year’s world premiere of Peter Pan and Wendy, Shakespeare Theatre Company continues its commitment to programming that will delight theatergoers of all ages with a family-oriented play to be announced at a later date.

Subscriptions are on sale now. Packages and single tickets will be available for purchase this summer.

Performance dates for the season will be released in the coming weeks. All artists and titles are subject to change.