Chain Theatre’s world-premiere production of Chasing the River by Jean Dobie Giebel offers an intense, gripping, and momentous examination of the devastating trauma and ongoing repercussions of domestic violence and sexual abuse. The profoundly affecting drama, directed by Ella Jane New in its limited Off-Broadway engagement, was a finalist in the ATHE Excellence in Playwriting Awards and has already been optioned for TV – well-deserved recognition for an outstanding example of theater that can make a difference.

Following her release from prison and the death of her Aunt Adelaide, Kat, now 33, returns to her childhood home on the outskirts of small-town Pennsylvania to find closure and to decide what to do with the property that has been left to her and her younger runaway sister Beth. While there, she reconnects with her ex-boyfriend Sam, her estranged mother Margaret, and the agonizing past that continues to haunt her, as she struggles through the lingering effects of PTSD and tries to move on to a second chance for a happy life.

Told in the format of a memory play, the masterful staging employs voiceovers of crucial characters and re-enactments of indelible episodes from Kat’s childhood that flood her mind and unleash her still-raw emotions, while she wrestles with what happened and comes to terms with the people who were there through it all. The story also employs the running metaphor of a poker game (Aunt Addie’s favorite), including the show’s evocative title, which designates the final move made by a player who assumes she is behind and has little chance of winning.

Giebel’s psychologically insightful and sociologically astute script, with its natural everyday language, believable well-researched characters, and non-sequential revelations triggered by Kat’s visit, comes to life in emotionally expressive and empathetic performances by a superb cast of six, under New’s resonant well-paced direction. Together, they deliver the range of feelings and responses to the reality of familial abuse – anger, shame, anxiety, fear, guilt, blame, denial – and expose the dysfunction of a society and a legal system that further victimizes and penalizes those who suffered.

Christina Elise Perry fully embodies the role of Kat, as both an adult and an adolescent, manifesting all of her conflicting thoughts, muddled motivations, misplaced trust, and deep-seated pain, wanting to begin anew but tormented by flashbacks, attempting to make peace with her family and friends but bristling or exploding when they offer the same old implausible excuses – “I wasn’t sure,” “I didn’t know,” “Nobody knew,” “You were a good liar.” Her harrowing journey sends the message loud and clear: If you see something, do something; if you suspect something, say something.

Perry’s moving performance is potently supported by consistently convincing characterizations of the figures from her torturous past. David Wenzel as Nate is brutish and hateful, as he switches on a dime from attentive, complimentary, and contrite to vicious and violent, his ferocious abuse often fueled by his uncontrolled bouts of drunkenness. Robyne Parrish as Margaret is the epitome of the battered wife syndrome, remaining in an abusive marriage, putting her daughter in danger, turning a blind eye to her suffering, and then refusing to acknowledge her awareness of the situation or her own enabling complicity. As Beth, Caroline Orlando captures the sibling rivalry between the two young sisters (adopting a childish voice and demeanor in the memory sequences), as well as her desperate need to disappear, despite the impact it would have on Kat. The spirit of Aunt Addie, played with gusto by Sara Thigpen, is eccentric yet knowing, providing some bits of guidance and support, and a glimmer of hope for the future, when the chips are down. And David Rey turns in a masterful portrayal of Kat’s high-school boyfriend Sam, a complex and equivocal figure with personal problems of his own, who is both guarded and remorseful, but willing to do what he can now to try to make up for his inaction as a teen (though he, too, like the girls, was little more than a child at the time).

A simple but telling set design by Raye Levine Spielberg creates an atmosphere of disrepair and neglect, with a weather-beaten bottle-strewn front porch and screen door at the house where Kat grew up, and a dark outdoor entryway into the side yard through which the figures in her memories appear. The recurrent temporal shifts from now to then are signaled by changes in lighting (by Michael Abrams). Or, at times, the characters remain unseen, conjured only as the voices in Kat’s head (in a clear sound design by Greg Russ).

While the theme of familial abuse is horrific, it is also of paramount importance. Chasing the River presents a powerful examination of the issue, with personal perspectives on the unabated impact it has on everyone involved. It is a must-see show that is skillfully written, directed, designed, and performed, which brings heightened awareness to a domestic crisis that remains largely unreported. Kudos to Chain Theatre for shining a spotlight on it. 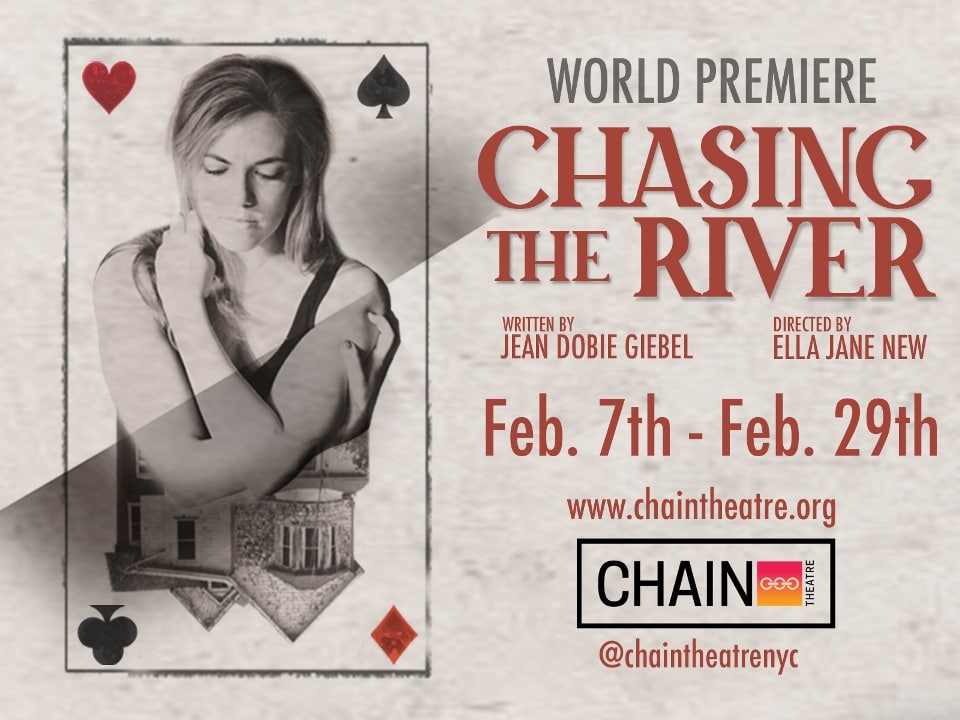