“I’m good at finding out the truth,” says Billy Argo (Spencer Coben), the boy-prodigy detective, near the beginning of this clever, quirky, and quite touching musical. So observant of clues is Billy that he solves case after case—à la Nancy Drew and the Hardy Boys—relying only on a magnifying glass, his prodigious powers of deduction, and his two crime-solving partners, buddy Fenton (Patrick Donoghue) and younger sister Caroline (Emma Wallach). But in his earnest search to solve a personal mystery that pains him deeply—why Caroline killed herself—Billy comes up against a harsh truth about adulting: Not everything is solvable and knowable. Or, as the script has it:

People can’t right every wrong.
…
Life’s most important riddles don’t have an answer.

The story is perfect for retelling by undergrads who themselves are about to face what’s incomprehensible and unachievable in the real world and after.

The Boy Detective Fails premiered at Signature Theatre in 2011 with book by Joe Meno, who based it on his fantasy novel of the same name, and music and lyrics by Adam Gwon. For its brief run at American University, the musical has had fresh, youthful life breathed into it by a likable student cast and an utterly charming production directed by Aaron Posner.

Scenic Designer April Joy Vester surrounds the action with wooden shelving containing a hodgepodge of mismatched lamps, props, and oddments—like an archive of evidence. The 16-member cast performs the opening number, which sets up Billy’s story, with such full-throated vivacity the show’s a grabber from the get-go.

In Billy’s quixotic quest for the answer to his sister’s suicide, he meets a showful of comic characters. Among them is the evil Professor Von Golum (Ally Baca), who was imprisoned for kidnapping a girl Caroline’s age, a case that Billy cracked. Another is the charlatan telemarketer Larry (Ross Bollinger), by whom Billy is briefly employed. And then there’s the cute kleptomaniac Penny Maple (Madison Green), with whom Billy falls in love. Throughout, Coben captures winningly Billy’s sincerity and awkwardness.

The music is pleasantly if conventionally show-tuney. (Musical Director Nathan Beary Blustein nimbly conducts a small orchestra from upstage of the shelves. The well-mic’ed solo and ensemble singing serves all the songs well, with standout vocals by Coben, Wallach, Baca, and Graciela Rey as Dale, another kid detective.) But it’s the witty lyrics that are most enjoyably edgy. They do not shy away from postadolescent existential angst, and the cast delivers them with delicious bite.

All the elements of stagecraft are excellent. Britta Joy Peterson has done choreography that is both eyecatching and character-driven. The lighting by Jason Arnold lends a lively theatricality to both the playing area and offstage. Sydney Moore costumes the cast in a smartly enhanced version of street clothes. And Neil McFadden’s sound design includes some amusing voiceovers.

Especially impressive is the fluid and inventive movement of the cast in the space. A song-and-dance solo might have a backup chorus “tapdancing” in sneakers. Or “set pieces” such as desks or a cave or a wall might be physically configured by the ensemble. Or an ingenue might dance with a man’s hat and jacket on a rolling coat rack. Or a complex scene change might be covered by an attention-holding long kiss. Throughout, the dramatic momentum seems driven as much by the characters and urgent storyline as by the actors’ bodies in ingenious motion.

The show hits anxious nerves familiar to anyone who remembers growing up and passing through the know-it-all phase:

It’s scary out there.
…
I’m afraid of everything.
…
Evil is all around.

To that age-appropriate agitation, the show offers a strangely assuring and enduring message:

There will always be mystery.
…
Some things we don’t ever get the answers to.
…
There’s no reason to be afraid of not knowing the answer to everything.

The Boy Detective Fails at American University succeeds charmingly as both entertainment and useful truth. 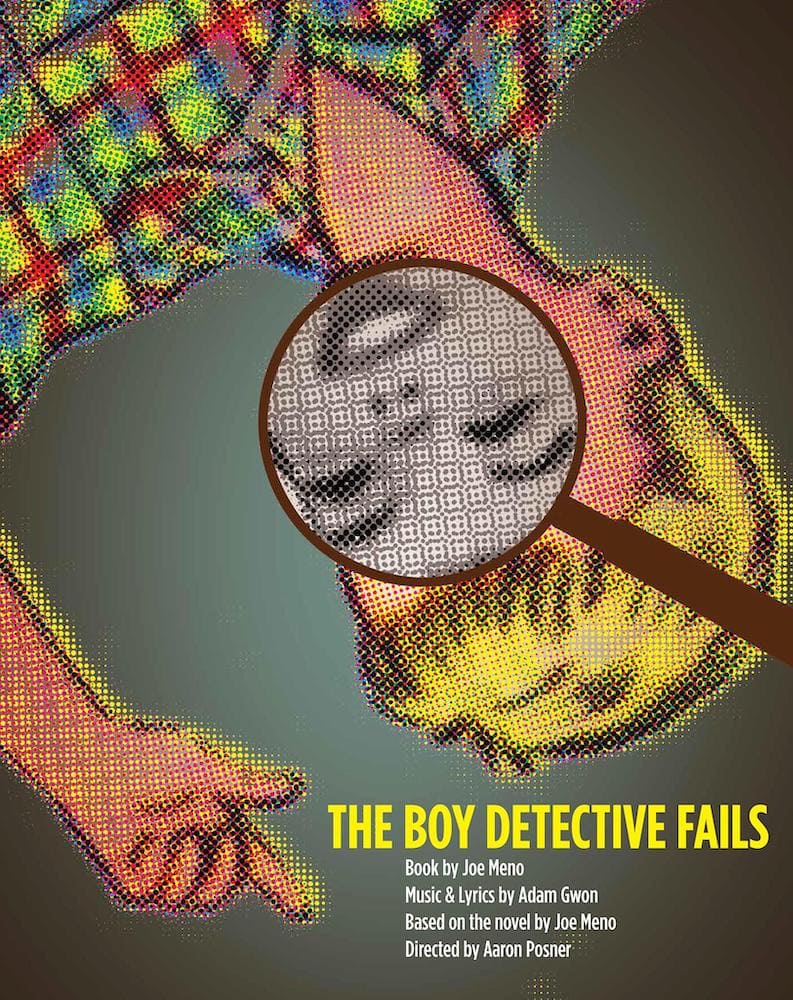