Following its premiere run of Ethan Lipton’s Tumacho in 2016, Clubbed Thumb (a resident company of Playwrights Horizons) is back with the Obie Award-winning writer’s commissioned Wild West parody for a limited engagement at the Connelly Theatre. Directed by Tony nominee Leigh Silverman, the show, with its over-the-top send-ups of traditional horse-opera clichés, offers escapist entertainment at its very silliest, which some might find juvenile, others a hoot (I’m one of the latter).

From the moment we enter the historic mid-1870s venue, we are transported back to an era of gunslingers and ghost stories, in a frontier outpost with a decimated population and blood flowing in the streets. The immersive scenic design by David Zinn features a lobby with a live cactus, oak-barrel tables, and murals of the glowing big sky. Inside the theater are bandana-draped balconies and wagon-wheel chandeliers, and a rustic wooden stage set that shifts easily from the local saloon to a glittering hacienda outside of town, accessed by sidesplitting puppet-box and stick-horse rides through the mountains (prop and puppet design by Raphael Mishler).

There’s admittedly nuthin’ high-falutin’ about Lipton’s script and songs, just a lot of wacky low-brow plays on the Western genre that will tickle your funny bone in spite of yourself. From toilet humor, speaking with a swollen tongue, and laugh-out-loud long takes to ghastly faux folklore, singing and dancing cacti, and a talking three-legged dog (well, actually . . .), the play with music is played for a spoofy good time by an ace-high cast of Broadway luminaries that is clearly having a hell-fired hog-killin’ ho down.

But there’s also some markedly current language and attitudes humorously mixed in with the familiar accents and lingo, along with a happy rib-tickling platitude about love and kindness (and having a hobby!) winning out over vengeance, and an updated take on Western gals, represented here by three strong female characters – so don’t expect to see any scantily-clad painted women in this one-horse town. What you will find is a priceless roster of burlesqued archetypes trying to come together to save themselves from the cold-hearted bloodthirsty villains of the present and past, who ultimately reveal their sad satirized backstories of what turned them bad.

Each member of the star-studded cast – John Ellison Conlee, Phillipa Soo, Andy Grotelueschen, Andrew Garman, Bill Buell, Randy Danson, Gibson Frazier, Layla Khoshnoudi, and Chinaza Uche – fully embraces the farce and, under Silverman’s controlled direction, delivers it with spot-on comic timing, never missing a goofy gag or an expressive glance. They are joined on stage by music director and musician Matthew Dean Marsh, who provides top-notch accompaniment on an old-fashioned upright piano, guitar, and banjo for their animated segments of Lipton’s songs (with additional music and arrangements by Ian M. Riggs), and supported throughout by striking lighting (by Jen Schriever) and sound (by Tyler Kieffer), and character-defining period-style costumes (by Anita Yavich and Devario D. Simmons), with one scene even played in old-time long-john underwear that looks like it came straight out of a 19th-century Sears mail-order catalogue.

Tumacho is a too-funny take-down of the too-macho Western, so be sure to mosey on down to the Connelly Theatre to catch Clubbed Thumb’s ridiculously entertaining remount. 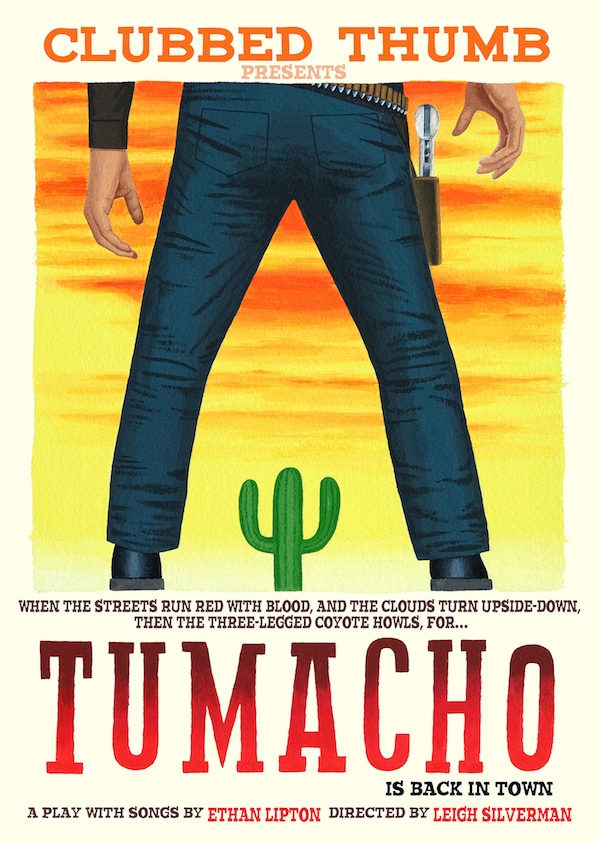