Composer, lyricist, librettist, actor, singer, musician – Erik Ransom does it all, and does it all so famously that the New York-based artist was awarded last year’s Off West End (Offie) Award for Best New Musical in London, for Above the Stag’s acclaimed production of his hit GRINDR: The Opera. The “unauthorized parody” of the popular gay dating app enjoyed a sold-out run, revival, and extension in 2019, and now the original London cast recording has just been released this month for download.

Since the phenomenal success of his award-winning show, with regional US productions in Miami, Chicago, and Wilmington, DE, Ransom made his highly anticipated return to the Off-Broadway stage in TOSOS’ Leaving the Blues at The Flea Theater in January. He was also nominated, along with German colleague Thomas Zaufke, by the LA STAGE Alliance for an Ovation Award in the category of Best Lyrics/Composition, for their work on Florian Klein’s Shooting Star. And every month in New York, he hosts a table read of the classics with The Dead Playwrights’ Society, which he founded.

To celebrate the release of the GRINDR album, Erik spent a fun-filled fifteen minutes taking our pop-quiz interview on his pop-culture tastes and themes.

Erik: The grandeur. High art and high camp can make for an opulent marriage, and one I’ve often sought to arrange. Opera was my area of study in younger days and I noticed it bore a few similarities to Grindr, which I was hoping to highlight. They’re both hyperbolized worlds, though in one you’ll find exaggerations about emotional journeys and in the other you’ll find exaggerations about the size of sex organs. In either setting you’re liable to see a pearl necklace or two.

I haven’t been on the app in a while, but unless they’ve added a category for medieval history enthusiasts, I doubt it. Oh wait – I think they did! Geeks. I relate to the geek category.

The pedant in me believes language is little more than a series of labels, but I certainly understand why people are averse to being pigeonholed. Unless that’s some sort of kink they’re seeking on Grindr, then more power to them!

Grandeur. I consider myself a modern epicist, and I like to give even the most mundane, everyday activities a bit of majesty. After all, crossing 42nd Street during rush hour often feels like The Battle of Five Armies.

Drizly. Like Grindr, it has a GPS-based system where you can find someone nearby to fill that void in your life. In Drizly’s case that person delivers you liquor.

Wherefore should one need choose betwixt the two?
I’faith I do prefer to blend the twain!

This is becoming a theme, but grandeur. I love to walk the storied streets of that ancient city, which was the seat of an empire with such fascinating history. Given the warm reception my work received, I was pleased to learn my love was not unrequited.

The feudal hierarchy, the staggering income inequality between the ruling and peasant classes, the constant threat of plague? It’s hard to be a Millennial. At least the Elizabethans had the concept of noblesse oblige. Fortunately, theatre gives me the opportunity to dance between space and time.

I know it’s cliché to deify the Bard of Avon, but there’s just no comparison to William Shakespeare. He wrote with so many layers of depth and such a dirty mind he puts GRINDR: The Opera to shame.

Believe it or not, I didn’t name Quilliam ShakeSpeare. That was my boyfriend Scott’s idea. I merely approved with great enthusiasm.

Both! There is no feeling like inhabiting a world you yourself created. If I had to choose one it would probably be writing. Fortunately I don’t have to make the narcissist’s answer to Sophie’s Choice, because ich kann nicht wählen!

Major governments around the world uniting to answer the existential threat of climate change with the appropriate level of alarm; that the newly released Grindr cast album is a smash hit; and enough Chopin potato vodka to cope if the first two don’t come true!

If the album sales go well, I’ll be sure to let you know!

Thanks, Erik, for sharing a fabulous fifteen minutes with us! Wishing you continued fame and success with GRINDR: The Opera and all of your upcoming endeavors. 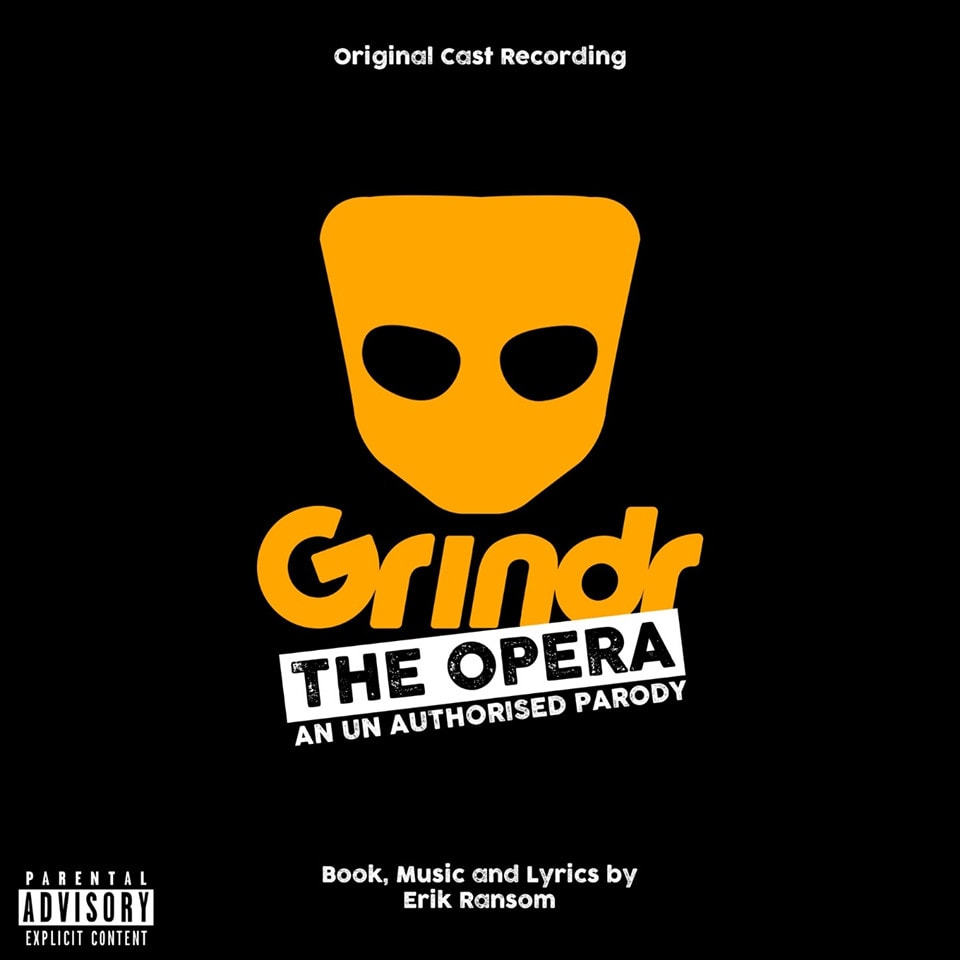 The original London cast recording of GRINDR: The Opera is available online on iTunes, Google Play, and CD Baby.