1st Stage, a vibrant professional company in Tysons, Virginia, recently announced their dynamic 2020-2021 season. This 13-year-old organization has grown from a grassroots collective of local artists to an award-winning institution with national recognition. Though programming changes have been necessitated by a prolonged closure, the company is dedicated to moving forward. Their new season shows their renewed focus on great scripts, fantastic roles, and thought-provoking performances, courtesy of the artists that are the heart and soul of their Virginia community. 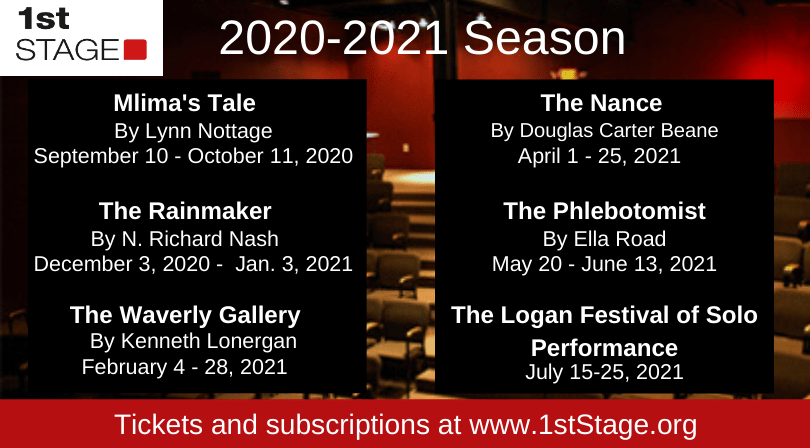 1st Stage will begin performances in September with Mlima’s Tale by Lynn Nottage, directed by José Carrasquillo. Nottage, a Pulitzer Prize Winner and Macarthur “Genius” Grant Winner, gives us the story of Mlima, an elderly “big tusker” elephant from a protected reserve in Kenya. The production has been praised in The New York Times for its “theatrical inventiveness and discipline.”

In December, Deidra LaWan Starnes directs the beloved romantic classic The Rainmaker, by N. Richard Nash. The story follows the Curry family as they love each other in the midst of the Great Depression. The New York Daily Mirror called it “a hit you must see.”

February 2021 features The Waverly Gallery, written by Kenneth Lonergan and directed by Alex Levy. This 2019 Tony Award nominee (for Best Revival of a Play) features Gladys, the elderly matriarch of the Green family. Though she was always irascible, she is now increasingly erratic, and a cause for concern to her family. “Deeply theatrical and often deeply funny,” raved The New York Times.

In April, Nick Olcott directs The Nance, by Douglas Carter Beane. This witty, Tony Award–nominated play, filled with music, dance, and comedy sketches, introduces us to Chauncey Miles, a gay burlesque performer at the Irving Place Theater. The Nance is a “funny but bittersweet portrait of a vanished era” according to The Chicago Tribune.

May features a look into the potential future with The Phlebotomist, by Ella Road, and directed by Alex Levy. In a sci-fi-inspired world where genomics are the norm, every person gets assigned a “rating” at birth based on their genetic map. The Guardian celebrated the production as “…a racy dystopian thriller that is part Black Mirror, and part Brave New World.”

1st Stage is an award-winning professional theatre in the heart of Tysons, Virginia. The company serves as a cultural hub for the community producing first-rate theatrical productions, and hosts professional musicians, orchestras, and visual artists. In 2020, 1st Stage was nominated for 18 Helen Hayes Awards, including Outstanding Production of a Play (The Brothers Size). Other awards include the American Theatre Wing National Theatre Company award. Last year, the company won five Helen Hayes Awards, including for Outstanding Production of a Musical (Fly By Night). In September 2016, The Wall Street Journal called 1st Stage “one of America’s most impressive smaller regional companies.” For more information, visit 1st Stage online or follow the theater on Facebook, Twitter, and Instagram.

Tax-deductible contributions can be made at the 1st Stage website.