Borders, a play by Nimrod Danishman, tells the story of two young men—Boaz (Eli Schoenfeld), an Israeli, and George (Adrian Rifat), who is Lebanese—who meet on Grindr and fall in love despite their home nations’ mutual enmity.

Borders explores the complexities of virtual relationships, Arab-Israeli cultural tensions, queer identity in the Middle East; and as if that weren’t enough, it is now also a play about coronavirus.

This is not because anything pandemic-related appears in the script. Rather, in the age of social distancing, Dirty Laundry Theatre in New York is live-streaming Borders on YouTube for anyone with a link to enjoy. So, in addition to the weighty questions already proposed by Danishman, we the quarantined viewers now have another one on our hands: does this show, or any show, work in a virtual livestream format?

The answer is: sort of. Borders was obviously written to be performed in a live theater setting. In fact Dirty Laundry Theatre has done the play onstage already, in the 2019 New York Summer Theatre Festival, where it received a Best Play nomination. The company planned to remount the play for a run this year April through June and had begun previews when COVID-19 hit and the show had to shut down. Rather than postpone, or call the whole thing off, the company created an ingenious virtual adaptation to be livestreamed in real time directly from the actors’ homes, with no pre-shot footage except in transitions between scenes.

As a virtual experience, the production lacks the intimacy and immediacy of a live performance. And since this piece is a two-hander completely dependent on the emotional honesty of the relationship and the subtle (mis)communication between the two men, intimacy is an important quality to retain. (Borders has been announced for live performance next year in DC by Mosaic Theater Company , where I have no doubt it will follow in that company’s tradition of excellence.)

On the other hand, Borders is unique in that the piece, as written, is entirely centered around digital communication—chats on Grindr. George and Boaz never meet in person or speak on the phone. Director Michael Piazza wisely positions their blue and orange chat balloons smack dab in the middle of the screen. The left and right thirds of the screen show the two actors, shot in motion by their own hands from their own apartments.

Indeed, one of the most satisfying aspects of virtual Borders is its verisimilitude with the actual Grindr experience. Who among us has not lain in our beds, heads stuffed into pillows, eyes glued to that black-backgrounded screen awaiting the dreaded chirp of a new message?

In an era when artists of all stripes, but especially live performers, are struggling, there is a certain desperation to find some way of doing virtual theater that is as satisfying as the real thing. This may be an impossible task. But the team at Dirty Laundry Theatre proves that there are a lot of creative weapons in theater artists’ arsenals that can create work that is interesting in its own right.

Borders presented by Dirty Laundry Theatre will be broadcast in real time via livestream at 2 pm ET Sunday, May 10 and May 17, and at 9 pm ET Saturday, May 9 and 16, 2020. To watch, go online a few minutes before showtime. There is no charge.

Donations to Dirty Laundry Theatre’s GoFundMe campaign can be made here. 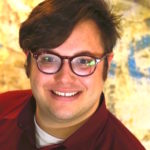 Michael Poandl is a critic, improviser, and playwright from Washington, D.C. He has directed at the Kennedy Center Page-to-Stage Festival, the Women’s Voices Theater Festival, and the Capital Fringe Festival. He studied performance at American University. He currently resides in Asheville, North Carolina, and works for an HIV/AIDS nonprofit organization.