In the face of global crisis and economic uncertainty, Mosaic Theater Company of DC draws inspiration for its new season from a nucleus of towering yet under-appreciated figures in history. These Activist Witnesses responded to calamity in a way that left a lasting imprint, while transmitting their legacy to new generations. Mosaic’s Season 6 will open and close with World Premieres about these 20th Century icons, who were caught in times of war, rampant fever, border conflict, and the global refugee crisis.

“More than at any time in our theater’s history,” notes Mosaic Founding Artistic Director Ari Roth, “we are turning to eye-witnesses who have starkly illuminated the vivid nature of what ails us and what must be done to bend the moral arc of history toward justice and healing.” These figures include Polish underground resistance fighter Jan Karski, world-traveling Jamaican care provider Mary Seacole, murdered Civil Rights icon Emmett Till, his mother Mamie Till-Mobley, and NAACP field reporter Medgar Evers, and a bevy of American authors who helped define mid-20th Century thinking: Gore Vidal, William F. Buckley Jr., James Baldwin, Norman Mailer, and Ayn Rand. They join a trio of fictional couples grappling with historic conflict—including a professor and student debating the role of slaves in America’s Revolutionary War, internet suitors navigating the neverending Arab-Israeli conflict, and a Western photographer capturing the Syrian refugee crisis in a single, indelible image.

“With all the massive disruption being experienced,” Roth reflects, “Mosaic is sustained by the pull of these new works we’ve been enmeshed with while planning our future. There’s been an intense relationship with each of these challenging, provocative, resonant plays. These works, written by kickass contemporary female authors and compelling and groundbreaking men, are all excavating new aspects of a terrain that has been a part of our landscape since our founding. They compel us to look within, and summon courage to confront the self and society…and change accordingly.”

The titles in Mosaic’s Season 6 are Inherit the Windbag, a World Premiere by Alexandra Petri (August 19 – September 20, 2020); Remember This: The Lesson of Jan Karski featuring Academy Award nominee David Strathairn, co-written by Derek Goldman and Clark Young (October 20 – November 1, 2020); The Niceties by Eleanor Burgess (November 11 – December 13, 2020); Borders, two plays in one evening navigating zones of conflict and longing by Nimrod Danishman and Henry Naylor (January 20 – February 21, 2021, part of Mosaic’s Voices From a Changing Middle East Festival); Marys Seacole by Jackie Sibblies Drury (March 24 – May 2, 2021); and the World Premiere staging of The Till Trilogy, three plays by Ifa Bayeza (June 10 – August 22, 2021). All productions will be staged at the Atlas Performing Arts Center in NE Washington D.C. Dates and titles are still subject to change based on the unfolding public health situation. 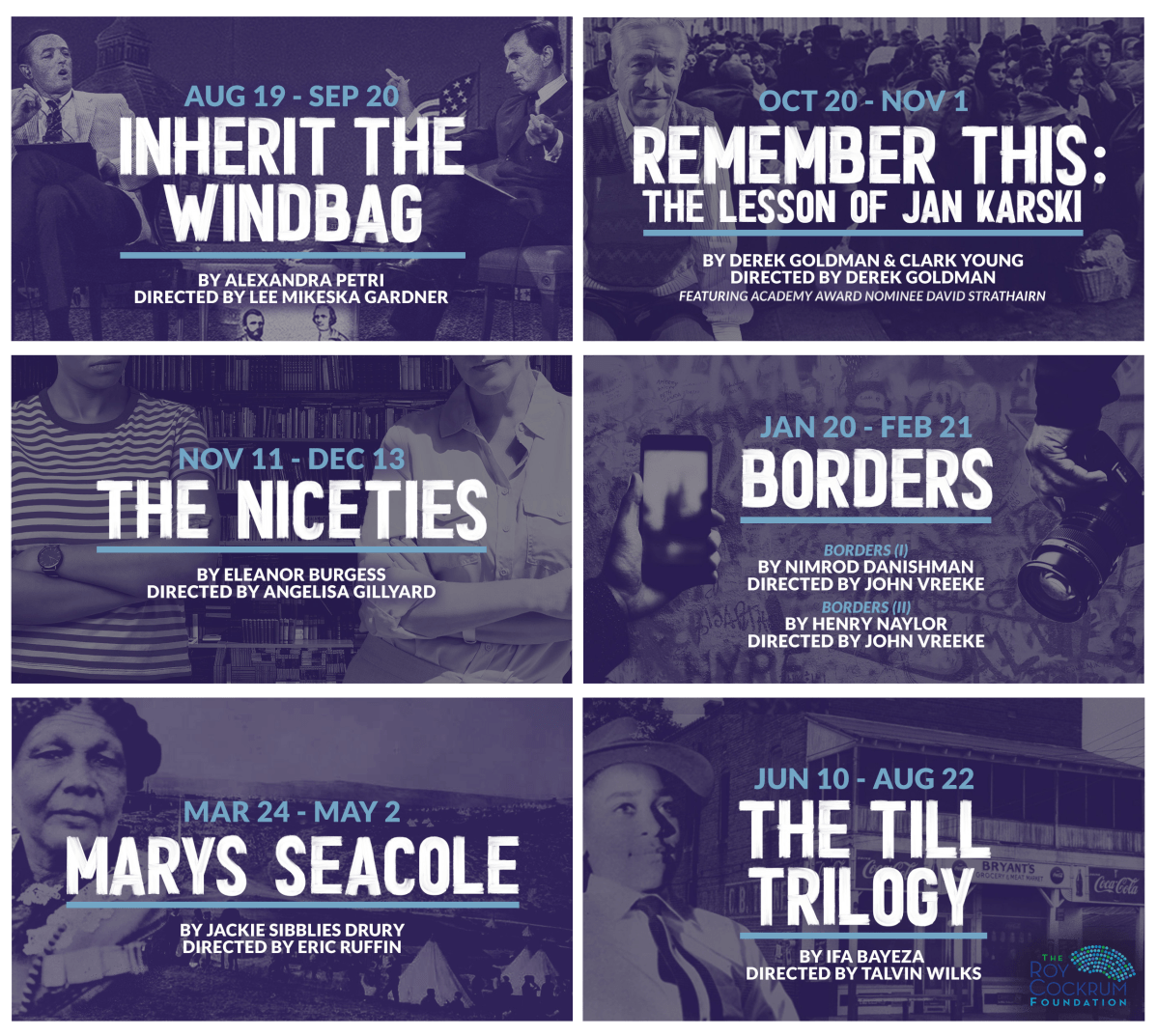 WaPo humorist Alexandra Petri’s pitched battle of bloviating wits revisits the televised Republican and Democratic Conventions of 1968 and the blistering nightly free-for-all between conservative pundit William F. Buckley Jr. and liberal author Gore Vidal. What ensues is a battle for history itself, in a no-holds-barred sesquipedalian brawl about another time when American politics was spinning toward entropy. A protean cast of Demons bring the likes of Norman Mailer, Ayn Rand, James Baldwin, and Truman Capote back to shine bright light on these preening wordsmiths, wounded warriors on the battlefield of extreme partisanship.

Remember This: The Lesson of Jan Karski – October 20 – November 1, 2020
World Premiere Limited Run by Derek Goldman and Clark Young
Directed by Derek Goldman and Featuring Academy Award Nominee David Strathairn in collaboration with The Laboratory for Global Performance and Politics at Georgetown University

Academy Award nominee David Strathairn (Lincoln, Good Night and Good Luck) brings to life the harrowing journey of a courier for the Polish Underground who volunteers at great personal risk to carry an eyewitness report of the destruction of the Jewish people of Poland to the Free World. In a solo tour-de-force performance, we meet the first of our season’s towering Activist Witnesses: a whistleblower who reports his outrage to world leaders when none will listen. From the unimaginable despair of the Warsaw Ghetto and Nazi camps to the Oval Office, Remember This reveals the complex life of a witness, spy, diplomat, hero, and Georgetown University professor who overcame overwhelming odds to “shake the conscience of the world.” Christiane Amanpour, CNN: “I can’t imagine a better time, not just because of the 75th anniversary of the liberation of Auschwitz, but also because of the world we live in, for you to be playing and portraying this amazing man… and the unbelievable superhuman courage he showed to bear witness.”

At an elite East Coast university, Zoe, an ambitious Black student, and Janine, her esteemed white professor, debate Zoe’s essay on the role of slaves in the American Revolution, pivoting from grammar and Google to race and reputation as they face stunning implications that can’t be undone. Both women are liberal; both feminists, both brilliant; but before they know it, they’re in dangerous territory neither of them has foreseen. Now in our post-COVID climate, the play takes on new timeliness as an Old Order teeters and an undergraduate threatens to consign her mentor to the dustbin of history. Peter Marks of The Washington Post hailed The Niceties as “a barnburner of a play,” adding that it’s “one of the best plays I’ve seen about who gets to tell the story of America, and how.”

A Grindr chat forms a relationship that crosses cultures, politics, wars and a technological landscape of screens, texts, emojis, and GIFs, as the tension of an imminent meeting between George from Lebanon and Boaz from Israel collides with intensifying skirmishes along Israel’s northern border. Sixteen virtual conversations without commitment in a liminal area on the border transform a dividing line between two countries into a meeting point. “A fine debut in its modest emotional honesty”—Haaretz

Sebastian, a once-celebrated British war photographer whose audience with Osama bin Laden prior to 9/11 shaped his career, is visited by a nameless, pregnant Syrian refugee struggling to stay afloat on a failing fishing boat in the Mediterranean and must decide whether to rescue her, or his career. Inspired by encounters with recent refugees, Borders is an urgent, occasionally hilarious, always moving commentary on one of the great crises of our time. One of the biggest hits of the 2018 Edinburgh Festival, the play accumulated 19 five- and four-star reviews and the Carol Tambor Best of Edinburgh Award before North American performances at the Spoleto Festival and New York Theatre Workshop. “A profound reminder of the power of art and culture” —Evening Standard

With additional Voices From a Changing Middle East Festival programming, including:

I, Dareen T
By Einat Weizman, based on the Life and Incarceration of Dareen Tatour
A Voices Festival Off-Night Chamber Production: February 1–21, 2021

Arrested for a poem she’s written and posted on YouTube, Palestinian poet Dareen Tatour shares her story with Israeli author and actress Einat Weizman (Shame 2.0), recalling a childhood of trauma, resistance, finding voice, and solidarity in friendship, and finally, liberation.

My Brief Affair with the Minister
By Ari Roth | Directed by John Vreeke
A Voices Festival Workshop Reading: February 8 and 15, 2021

An artistic director chronicles the attempt to bring an audacious cross-cultural collaboration to the stage. It doesn’t go as hoped. A provocative showdown between two admired Israeli/Palestinian artists and their arch-rival censor in the Israeli government fails to make it out of a fraught rehearsal room. In losing artistic control, the author begins to get a sense of what’s revealed amid the wreckage.

The latest work from the Pulitzer Prize–winning author of Fairview celebrates the complex legacy of caregiving and frontline nursing on the battlefield of trauma, crisis, and war. Mary Seacole, an ambitious Jamaican woman determined to live a grand life of service, traverses oceans and eras as she and her descendants contend with layers of racial disparity and inequity when considering who gets treatment first in times of crisis, and who is left to console whom. More than any play this season, Marys Seacole speaks to the selfless, life-affirming spirit evinced during our current global crisis. “A breathless and radiant new play!”—Ben Brantley, NY Times

The now legendary story of Emmett “Bo” Till remains one of the most pivotal incidents of the 20th Century and is believed to have launched the modern Civil Rights Movement. This landmark undertaking brings to life the vividness of Emmett’s voice and spirit, the richness of his world, the tragedy of his brutal death, the miscarriage of justice in the trial of his murderers, and the indelible impact of his legacy on those left behind.

This world premiere recreates the 1955 trial in The State of Mississippi vs. Roy Bryant and J.W. Milam for the Murder of Emmett Till, with scenes beyond the courtroom involving local and national investigative Black press who were the real heroes uncovering crucial facts in the landmark case. Drawn from courtroom transcript, contemporaneous news accounts, government records, and field reports of a young Medgar Evers of the NAACP, Summer in Sumner condenses the five-day trial into a kaleidiscopic, compact drama.

The thrilling, intimate conclusion to this epic trilogy examines the home life of Emmett’s accuser and the eventual recantation of much of Caroline Bryant’s testimony. Benevolence then visits the neighboring town of Glendora, Mississippi, and follows the combustible relationship of a local Black couple, Clinton and Beulah Melton, whose lives are at risk because of the information they possess.

The Roy Cockrum Foundation enables theaters to reach beyond their normal scope of activities and undertake ambitious and creative productions. It awards major grants to support world-class performing arts projects in not-for-profit professional theaters throughout the United States of America.

Mosaic Theater Company of DC is committed to making transformational, socially relevant art, producing plays by authors on the front lines of conflict zones, and building a fusion community to address some of the most pressing issues of our times. Dedicated to making our theater a model of diversity and inclusion at every strata, on stage and off, Mosaic invests in the new as they keep abreast of changing and challenging times. They ensure that theater is a responsive gathering space while nurturing and producing art of the highest order. Mosaic is utilizing the resources provided by the City to begin formulating reopening strategies. Their first priority will be the safety and health of everyone involved—audience, staff, artists, and crew. When the time comes, Mosaic will announce creative, comprehensive measures to safely deliver their signature brand of artistry and essential cultural engagement. They have also upgraded their website to make information about Mosaic’s safety measures, productions, and public programming easier to access.

Tax-deductible contributions can be made on the Mosaic website.