Following its successful world-premiere run in 2015, live on stage in Denmark’s Fredericia Teater, Bleeding Love is now available on digital platforms to a worldwide audience in a new three-part audio version by the Broadway Podcast Network (BPN). The post-apocalyptic musical, with book by Jason Schafer, music by Arthur Lafrentz Bacon, and lyrics and direction Harris Doran, features an all-star cast of Broadway veterans who bring their expressive voices to the Goth-flavored story, extolling the regenerative powers of love, the arts, and the beauty of nature.

The original work was suggested to Schafer by Oscar Wilde’s “The Nightingale and the Rose,” a didactic children’s fairytale published in 1888, with a theme of love and death in a self-sacrificing quest to help find an elusive red rose for a despondent suitor. Recorded by the cast members in their own apartments during the first two weeks of the coronavirus quarantine in New York, the podcast demonstrates the high professional caliber that characterizes the audio offerings of the BPN, an established specialist in digital programming.

Schafer’s updated futuristic narrative follows Bronwyn, an innocent teenage cellist who falls hard for Puppy, the rebellious punk next door, spotted through the window of the apartment where she lives with her eccentric over-protective Aunt Floy. But Puppy has an unhealthy attachment to the emotionally abusive Lolli, who demands that he bring her a red rose. And Bronwyn is the object of the unrequited affection of the nerdy Sweet William, whose father, the building’s tough gun-toting Super, keeps the dead roof garden under lock and key, while the population at large remains isolated at home, in a deteriorating dystopian world where it’s too dangerous to venture outside. Until . . .

Sarah Stiles provides the sweet young voice and heartfelt vocals for the lead role of Bronwyn, who proves that one caring and determined young artist can, at all costs, change the future. Also perfectly cast as the idiosyncratic personalities – sometimes funny, sometimes scary, sometimes moving, and always engaging – are Annie Golden as Aunt Floy, Rebecca Naomi Jones as Lolli, Marc Kudisch as The Super, Taylor Trensch as Sweet William, and Tony Vincent as Puppy. The blockbuster singing, distinctive deliveries, and individual characterizations by the well-known actors bring the quirky figures to life and enable listeners to envision them in our mind’s eye.

So, too, do the descriptive writing and lyrics, with vivid language and ardent feelings that help us to visualize the desperate situation and setting in which the characters live. Their songs run the musical gamut from stirring romantic ballads to angry rock diatribes, all brimming with emotion and backed by a seven-piece band featuring Steffen Schackinger on guitar, Florian Navarro on reeds, Jakob Rosendahl Povisen on violin, Tobias Lautrup on cello, Allan Nagel on bass, Lars Mollenberg on drums, and musical director Martin Konge on keyboards (song recordings produced by Søren Møller of the Fredericia Teater and engineered by Brian Montgomery, with orchestrations by Tony Award-winner Bruce Coughlin, and sound mixing and design by Emmy award-winner Ric Schnupp).

The talented team and technical quality of Bleeding Love are outstanding, the story is compelling and resonant, and its darkly positive message of hope and revitalization are most welcome in these trying times of COVID-19 and self-isolation. If you’re a fan of youth-oriented rock musical fairytales, be sure to tune in. If you aren’t yet, you just might become one. 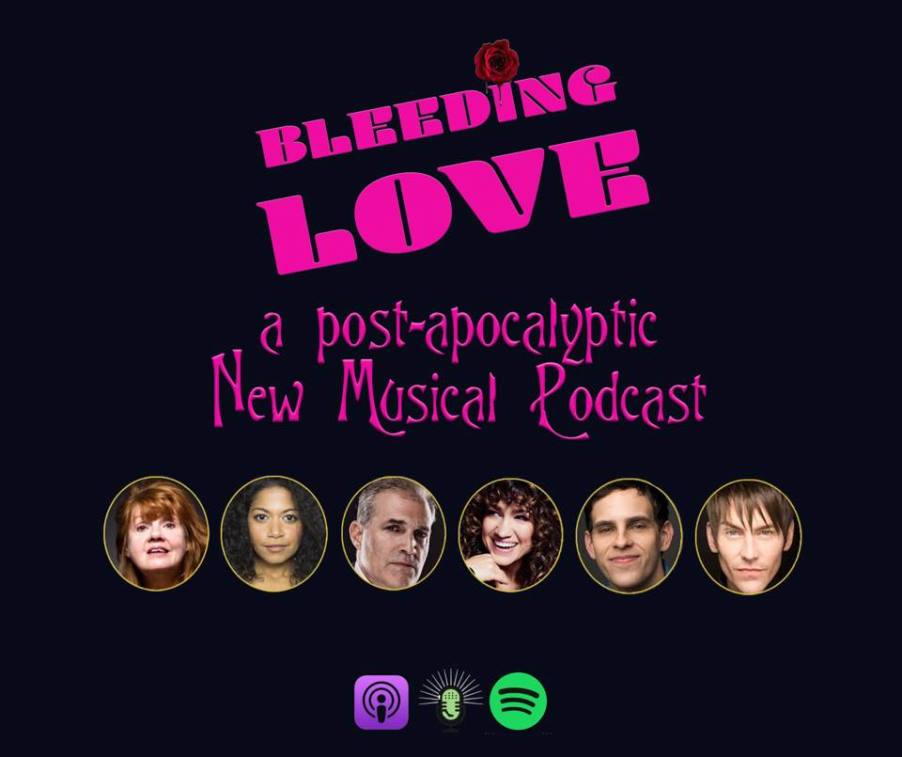 Bleeding Love is available through the Broadway Podcast Network. To listen, go online.