Though the sea of online content is deep at the moment, that’s not stopping Adventure Theatre MTC. They are diving right in with a full lineup of API Heritage Month storytimes, interviews, and digital presentations during the month of May. These online events honor the creativity, tradition, and innovation of the Asian Pacific Islander population, and focus on the impact they continue to make through their art. 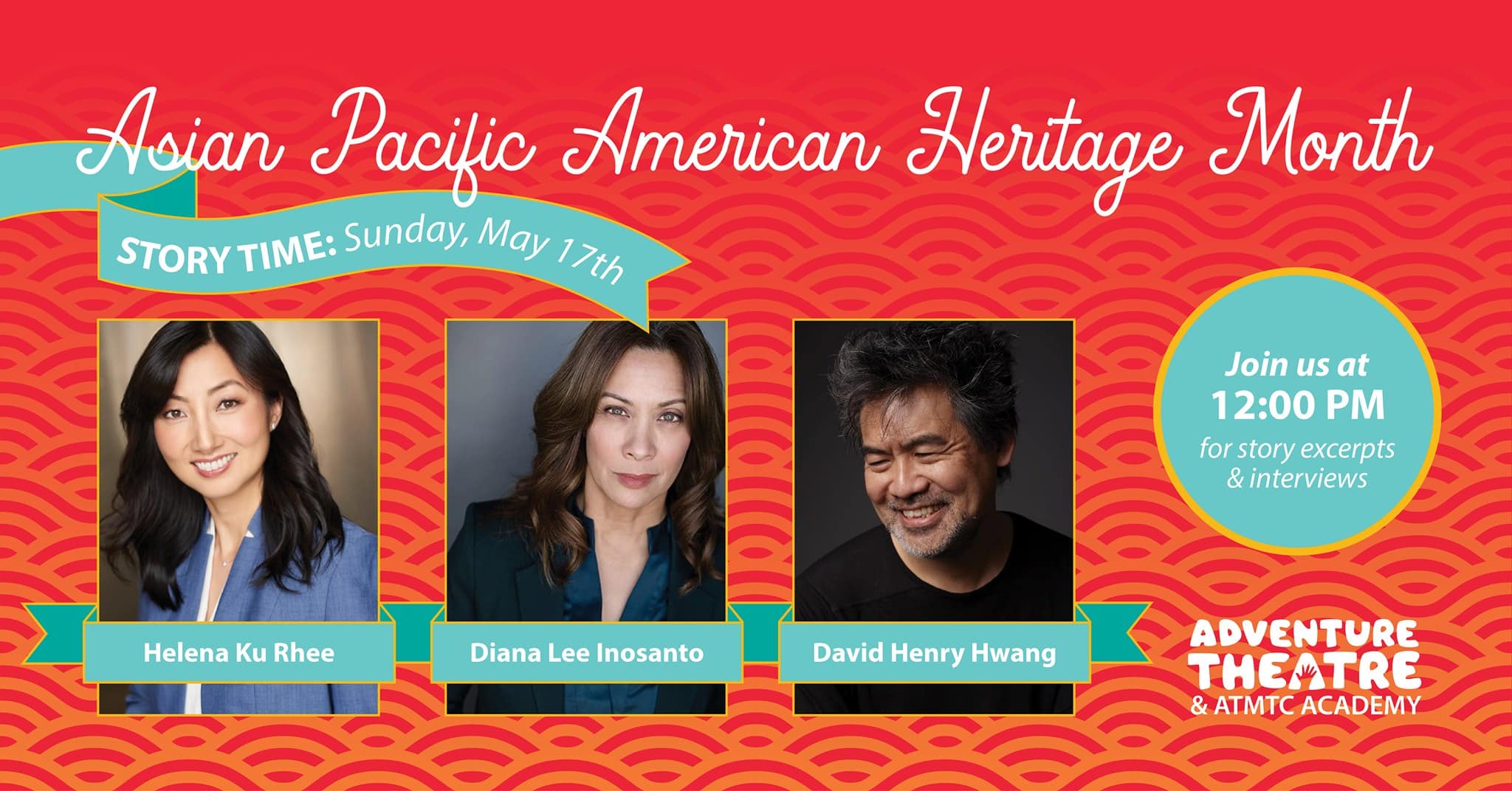 Executive Director Leon Seemann, Education Director Margo Brenner Collins, and Artistic Director Chil Kong are excited about this lineup, which will bring out the rich cultural history of Asian Americans and Pacific Islanders and bring to light contemporary artists who are adding to our society’s history. Kong says of the series, “The contribution of these authors and playwrights is immense for the next generation of artists, and it’s my honor and privilege to spend time learning, and sharing their wisdom.” The programming will start at noon on May 17, 24, and 31, 2020, and will stream on the ATMTC facebook event page. Full program details are below.

On May 17 at 12 PM EST, Artistic Director Chil Kong will interview the writer of one of his favorite books of 2020—Paper Kingdom written by Helena Ku Rhee. The book focuses on an office that becomes a fantastical kingdom of paper at night, complete with friendly dragons. Paper Kingdom is on the Spring 2020 Inspired Recommendations list by the American Booksellers Association, and listed on the Most Anticipated Children’s Books of 2020 by BookPage.

On May 17 at 1 PM EST, Artistic Director Chil Kong interviews longtime friend and teacher Diana Inosantos about her journey to understand her son’s autism. Diana Lee Inosanto is the daughter of martial artist Dan Inosanto and the god-daughter of the late Bruce Lee. As an American actress, producer, director, writer, and former stuntwoman, she has made a path through the Hollywood system that is unique from other performers in the entertainment industry. She has most recently written for TYA audiences with her new book The Curious Mind of Sebastian.

On May 17 at 2 PM EST, in a conversation moderated by Artistic Director Chil Kong, the celebrated Tony and OBIE award–winning playwright David Henry Hwang will discuss his playwriting career, his writing process, and his inspirations with local API playwrights. Hwang is probably best known for his Tony Award–winning play M. Butterfly (1988), based on the true story of a French diplomat’s long affair with a singer in the Beijing opera.

On May 24 at 12 PM EST, ATMTC will feature a discussion with Vicky Fang, a product designer who spent five years designing kids’ technology experiences for both Google and Intel. Through inspiring and empowering kids in coding and technology, she came to recognize the gap in education and inspiration, particularly for girls and minorities. She began writing books to provide kids with accessible STEM-inspired stories that they can read again and again, learning from characters they love.

On May 24 at 1 PM EST, Greg Pak, a Korean American filmmaker and comic book writer best known for his award-winning feature film Robot Stories, will read his book The Princess Who Saves Herself. Pak is known for his blockbuster comic book series Planet Hulk and World War Hulk, and his current work on his comic book series Ronin Island and Mech Cadet Yu, creator-owned series from BOOM! Studios; Firefly for BOOM! Studios; Agents of Atlas and Star Wars: Darth Vader for Marvel; and Stranger Things: Zombie Boys for Dark Horse.

On May 24 at 2 PM EST, ATMTC offers a sneak peek of its 2021–2022 world premiere musical, Fantastagirl and Math Monster. Written by Tori Boutin and Madeline Belknap and directed by Jennifer Knight, this production stars Valeria Morales, Tyasia Velines, Ayesis Clay, Desiree Velez, Linda Bard, Bekah Umansky, and Rebecca Kiser. Fantastagirl is an everyday superhero who is forced to face her ultimate weakness, math. Could a sidekick be her super solution to her math problem? With a little help from her moms and an overeager Math Monster, she just might defeat the mortal enemy, her own anxiety.

On May 31 at 1 PM EST, local chocolatier and children’s book author Ginger Park reads from a beloved book that she coauthored with her sister, Frances Park. Together, they have written five children’s books including The Have a Good Day Cafe, Where On Earth Is My Bagel?, My Freedom Trip, The Royal Bee, and Good-bye, 382 Shin Dang Dong.

On May 31 at 2 PM EST, ATMTC will offer a sneak peek at a potential show for the 2020–2021 season, The Dance and the Railroad, which was originally commissioned as a Theatre for Young Audiences play in 1982. The play by David Henry Hwang rejects the stereotype of submissive immigrant laborers and depicts assertive men who demanded their rights despite great personal risk.

Please stay in touch by checking the Adventure Theatre website, or email info@adventuretheatre-mtc.org with questions.

Adventure Theatre MTC is the pre-eminent musical theater academy for youth in the DC region with an integrated and nationally renowned professional theater for family audiences. They celebrate the glorious richness of our world by cultivating Equity, Diversity, and Inclusivity as they inspire the creativity that nurtures great art, artists, and audiences. They believe in the ongoing process of acquiring knowledge and developing skills through theater experience, training, and study. ATMTC believes that a supportive, safe and encouraging environment must be present to assure the integrity and success of our institution, programs, and members of our community.

Tax-deductible contributions can be made on the Adventure Theatre MTC website.