To continue this year’s milestone celebration of Stephen Sondheim’s 90th birthday, Off-Broadway’s The Sheen Center is teaming up with Poetry in America – a new series produced by Verse Video Education, presented by Boston’s WGBH, and airing nationally on free PBS channels – for a co-presentation of ‘Finishing the Hat.’ The half-hour episode, livestreaming on Friday, June 12, at 3 pm, will feature a discussion of the lyrics of the eponymous song, along with performances of that and two others from Sondheim’s award-winning Broadway musical Sunday in the Park with George. 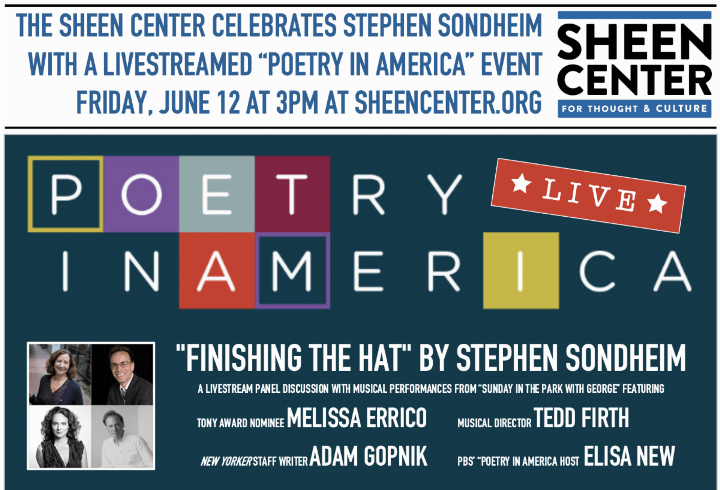 Director, creator, and host Elisa New (the Powell M. Cabot Professor of American Literature at Harvard University) will be joined for the show by a distinguished panel of three special guests. Together virtually (while observing social distancing in each of their own homes), they will offer viewers an in-depth experience of hearing, exploring, and interpreting the signature work about creating art, framed in the context of the life of 19th-century Pointillist painter Georges Seurat.

Tony Award-nominated actress, singer, and recording artist Melissa Errico – who was personally selected by Sondheim to star as Dot in The Kennedy Center’s 2013 production of the musical – released her critically acclaimed album Sondheim Sublime on Ghostlight Records in 2019, following multiple sold-out engagements of her touring concert in the US and England. She will be accompanied by New York-based musical director, arranger, and pianist Tedd Firth, and Adam Gopnik, author and staff writer for The New Yorker, will also bring his expertise to the conversation.

Friday’s presentation is one of many being streamed by The Sheen Center during the current closure of theaters to combat COVID-19. In addition to stand-alone special events like “Finishing the Hat,” The Sheen offers a vibrant mix of theater, film, music, art, and talks in its recently launched “Faith, Hope and Love” digital series. Those include “Feel Good Fridays,” featuring uplifting performances by global musicians and singers in a variety of genres. For more information about upcoming programming, go online.