With DMV theaters still shuttered because of COVID-19, there has been the opportunity to explore original streaming content written by local playwrights. One of those playwrights is Northern Virginia emerging playwright Soo-Jin Lee. I first met Lee in February 2017 before a staged reading of her play The Men My Mother Loved at MetroStage.

The Men My Mother Loved was an intriguing “what if” type play with this premise: “What if after 33 years your mother looks up old boyfriends in Korea?”—certainly not a topic often explored on DMV mainstages. In an interview Lee told me this about the topic of the play: “For those new to Korean culture, I wanted to provide insight into the Korean experience. For those who have lived it, I want them to feel proud and represented.”

Another of Lee’s plays, Peaches, was to have received a fully staged reading this spring as part of a celebration of Asian and Asian-American women’s voices called FemFest Houston. Peaches was to be produced as a partnership of Houston’s Mildred’s Umbrella Theater Company and the Asia Society Texas Center.

However, as Lee told me, the COVID-19 pandemic changed everything. “The pandemic happened and the theater changed plans and decided to record a Zoom reading and air that online for a week for the public to see.” So I took advantage of the opportunity to take in Peaches. It was an opportunity I would not have had if the reading was done live in Houston.

I thoroughly enjoyed Peaches, it streams for free through June 10.

What is Peaches about? The location is Northern Virginia. Two Korean American best friends in their mid-20s, Ji Hae (a delightfully expressive, quite charming Hannah Lee) and Robert (Alan Kim with a comic’s timing that can turn into a blast of hurt masculinity), discover secrets about each other. Surprising secrets since the two have been best friends since childhood. Best friends but without benefits it seems. It is the last day of summer as they are preparing to attend a wedding as guests. Over the course of the play, the two open up about their lives, including how white privilege has affected them as Korean Americans. The bittersweet play ends with a peach pie as a centerpiece with both Robert and Ji Hae in the midst of their personal struggles. Struggles that seem all too real.

Lee has a fine, clear-eyed way with conversational dialogue. As the play progresses, the dialogue takes on a rich, raw, fearless attitude as it digs deeply into cultural issues rarely depicted on DMV-area stages, including the “yellow fever” mindset of some white males and the complexities of interracial relationships. Peaches is a play in which the characters speak to their Korean American backgrounds as well as being two characters just trying to figure out what is next in their lives and their so-far seemingly chaste relationship. 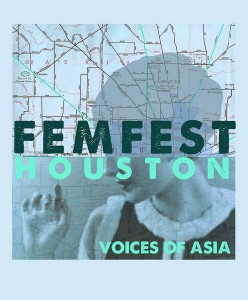 Soo-Jin Lee wrote Peaches some years ago while she was studying at the Edward Albee playwriting workshop at University of Houston. She was mentored by Lanford Wilson. Peaches is her earliest work. It was the winner of the New Works for Young Women Prize. Since then she has penned plays including Why Koreans Don’t Hug.

Peaches is drawn from Lee’s own earlier life in Northern Virginia. It delves into fascinating issues such as interracial relationships and how parents influence their children. And the “yellow fever” mindset of white males. In the play Lee has her characters freely discuss interracial relationships. Lee holds nothing back for an audience to ponder. She accomplished something she had mentioned to me, “I write to move and entertain people.

Under the meticulous direction of Peter Ton—and with the skilled work of video editor Elizabeth Nguyen, music by Andy McWillaism, sound effects by Francisco Araiza, and Gabriel Regojo providing stage directions—the Zoom reading of Peaches is an affecting two-hander and an introduction to a most forthright playwright: Soo-Jin Lee.

If the name Soo-Jin Lee is not known to you. Here is her bio: Her plays include Peaches (winner of New Works for Young Women Prize, 2007), Tigers, Dragons, & Other Wise Tails!, Why Koreans Don’t Hug, and The Men My Mother Loved. Her work has been presented and produced at Mildred’s Umbrella, Discovery Theater, George Mason University, University of Houston, University of Texas at Austin, and University of Wisconsin-Milwaukee. Born in South Korea and raised in Virginia, Lee earned her M.F.A. from the University of Texas at Austin. She currently lives and teaches high school English in Northern Virginia.

Running Time: 45 minutes with no intermission, followed by a 15-minute interview with the playwright.

Peaches is available for free screening through June 10, 2020. For information click here. Registration is required and available free online. (You will receive a video link and a password.)