For its first installment in this month’s primetime series of Pride Plays, commemorating the 50th anniversary of New York’s Gay Pride Parade with livestreams of four significant LGBTQIA+ works, Playbill, in partnership with the Pride Plays Festival, is presenting Donja R. Love’s one in two on Friday, June 12, at 7 pm. The inventively powerful absurdist three-hander, which celebrated its world premiere with The New Group at The Pershing Square Signature Center last November, considers the mindboggling statistic that one out of every two queer Black men will become infected with HIV/AIDS in the ongoing epidemic.

Playbill’s virtual presentation – a benefit performance for Broadway Cares/Equity Fights AIDS – reunites the original cast of Jamyl Dobson, Leland Fowler, and Edward Mawere, who, in the full-stage production, were called on to play any one of the roles as determined by the audience at the beginning of each performance. The meta-theatrical device underscores the real-life uncertainty of which of the three would be “the one” and which of the other two would be next.

Jamyl was kind enough to speak with me about the play and its all-too-timely theme, at the historic intersection of the coronavirus pandemic, Pride, and #BlackLivesMatter, while preparing for the remote streaming this week.

Why is it important for this work to be included in the milestone Pride month events?

Jamyl: I think it’s great for this story about some queer Black men, gay men of color, to be seen in a primetime spot, because during the Off-Broadway run, audiences would often ask in the post-show talkbacks, “Is this really true?” People mostly assume that AIDS/HIV infection ended in the 1980s or ‘90s, but it didn’t. So to be able to reach so many through Playbill’s large online audience, beyond the 200-seat Off-Broadway house, is extremely powerful and impactful.

What does is mean to you personally to be a part of it?

Ever since I first saw Sugar in Our Wounds, I have wanted to work with Donja Love, because he puts a focus on the lives of Black and queer people – people who aren’t usually given a voice – in a beautiful way. He’s the griot of our times. The piece itself (one in two) is a very personal one; we all know someone directly impacted by this virus. So for me to play these men, who are not a device, but are fully realized people with complex stories, is so important and inspiring.

How will the presentation on Friday differ from the stage production?

It’s virtual, and done remotely from our homes. Because of that, I was afraid it would lose the intimacy it had in the theater. But we’re leaning in, treating it almost like film acting. I didn’t understand how some of the scenes would be done, but we rehearsed, and we were happy with it; we all actually said, “That really worked!” So I’m excited for people to see it. As in the theater, we still don’t know which roles we’re playing – it will still be decided by audience participation, online. Viewers will choose who plays what role, and the decision will be sent to us by stage management.

Is there one character or one line from the play that resonates most with you?

I love all of the characters, but the line that affects me the most is, “It’s because I look the way I do; my story isn’t important because I don’t look like I could’ve been in The Normal Heart or Angels in A-fucking-merica.” For me, that captures the essence of the piece, which is: Why don’t people know about this? Or don’t they even care?

What impact do you hope the reading will have on viewers, and on society at large?

I hope the livestream audience will get the same feeling and understand the same mission that we had Off-Broadway, not just to think that “This is a lovely event.” I want them to see that we’re now facing three major pandemics: COVID-19; systemic racism; and HIV/AIDS. I also hope that people hold space for those who are different from them. And I absolutely hope that we can make the necessary changes, and that everyone will vote, Vote, VOTE!!!

Many thanks, Jamyl, for taking the time to give us your perspective on this momentous play; I look forward to seeing it again. 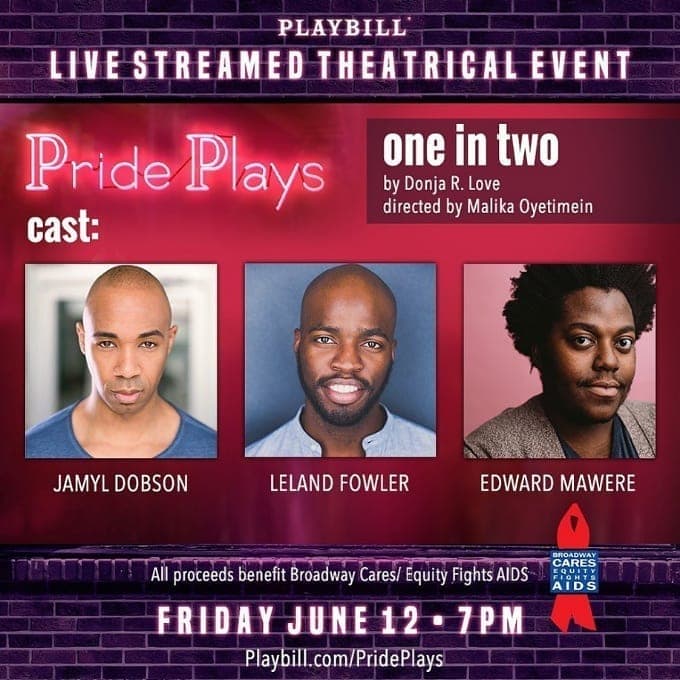 one in two livestreams on Friday, June 12, 7 pm, on Playbill’s Pride Plays, and will be available for viewing through Monday, June 15. To watch, go online.