Last seen on the New York stage in her critically-acclaimed performance in the award-nominated supernatural coming-of-age comedy Our Dear Dead Drug Lord at Off-Broadway’s WP Theater, Alyssa May Gold, who made her Broadway debut in the 2011 Tony-nominated revival of Arcadia, will be returning, as soon as possible, in MTC’s Broadway premiere of How I Learned to Drive by Paula Vogel. The postponed show, which has been rescheduled for the upcoming 2021 season, was well into rehearsals on March 12, when the coronavirus shutdown occurred.

With a multi-disciplinary Bachelor’s degree from the NYU Gallatin School of Individualized Study and a Master’s in Classical Acting from the London Academy of Music & Dramatic Art, Gold has put her prestigious training to good use, in her contemporary interpretations of such classics as Julius Caesar, The Maid’s Tragedy, and Juliet + Romeo with Pocket Universe, the New York-based theater and film production company that she founded in 2017. Among her other memorable theatrical roles was her empathetic portrayal of a traumatized runaway bride in the Art of Warr production of Brilliant Traces at The WorkShop Theater.

In addition to her work on the stage, Gold’s screen credits include the 2002 Warner Brothers film Divine Secrets of the Ya-Ya Sisterhood, with which she launched the first of her ongoing 15 minutes of fame, and appearances on the popular TV series The Marvelous Mrs. Maisel on Amazon and NBC’s Law & Order: SVU. 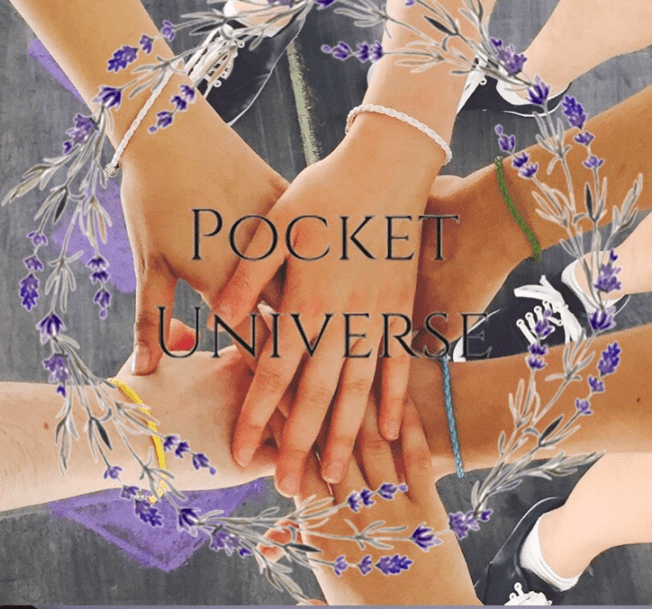 Alyssa has been keeping busy during this unexpected hiatus with virtual gatherings and book discussions through her new digital initiative Pocket Universe Survival Club, but, luckily for us, found some time to take our Pop quiz and to share her thoughts and perspectives on her career.

Alyssa: Yes! I believe in physics – energy can’t be created or destroyed, it can only be transformed, so I believe in ghosts as people’s transformed energy after they have left their bodies. It’s all still here, swirling around us, and I think you can attract or repel it, like any other energy.

Only the pink/blue/sparkly-gold one in Our Dear Dead Drug Lord, designed and handmade by our – no big deal! – Lucille Lortel Award-nominated set designer Yu-Hsuan Chen!

Emily Roebling, who was responsible for completing the construction of the Brooklyn Bridge (my favorite place in NYC) after her husband, its chief engineer and the son of its designer, got sick. She wasn’t an engineer, but she had been closely following the construction process and knew she could figure it out. I took a lot of inspiration from her in setting out as a producer and starting Pocket Universe. I’d love to take a walk across the Brooklyn Bridge with her and thank her for the literal and metaphorical path she paved.

Being a teenager is so hard; you don’t understand why you’re feeling what you’re feeling, you feel like nobody around you understands what you’re feeling, and it can be so isolating. Playing a high school student feels like reaching a hand out to teenagers in the audience, or to adults who haven’t healed from some teenage trauma, and showing them that they aren’t alone, because I’m – hopefully – reflecting their experience back to them.

Tapping into their impulsiveness without placing judgement or commentary on it. You just have to engage honestly with their moment-to-moment actions and not try to communicate your own opinions about whether they’re right or not. But that is also what makes it fun.

Hermione Granger [from J.K. Rowling’s Harry Potter series]. She was bossy AND had friends. She taught me that books and cleverness were nothing without friendship and bravery.

My mom officially taught me the summer before my junior year of high school so I could get my license when I turned seventeen, but when I was little she would let me sit on her lap and help steer while she parked the car. It’s haunting, doing that last scene in How I Learned to Drive, because I know first-hand the excitement and joy of getting to almost-drive, and for L’il Bit, it was turned into something so traumatic.

There are different, but equally exciting, visual and experiential possibilities with each, so I think it depends on what works best for the story. I do love the ritual of theater, though – it feels special and sacred, guiding people through an experience in real time. It’s a collective effort every night between everyone onstage, backstage, and in the audience to suspend our disbelief, to go somewhere else, and to come back to real life a little bit different.

Shakespeare. Actually, I’d like to conjure him, too. I want to believe if he could see his legacy he would be thrilled that his plays have continued to help us examine the human condition for centuries and absolutely horrified that we decided Romeo and Juliet is the “greatest love story of all time.” I’d like to ask him about it and get some answers.

I love that there is nothing casual about a classical play; the stakes are epically high, and the poetry allows you to connect to them and to reinterpret them in so many ways. Whitney White, who directed Our Dear Dead Drug Lord, has been doing this incredible series of concerts from the perspective of different female characters. I saw the one she did about Emilia from Othello and her combination of Shakespeare’s text, her own text, and original rock music let me experience the story and understand the character in a much more immediate visceral way. I love that these plays leave the door open for that kind of exploration.

Emma, in People, Places, & Things by Duncan Macmillan. She’s the only character I can think of who stands in for the universal human experience but is written as a woman; you could have anyone play her and it would work. There are things expressed through that character about being alive, being in denial, being at war with the darkest parts of yourself, and the journey to be at peace, that I had never understood before. I learned so much about myself watching it and would love to facilitate that experience for other people.

The pictures my sister sends me every day of her dog Penny, who is so incredibly done with having to share her apartment all day. You can follow her on Instagram and laugh with me!

I love voluntary solitude and spontaneous socializing. So basically the opposite of what is happening right now with the coronavirus pandemic.

Hugging my parents and doing How I Learned to Drive on Broadway. I can’t think of a better play to welcome people back to the theater. It’s such an emotionally epic, cathartic, and, ultimately, hopeful story that deals with resilience in the face of trauma and, as Paula so eloquently describes it, “the gifts we receive from people who harm us.” I’m so proud to be part of telling that story and cannot wait to share it!

It was great to touch base with you, Alyssa; thank you for a fabulous fifteen minutes! I look forward to seeing you back on Broadway as soon as theaters get the green light to reopen.