Even though it’s remote, you can still keep your connection to the theater strong with a diverse selection of virtual offerings this weekend. From livestream concerts, original cast readings, and conversations with Broadway stars to videos of new song releases and previously recorded full-stage performances, there’s something for everyone. In addition to my top picks for Friday, June 12, of “Finishing the Hat” at 3 pm, and one in two at 7 (both of which I wrote about earlier, in separate features), the following choices represent a range of works to watch, to contemplate, and to enjoy. 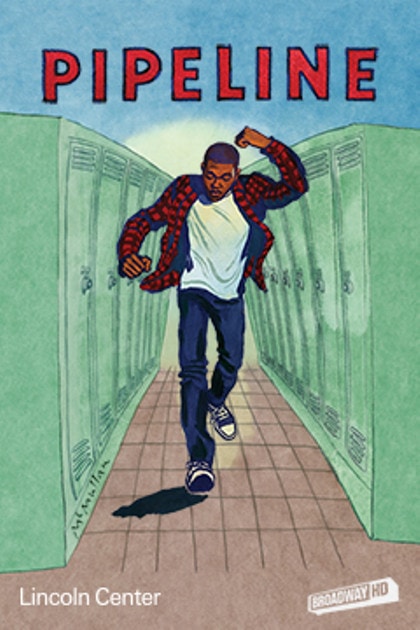 Pipeline – In solidary with #BlackLivesMatter, Broadway HD – a digital subscription service offering streamed recordings of live performances – is placing its 2018 release of Dominique Morisseau’s Pipeline above its paywall, for everyone to stream for free, with or without a subscription. The story of Nya, a Black inner-city high-school teacher with concerns about her teenage son, Omari, following a controversial incident at his upstate private school, played at Lincoln Center’s Mitzi E. Newhouse Theater in 2017, where it was directed by Lileana Blain-Cruz and recorded as part of the Live from Lincoln Center series. In lieu of a fee, the founders of Broadway HD encourage viewers to make voluntary donations, as they have done, to Color of Change, NAACP Legal Defense Fund, and Southern Poverty Law Center. To watch the timely 87-minute drama, go online.

“The New World” – Mexican-born and New York-based musician, composer, arranger, and music director Jaime Lozano – one of five artists selected for the 2020 Joe’s Pub Working Group residency at The Public Theater – just released a vibrant new video this month of his bilingual all-Latino version of the titular number from Jason Robert Brown’s 1995 theatrical song cycle Songs for a New World. Featuring remote performances (mixed by Demián Cantú and edited by Elaine Del Valle) of vocals by Andréa Burns, Danny Boléro, Genny Lis Padilla, Natalie Toro, and Cedric Leiba Jr., with Jesús Altamira on piano, Randy Landau on bass, and Dayron Cartas on percussion, the song’s themes of arrival, departure, life’s choices, and “the moment of decision” hold personal meaning for Lozano (who wrote the Spanish lyrics), as a member of the American immigrant community. He noted that “This show changed my life when I learned about it” in 2005, as a young musical-theater director and composer in his native hometown of Monterrey. Tune in to see “The New World” on YouTube, or click on the video above. 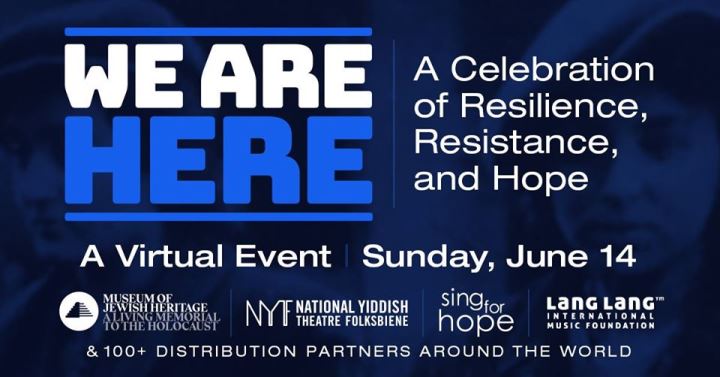 We Are Here: A Celebration of Resilience, Resistance, and Hope – Four leading NYC-based institutions – the Museum of Jewish Heritage – A Living Memorial to the Holocaust, National Yiddish Theatre Folksbiene, Sing for Hope, and Lang Lang International Music Foundation – have enlisted a global network of more than 100 organizations from 26 states and countries to come together for a special program to foster the fight for social justice and fundamental human rights. The free 90-minute livestream concert event commemorates the 75th anniversary of the end of World War II and the 77th anniversary of the Warsaw Ghetto Uprising, in which 13,000 Jews died fighting Nazi oppression in April and May of 1943, and also speaks to the present time of rising antisemitism and systemic racism. A roster of renowned actors, musicians, singers, and civic leaders are scheduled to participate, including Mayim Bialik, Renée Fleming, Whoopi Goldberg, Billy Joel, Lea Salonga, Jelani Remy, Lauren Ambrose, Steven Skybell, Elmore James, Dr. Ruth Westheimer, Jackie Hoffman, Lang Lang, and many others. We Are Here will livestream on Sunday, June 14, at 2 pm EST; to view, click here. 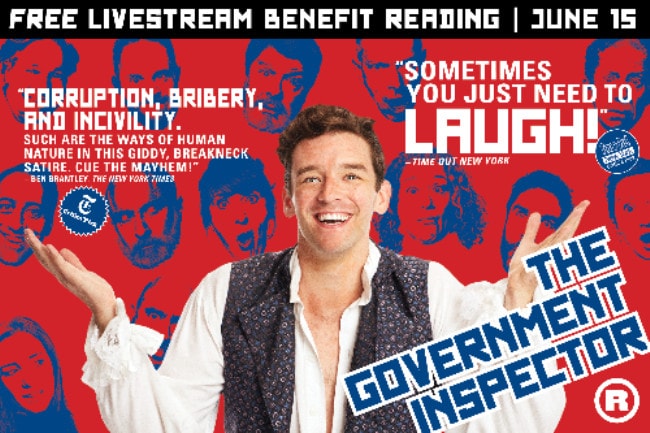 The Government Inspector – Off-Broadway’s Red Bull Theater, with a mission of revitalizing rarely seen classics for a current audience, continues its series of free livestream reunion readings with the original cast of its acclaimed 2017 production of Jeffrey Hatcher’s The Government Inspector, adapted from Nikolai Gogol’s 1836 Russian satire of political corruption, human stupidity, and self-delusion. Directed by Red Bull’s Founding Artistic Director Jesse Berger, multiple award-winning actor Michael Urie leads the hilarious company (including Arnie Burton, Stephen DeRosa, Michael McGrath, and Mary Testa), all Zooming in from their own socially-distanced locations. The virtual reading will be enhanced with original music by Greg Pliska, and design elements provided by Alexis Distler and Tilly Grimes, the show’s original set and costume designers. You can watch the broadcast of The Government Inspector on Red Bull Theater’s website, Facebook page, Vimeo, or YouTube channel on Monday, June 15, at 7:30pm, and you are invited to make a tax-deductible donation, to help the non-profit organization stay connected and continue its digital programming during the ongoing COVID-19 shutdown of live theater.