Spooky Action Theater’s livestreamed New Works in Action play-reading series continues  Sunday, June 14, at 3 pm with Circular by Laura Shamas. Her heritage includes Chickasaw, English, French, Irish, Lebanese, and Scottish and who has an intense interest in mythology. “For me,” Shamas says in the interview that follows, “mythology is a roadmap to navigating the human condition in the contemporary world.”

In Circular, a young army psychiatrist becomes entangled in the world of The Odyssey on her first tour of duty in Afghanistan. On Circe’s island, this combat doctor and her commanding officer must face off against the known and unknown, modern and ancient monsters, determined to leave no one behind.

“With Circular,” the playwright says, “I’m trying to bring focus to a female perspective to the issue of PTSD, and the archetypal concept of eternal war.” 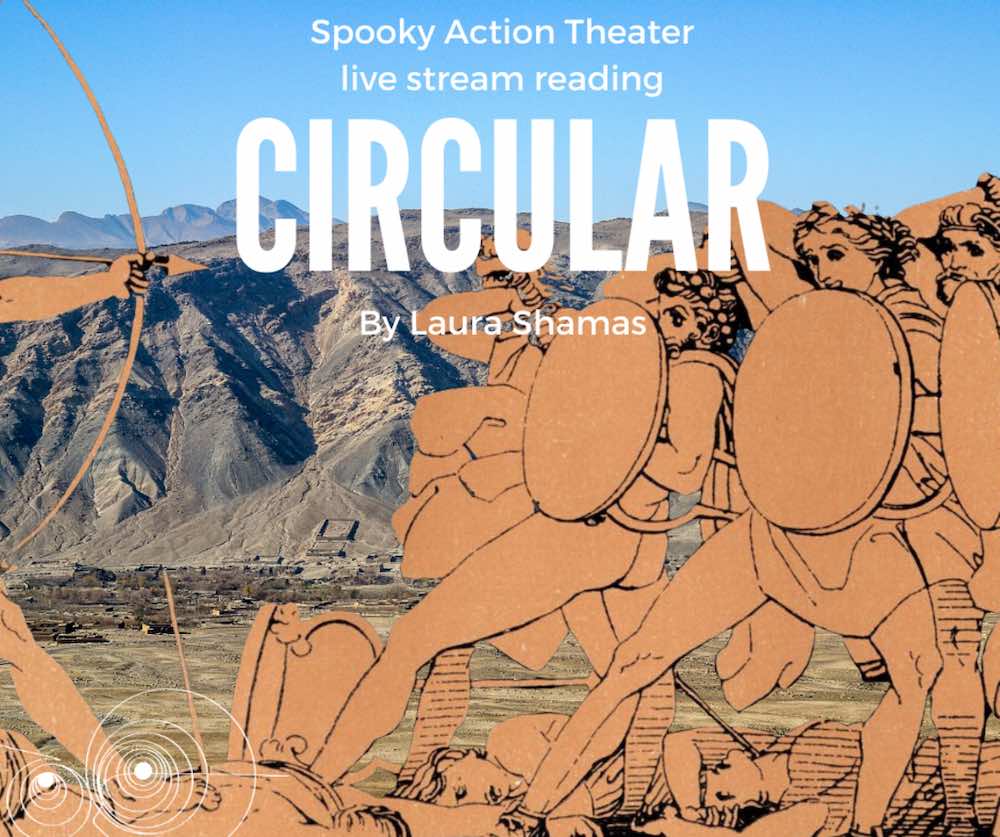 Roberta: When did you write Circular and where did the idea come from?

Laura: I wrote the first draft of Circular in February 2015 for a reading slot I had at the Lark Theater in New York. I started by wanting to reframe the way we think of Circe; the whole plot and psychological approach followed from there. I was especially interested in the theme of “The Wounded Healer.”

This play has already been performed on stage. Did you change anything since?

Yes, I revised the play a lot after the production last year. I even cut my favorite scene. Very eager to hear this version!

Do you believe that the psychological impact of war on veterans should be a theme more common in theater? Why?

Yes. The psychological impact of war on veterans is a very important topic: those who serve our country make enormous sacrifices. Often, veterans do not receive the care they need upon returning home, and plays that address this can help raise awareness, and hopefully contribute to collective action around how we should help our veterans. When Circular was produced last summer by AlterTheater in the Bay Area, I donated my royalties to the VA, in the names of the creative team, the cast, and the crew.

How do you connect this theme to The Odyssey?

With Circular, I’m trying to bring focus to a female perspective to the issue of PTSD, and the archetypal concept of eternal war. It’s connected to The Odyssey, for me, because you can see that patterns of certain characters, their behaviors, stories, and their hopes and desires are repeated today. You just have to know how to look for them. For me, mythology is a roadmap to navigating the human condition in the contemporary world.

I understand that Circular is not about racism, but taking in consideration that your multicultural background includes Chickasaw and Lebanese heritage, I was wondering what is your opinion about the current demand for justice and racial equity?

I completely support the demand for justice and racial equity that sweeping the globe! It’s ages overdue! I hope real change will come!

Is it the first time the play will be read on Zoom?

Yes, it is my first time. I am so impressed that Spooky Action Theater will be reading my combat play on Zoom! Can’t wait to see it, and I’m sure I’ll learn a lot from it! I’m very grateful for this opportunity, especially since we’re all struggling during the pandemic, and we need theater companies to help hold us together in a form of community whenever/however it’s possible. Thank you for supporting new plays, especially during the pandemic!

What kind of reaction do you expect from the audience?

I hope the audience will connect with the show! It’s always my goal. I hope there are aspects of the show that will resonate for everyone today: doing what you think is right under great duress, working hard through extreme stress, and caring for others in uncertain times.

Laura Annawyn Shamas was born and raised in Oklahoma, and has lived in various places across the U.S., including Tulsa, Denver, and Los Angeles. She writes in multiple genres: theatre, non-fiction, fiction, film.

She graduated from UCLA (B.A. in Theater), the University of Colorado at Boulder (M.A. in English/Creative Writing), and Pacifica Graduate Institute (M.A. and Ph.D. in Mythological Studies). Shamas began studying mythology in 1997, and received her Ph.D. in 2003.

Shamas has written over forty plays and has had many plays and essays published, as well as a dramatic writing textbook (Playwriting for Theater, Film and Television, 1991). Her archetypal study “We Three”: The Mythology of Shakespeare’s Weird Sisters was published in 2007 by Peter Lang USA. She has worked in film as a screenwriter and as a consultant. Her book of essays is titled  Pop Mythology: Collected Essays (Telemachus Press, 2012).

Her multicultural background includes Chickasaw, English, French, Irish, Lebanese, and Scottish heritage. She is an enrolled member of the Chickasaw Nation and is married to award-winning writer Jon Klein. Her playwriting is archived in the Native American Women Playwrights Archive at Miami University, Oxford, Ohio. In 2017, she won the Von Marie Atchley Award for Excellence in Playwriting from Native Voices at the Autry for her short play Seeds.

Laura is on the American Theatre “List of Native Theatres and Theatremakers.”